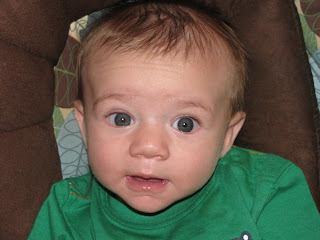 We had fun last week watching the first football game of the season.

Here's D, ready for the game. 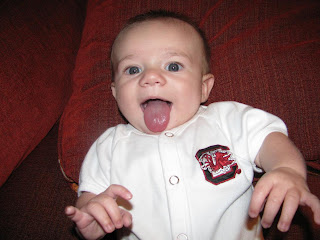 It was a little past D's bedtime, so he wore Gamecock PJs to bed to bring them good luck since he couldn't watch the whole game. This is one cute little Gamecock!! 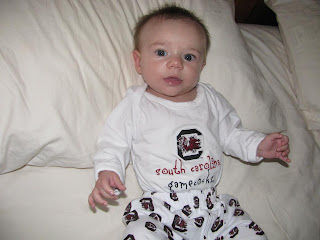 Over the Labor Day weekend, we met our great friends Steph and Kevin for a quick trip to . We had a great time, and Derrick spent his FIRST night in a hotel! He did very well. I always worry when he spends the night away from home...he's kind of picky about where he sleeps. We took his pack-&-play, and he did just fine. We'll make a little traveler out of him yet!

Monday we went to the Biltmore then did a little shopping. (It's always fun to check out malls in other places!) If you've never been to the Biltmore, it's really a neat place...imagine growing up in a 175,000 square foot house (that covers FOUR acres) and having 8,000 acres to play on! WHAT?! They are completely restoring the house, and it really is cool to see the process of recreating wallpaper from the 1800s and other crazy historical things. There are acres of beautiful gardens, but we had to cut that visit short. There are so many steps! It completely defeats the purpose of having your child in a stroller when you have to carry the stroller. I wish I would have gotten a picture of Justin and Kevin carrying it! Derrick looked like a king being carried on his throne. Funny, but really annoying! 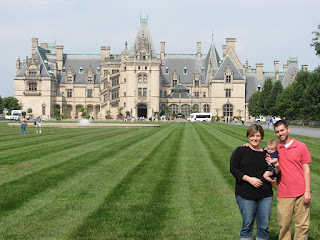 Here we are on one of the massive porches. What an amazing view! 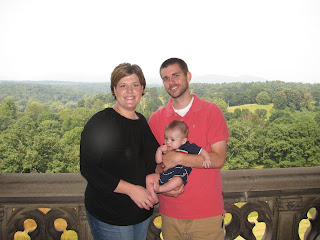 Some of you will think this is mean, we thought it was funny! No, we didn't feed him pizza, but he kept watching us eat and opening his mouth every time one of us would take a bite. He knows what to do and is ready for some real food. See... 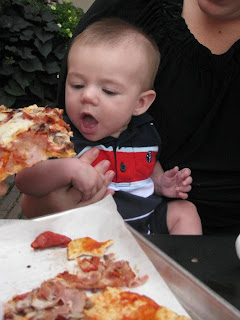 The busy day wore the little guy out! 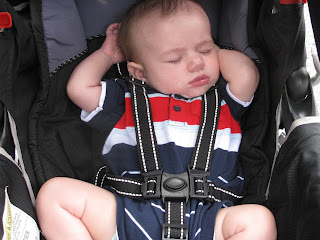 When we got home, I took a deep breath, and decided that instead of putting D to bed here 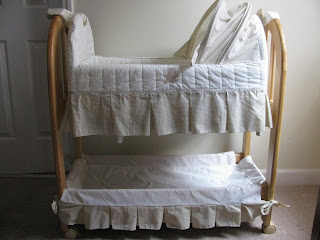 I would put him here. 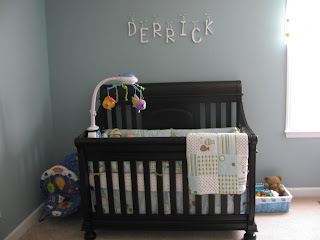 Here he is after he fell asleep. 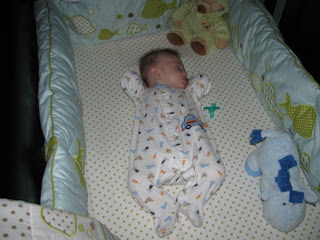 And in the morning after a good night's sleep in his big bed... 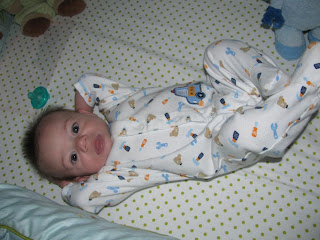 I wasn't sure I was ready, but I took the advice of a few other moms (and a little nudging from Justin), and decided it was time. If I waited much longer, it would be a lot more difficult for him to transition. I had originally convinced Justin that he could move to his room after his next surgery. Well...I expected it to be sooner than later, and we figured he'd be too big for the bassinet by that time! He slept pretty well, although I don't think quite as well as in the bassinet. I'm sure he just has to get used to it.

We had a visit with Dr. Shuler Wednesday for a check-up. He said D looked good and he wants to see us back in a month unless we notice his sats starting to consistently drop. I'm really thankful we have the pulse ox. What do you do if you don't have one at home? Hmm...

Derrick weighs 11 lbs 11 oz now. He had a setback pretty much the entire week after the cath, and then again a few days ago. The GI doctor wanted us to try fortifying his food again so he could get 24 cal/oz instead of the regular 20 cal/oz. We did this, and he seemed to do fine for about a day and a half. After that, he started fussing while he was eating and refusing his bottle after a while. We stopped fortifying, and within a day he was back to eating again. He still isn't taking more than about 4 oz at a time, but at least he's eating again. We will not try the fortifying again. I know I've said it before, but that's it. No more. His tummy obviously can't handle it.

Dr. Shuler said not to worry about the extra calories. He said that would really only add fat to him, not make him grow. That makes sense if you think about it! So, by adding extra calories, Derrick will not necessarily be ready for surgery any sooner. That takes a little bit of the eating stress away...(a little bit, he should be eating more than 4 oz by now, but...)

That's about all that's going on around here. I encourage you to visit my friend Jen's site


and make a donation to help support her in a heart walk in NJ. They have a team in honor of Derrick! Also, if you live in SC and want to put your cutie in a pageant, email me (carolinacarters@gmail.com). Some of the proceeds from the pageant will go to the BraveHEART Baskets and for CHD research!

We had a tough reminder this week of just how blessed we have been so far with Derrick. This Heart World is one that you can never be comfortable in, because it seems that just around the corner there is bad news for someone. We read the page (cp:Roberts_Family) of a little guy, Jack, who earned his wings Saturday. He was a little over seven months old, and was never even able to go home. Please keep his parents, big brother, and twin sister, as well as the rest of his family in your prayers. They sure could use the extra prayers for comfort during this time that no parent should ever have to think of, much less actually face.

Please also keep Ruthie and her parents (cp:RuthYarborough) in your prayers. She has done EXTREMELY well, and should be going home today! A super exciting, but really scary time for mommy and daddy! Also, please continue to keep Jessica in your prayers as she continues to mourn the loss of Ethin and find a new "normal" in her life.

Until next time, big heart hugs and prayers! 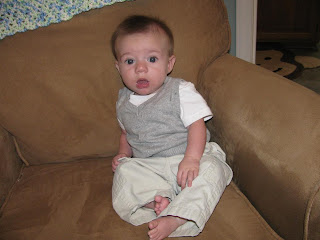 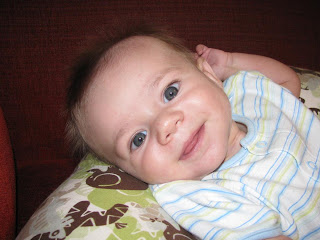 Oh, PS... If anyone has advice on how to get a nap longer than 30 minutes at a time, I'd really appreciate it. Derrick only sleeps 30-45 minutes at a time, and wants to do that about 5 times a day.... I'm thinking that's not quality sleep!