Yummy yummy in my tummy!

Since Derrick thinks he's too big for the swing and screams every time we put him in it, we went to Babies R Us and got him an EXERSAUCER! While we were in the store, we let him try out a few so he could pick out the one he liked best. Is it normal to let your kids get in toys in the store? LOL! It was really pretty funny. We had them out in the isle...people were walking by looking at us like we had just brought him in to play. The thing is, we weren't sure which one he'd like better, so we let him decide. He decided on the Baby Einstein one... 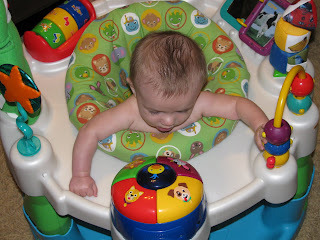 He looks pretty pleased with his choice. 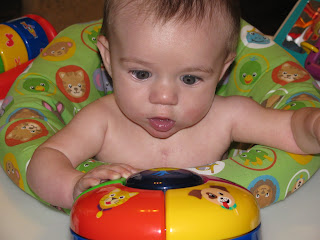 We moved on to stage 2 foods this week. D does much better with them because they're thicker. His first "big boy baby food" meal was prunes and oatmeal. He LOVED it! I couldn't get it in fast enough. 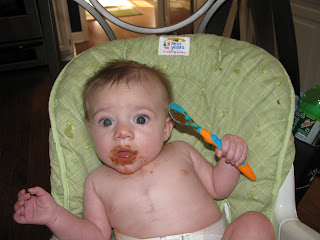 He ate half of the jar and this was all the mess he made. It was pretty awesome! However, I handed him the spoon, and it went straight to is hair. 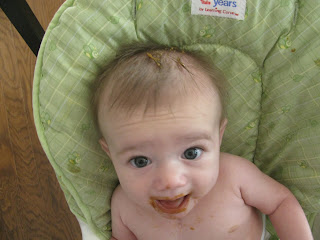 Not all food makes him this happy. We've had to start mixing applesauce in his veggies or he gags and won't eat them. It's gross, but it works, so whatever! The bottle, however, is not going as well. Derrick has decided that he doesn't want his bottle. We aren't sure if his stomach is bothering him again or what, but he cries with it and only takes about 2 1/2 ounces every 3-4 hours...yes, close to what he came home from the hospital on 4 months ago!! Ugh! This is the most frustrating thing (other than his heart, of course)!!