We made it home today about 3:00....RELIEF! It's crazy how two nights felt SO LONG when we spent 16 days at the hospital when Derrick was born. Justin and I were talking today about how difficult it's going to be when Derrick has surgery and has to stay for at least a week.

He HATED being in the hospital! His stranger anxiety has definitely kicked in. Every time a nurse came in he whined. I think he knew that they were going to mess with him, plus they all looked scary wearing masks. You could just tell he was uncomfortable. I didn't realize he would care that much about not being at home. I guess I underestimated the little guy, because he is...
(read his shirt :) ) 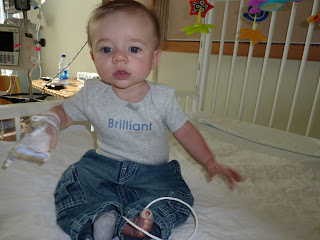 D was READY to go home. As soon as they mentioned the word 'discharge' he was in his big boy clothes and waiting to be unplugged!

He slept better last night, but it was tough getting him to sleep. He fought so hard to stay awake, but he finally gave in. We had the screaming kid down the hall again last night, but they didn't wake D like they did the night before. Thank goodness! I think he was that exhausted. I know Justin and I were! 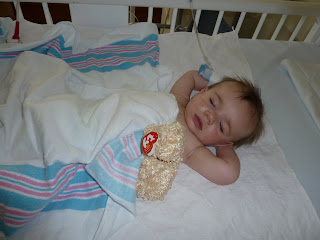 Yes, even in the hospital he slept with his hands behind his head.

Once we got home Derrick was a different kid. He was so relaxed and happy. He just smiled and talked and played with his toys. It was so sweet. He took a nice nap in his bed and was ready to go to bed tonight and his regular time. He wasn't fussy at all. What a nice change. :)

Justin is still a little questioning of the UTI diagnosis. If it wasn't a UTI, we're still trying to figure out what happened. Derrick had no clinical signs of any infection. He is uncircumcised (they wouldn't do it b/c of his surgery) and that made it difficult to get the catheter in. Justin's not sure that it's not a contaminant. It's just so weird that they "caught" it right at the beginning of the infection. One of the doctors even let on a little that she wasn't exactly convinced, but since he was fussy, they were going to go with it. They really had no other explanation.

We have to go to the pediatrician in ten days after D finishes his antibiotic for him to be tested again and then he'll go for a VCUG. That will help let us know if there are any structural issues. They want to eliminate any structural issues being the culprit versus just him being uncircumcised and being at higher risk of a UTI.

He had an ultrasound to make sure there wasn't any kidney damage, and that looked good at first glance. The doc hadn't had a chance to read it by the time we left. We'll pray there's nothing wrong with his 'insides' and that we don't have this crazy scare again. We have some further research to do on this whole issue.

Once we got home and I was rocking D in his own room and his own rocking chair, all of this really hit me. I realized just how blessed we were (and are). Our first ER trip was so much better than it could have been. The whole time D was at the hospital he was able to sit up and play and we were able to hold him. It could have been bad, but God has blessed us once again. I know we'll have emergencies, it comes with the territory. I know healthy kids have emergencies, but heart kids are pretty much guaranteed to scare their parents to death every now and then. I am so thankful that after only two nights in the hospital we were able to bring our sweet boy home, back to his normal life. Nothing extra except ten days of an antibiotic and a few doctor's visits. I can handle that any day. I'm just thankful for our little miracle. I'm also thankful for all of you who love and pray for our miracle.

The whole stay wasn't bad. D had fun with his new toys while there were no scary masked nurses in the room...check him out.

Thanks for everything. We appreciate it more than you'll ever know!!!