We've had a busy week so far! Derrick has seen three doctors this week and it's only Wednesday! They were all planned (so no worries!) and hopefully that's it until D's 6 month checkup (late, yes, b/c of his heart cath) in a few weeks.

Monday we took D for his follow up from the UTI with Dr. Bonnett, his pediatrician. The first thing the nurse did when she took us to the room was go get the pulse ox. Yep, he's looking a little blue! His sats were in the high 70's, which is right about where they're supposed to be for now.

Dr. B said that looking at D's report from the hospital, that he did have a UTI. It was slight, but there was infection there. They ran a urine sample to make sure that D is free of infection now, and from the test in the office, he is. They have to send it off and will call us later in the week for an appointment to have a VCUG done. The VCUG is an x-ray where they will check for reflux in the kidneys and any abnormalities in D's urinary tract. They do this when boys get UTIs because it's so much more difficult for them to get them than it is for girls. They just want to make sure that everything is working properly and in the right place. We pray that this is normal and that there's not anything else wrong with D's anatomy. He really has more than enough in the wrong place for one person! 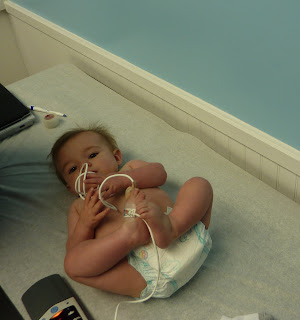 D being a good little patient! 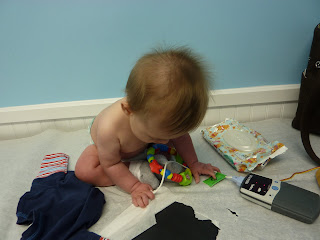 Anyway, Dr. Shuler wants us back in a month and he'll do an echo and we'll just see what's going on with sats and everything. He told us that based on D's trends, we could expect surgery around the end of the year or the first of next year.

Today we went to the Pulmonologist to get Derrick's Synagis injection (to protect him against RSV). So we met ANOTHER doctor, but hopefully we'll only see him when we're there for D's shot. He'll go once monthly until February. Boy, thank goodness for insurance!! That's all I can say about that one!

That's about it for now. Hopefully that's all the medical news we'll have for a while and we can just hang out and have some fun.

Here's a cute video to show you how much Derrick LOVES the dogs! This is him playing with Andy. (He's the one who had heart worms a few months ago. Thankfully he's been cleared and his house arrest is over. We're so glad he's well.) Make sure your volume is up!

P.S. A few of you asked for the roasted pumpkin seed recipe. Sorry it took so long! I totally forgot about posting it, but if you still have pumpkin seeds, here it is:

In a medium-sized bowl, whisk together egg whites, sugar, cayenne, cinnamon and salt. Add the pumpkin seeds and toss to coat.

Spread seeds in a single layer across the parchment-lined baking sheet and bake for about 15 minutes. Stir them up a bit and pop them back into the oven until golden in color, about 5 minutes more. (Rachael Ray)

Let me know if you try it and what you think!!