Derrick always seems to draw attention, especially from the ladies. Tonight in the grocery store was no exception. However, he was obviously posing as someone else. People kept talking to him, making comments about him to the other person they were with, and even saying, "What a precious little girl!"

He had on a blue shirt and had a blue blanket over his legs. 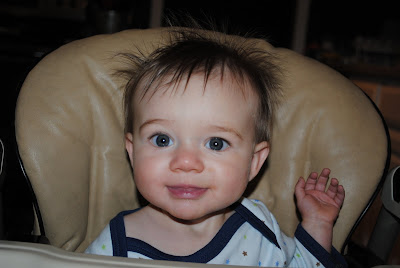 Actually, this is the shirt he had on. Now, maybe the stars look like polka dots? Maybe it's a little girly?

Maybe it's the hair.  But let me tell you, if it's the hair, there's not a thing I can do about that! LOL!  There is one chunky row of hair straight across the crown of his head that will not lay down.  At all.  If it's dry, it's standing at attention! 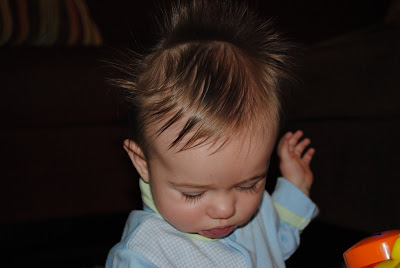 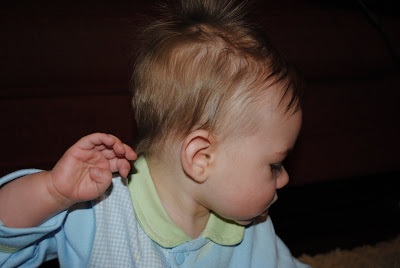 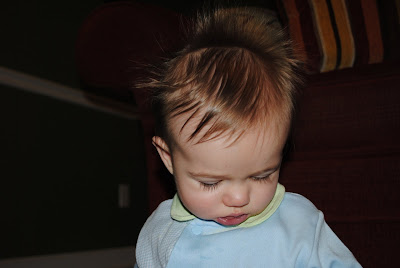 And that's just the way it is.  Yes, we could cut it, but I'm not ready for him to have a hair cut.  It won't solve the sticking up problem anyway, it will just stand straight up shorter, that's all.  I actually think it's really cute.

But I assure you, if he were a girl, he would have large bows in all that crazy hair!

It really doesn't bother me that people mistake him a girl.  I know sometimes it's hard to tell.  I truly take no offense to it at all.  I think it's funny that he seems to get so much attention.

Anyway, this past weekend we went to Tennessee to see Nana, Aunt Shirley and Uncle Gary.  We had a lot of fun hanging out with them. 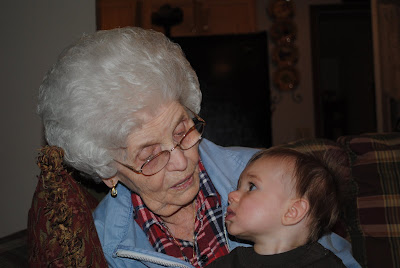 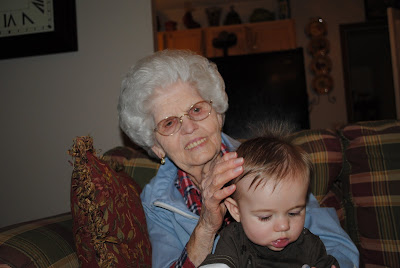 Yep, Nana was trying to fix his hair!

We met Stephanie and Kevin on Saturday and did some shopping.  It was fun to see them again, and D was especially glad to see Kevin. 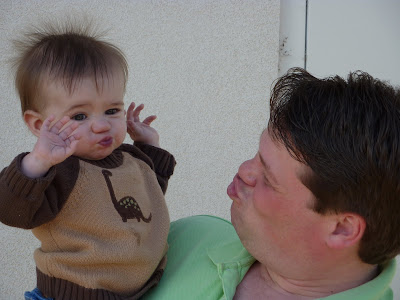 They have a strange 'stinky face' bond.

We went to Chili's after shopping all day, and Derrick enjoyed himself. 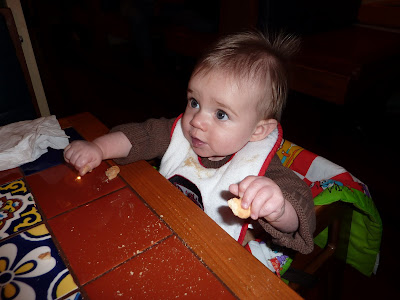 It bothered me to no end that he was putting his food on it, but... 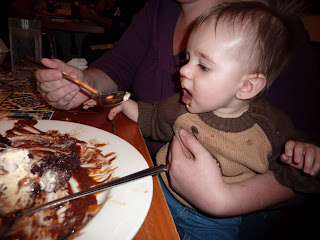 Derrick insisted that we order the Molten Lava Cake since he's allowed to eat table food now.  I'm pretty sure this is not what Dr. Bonnett had in mind, but he said to give him whatever he would eat!  The kid likes sweets!!

As much as he enjoyed dessert at Chili's, D is still concerned about something... 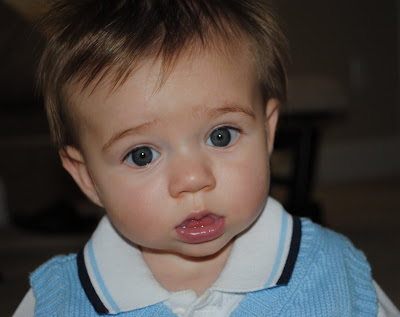 P.S. Would you please keep our friend Parker in your prayers? Some of you may remember us mentioning that Justin's sister had a friend, Amy, who was expecting a little boy named Parker in August. They were told that Parker had fluid on his brain and they were worried about the development of his corpus callosum. After birth, they found out that Parker's brain was fine (a complete miracle!), but he has quite a few VSDs (Ventricular Septal Defects, aka holes in his heart). Parker was hospitalized Friday because he has been struggling to gain weight, and has recently lost weight. He will be having surgery in early December, but will most likely be hospitalized until his surgery. I've enjoyed getting to know his mom over the last few weeks, and I know that this is scary and stressful for all of them right now. Please go by and visit Parker's blog and keep him and his family in your prayers!