I'm so sorry that this is so late...I have lots to say, and NOT a lot of time to mess on the computer anymore!

Tuesday night, after arriving in Charleston, we wanted to do something fun.  I had been dying to take Derrick to see Santa, but for some reason I hadn't.  I have no idea why I waited, but this was our last chance.  So on December 22 (note to self...don't wait this late next year), we stood in line to see the big guy.

This guy was stoked! 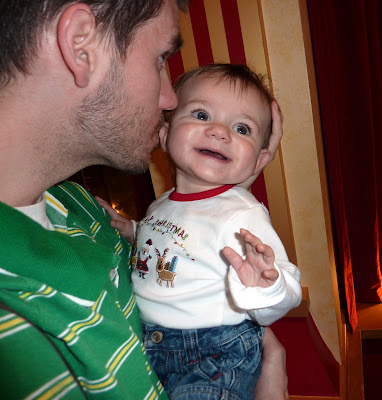 However, he was not so exited when it came time to actually let the Big Guy hold him. 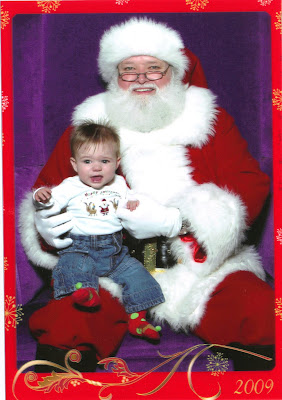 That's ok, though.  I didn't care how the (incredibly overpriced) picture turned out, I wanted one.  It's his first Christmas!  You've gotta have a Santa picture, right?!

That night when we got to our hotel, we realized we forgot the pack-n-play.  Uh oh!  We knew this was going to be interesting.  Now, Derrick has NEVER slept with us at night.  Ever.  We didn't want to start that, and we're far to paranoid that we'd roll over on him or cover him up, or something.  We usually put him in his bed and he cries for a minute and goes to sleep.

Well, since we were all sleeping together, we had to go to bed together.  Justin left the tv on so we could see (and b/c D does NOT like to be in the dark), and we all assumed our positions.  Justin and I were each as far to our respective sides of the bed as possible, cover was low, and D had plenty of room in the middle of this king sized bed.  He cried for about a second, then he realized that we were going "night night" with him.  He turned to me and started laughing!  He was so excited!  Then he started grabbing my face, you know, to make sure this was really happening.  He would look over at Justin and clap.  We knew this was going to be a long (but really funny) night.

For the next hour D laughed, clapped,  grabbed faces, and talked.  He was having a great time.  Eventually we all fell asleep, but I think D is the only one who got any quality sleep.  Poor Justin was on the side where the air was, so he was either burning up or freezing all night, and kept getting up adjusting it because he was worried about how hot or cold D was.  I hung on to the edge of the bed all night because D decided to turn perpendicular to me and wanted all of the bed.  Needless to say, 4:45 am came much too quickly, but we made it through, and no one got hurt!  It was definitely an experience.  One to write down in the books!

Anyway...we got to MUSC and got D checked in and he got his dose of Versed so he wouldn't mind leaving us.  This is the first procedure he's had where he's been aware of strangers, so I was pretty worried about them taking him back.  He didn't mind a bit!  That made the experience a little easier!  I wouldn't have been able to handle it if they would have taken him away crying.  They probably would have had to call security on me!

This cath seemed much longer than the last one, and about 30 minutes before they finally told us we could go back, we were getting really impatient and worried.  When we walked in and he heard us talking he started crying.  Poor baby.  I know he was worried we would leave him again.  He really didn't settle down after that, and he kept reaching for me and crying.  After a cath you're not supposed to sit up for two hours because of the risk of bleeding.  Derrick was reaching so much that they let me hold him (yay!) early, I just had to make sure he was completely flat.  Not easy, but I'd take it to hold my little man! 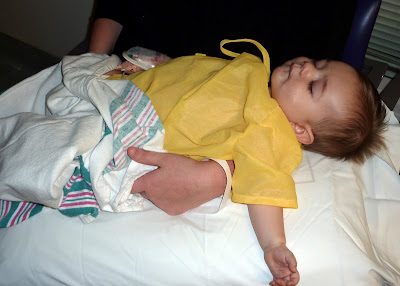 When the doctor came in to talk to us about the cath, she said that it went well, and that his pressures looked good for the Glenn.  "He can have it anytime within the next couple of...months," she said!!  I think my heart stopped.  Justin and I looked at each other, then she said that surgery would most likely be in the next couple of weeks.  Whew!  There's just no way we can keep this wait, watch, worry thing up for a few more months!

She also told us that while they had D on the table, that he had some spells of atrial tachycardia, meaning his heart was beating too fast.  While this was alarming to us, they weren't super worried about it.  It can easily be controlled with medication, and many kids have tachycardia after surgeries.  The strange thing is that he didn't have it while he was in the hospital the first time, when he had his first cath, or when he was hospitalized in October.  They said that it could have been caused by the cath (although I'm not sure if it started before they actually started the cath or not, I forgot to ask that), or that it could be from dehydration.  His blood was slightly acidic, meaning that he was a little dehydrated, so...I don't know.  Unfortunately that's another worry.

They sent us home with a Holter monitor to monitor his heart for a solid 24 hours.  We sent it back Monday, so we should hear from them about that shortly.  We're thinking if they see anything too abnormal, surgery will probably be a little sooner so they can get him stabilized on medication or whatever they're going to do about that.  We're praying that it was really nothing, but are glad that if indeed it is something, that they caught it now and can fix his little heart yet again.

When the anesthesia really started wearing off and D woke up, he was not a happy camper!  He didn't like the wires hooked up to him, and just felt bad in general. 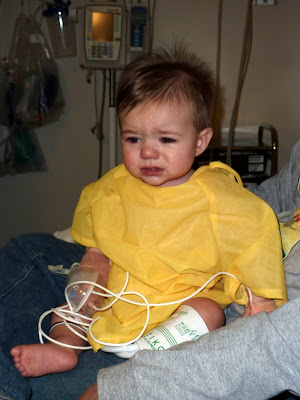 "Look what they did to my hand!" 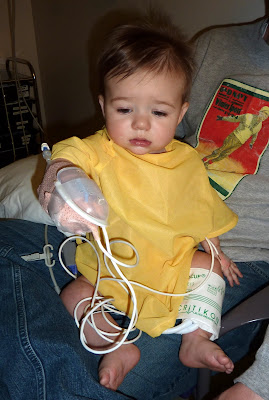 Once they told us we could go, and we unplugged him, dressed him and walked out the door, he was a different kid!  He started smiling and giggling!  He is SO funny! 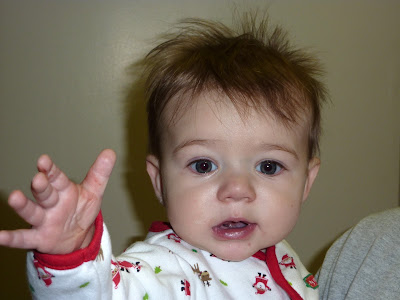 I have more Christmas stuff that I need to post.  Yes, I realize that Christmas is over, but this is for my little man's books.  Sorry! :)

Thanks for all of the prayers, emails, and phone calls during, before, and after the cath.  They mean SO much to us!!!  Please keep our other friends in your prayers, and especially Logan, who had a cath today.