Sorry if you've been wondering about us....we've been great, just B-U-S-Y!

Derrick went to see Dr. Bonnett (his pediatrician) on Thursday, and Dr. Shuler (his cardiologist) on Friday. Both of them were pleased with how he looked and sounded.  Dr. Shuler said D sounds "boring" now...just a "lub-dub," no "swish-dub" anymore since the shunt is gone.  We have to go back to see him in two weeks and he will do an echo to check everything out and to have something to compare to as time goes on.  Eventually we will move to appointments every three months, which totally freaks me out!  We've NEVER  been that long without seeing him.  He said not to worry, that he would wean us down to that. :)

Dr. Bonnett removed D's last chest tube stitch on Wednesday, and he didn't even cry!  Such a big boy!  We have to go back to see Dr. Bonnett next week for a weight check because D weighs 13 lbs 11 oz now, and weighed 13 lbs 14 oz before surgery.  Of course we're all concerned about this whole no fat diet thing, so he wants to keep an eye on his weight.  I think at this point we just want to make sure he isn't losing weight.  I'm kind of doubting he's going too gain much on this little diet of his.

Heidi, D's speech therapist, came Friday.  Derrick wasn't very cooperative at all, but she gave us some good ideas of foods that aren't pure sugar to be working on, and some good recipes too.  It's tough finding something with a decent amount of calories and no fat that isn't junk or just plain gross.  Only five more weeks to go...and you better believe I'm counting down!

The formula is going a little better.  We were really worried at first, because the day D came home he only drank 5 ounces total for the day.  He's slowly increased to a more reasonable amount.  The very minimum he needs is 20 ounces per day, and today I think he's taken about 19 ounces.  This Portagen must not hold him over as long, because he's been waking up at about 4 a.m. and eating again.   I'm ok with that...as long as he's eating, I'll get up and feed him!

He's been doing this strange tounge thing too.  Anytime something solid goes in his mouth, he chews it for a second then sticks his tongue out and lets the food fall out.  He does it when he's not eating too.  He'll just sit there with his tongue out has far as it will go.  We're not sure if it's a result of being intubated, or teething, or both.  I hope it goes away soon, whatever it is.

Over all, Derrick is pretty much back to his old self.  Surgery has not slowed him at all.  He is still attempting to crawl and pull up all the time.  We were reassured that he wouldn't hurt himself, so we're mainly trying to make sure he doesn't fall or put any pressure on his chest.  Not an easy task, let me tell you!

D gets pretty fussy at times, but doesn't appear to be having any chest pain.  There have been a few moments where we've really felt like terrible parents because we blame his fussiness on him being tired (he's NOT napping very well at all).  Poor guy...we give him his pain medicine and about twenty minutes later he's a whole new kid.  Obviously he's having "Glenn headaches."  Apparently these can happen for weeks after surgery because his body is still adjusting to the new blood flow.  Any of you with experience with this, PLEASE share!!  We hate to give him oxycodone very often, but that seems to be the only thing that helps when he's super fussy.   We're still giving some tylenol twice a day usually, and we've had to give him oxycodone once a day for the past few days.  It's SO hard that he can't tell us if he's hurting!


The "stinky face" is back with a vengeance.  This crazy kid is always making this face!
I guess he's happy?!  I've tried to get it on video several times, but he's too smart for that,
and will stop as soon as I start recording. 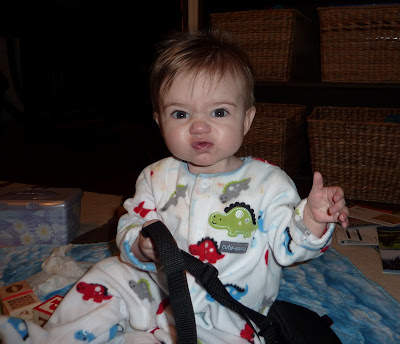 No, I'm not a huge fan of this, but Derrick has been enjoying fat free hot dogs.
I thought he was doing such a great job eating until Justin picked him up out of his high chair, 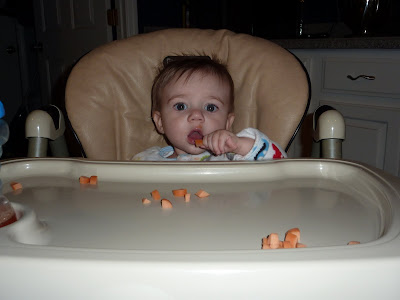 and we found out what he'd been doing. 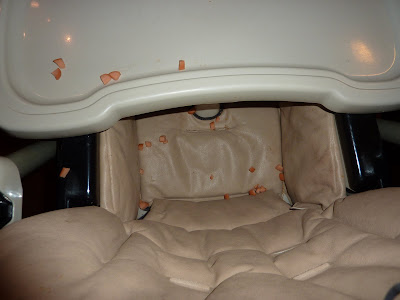 It takes serious work getting food in this kid!  I caught him handing food to the dog under his tray today.  They LOVE that he's eating real food, but that he doesn't really eat the food!!
Derrick has enjoyed being back on the computer (maybe that's why I haven't had a chance to update),
and he loves reading all of your comments! 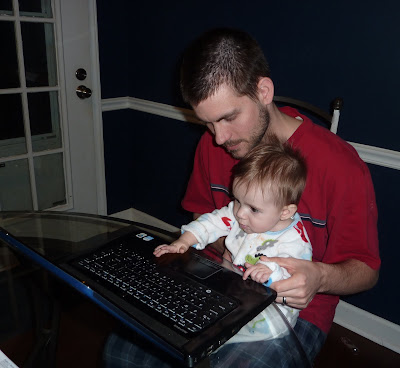 He's happy to be back at home with all of his toys, 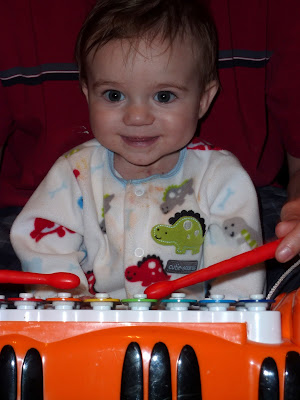 and has become quite obsessed with his Funky Heart Cardiac Kid wooden nickel and his balloon from Ivan.  We think he's tried to say "balloon" a few times and he reaches for it anytime it's in sight. 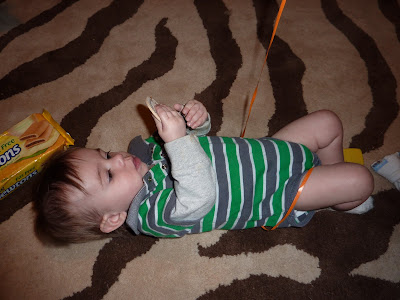 D was excited get this package in the mail from Aunt Shirley the other day.
A glow worm!  I didn't even know they still made these, but he sure does love it!
Thanks Aunt Shirley!! 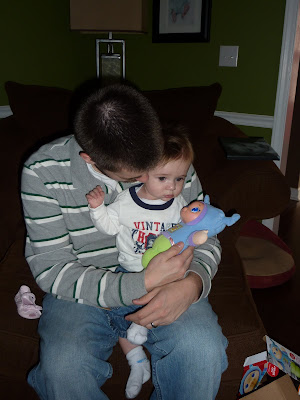 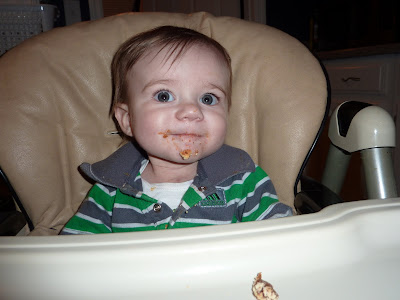 He has become quite independent lately, and insists on feeding himself. 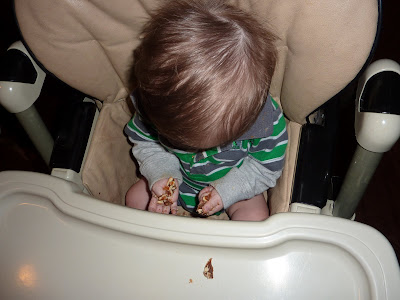 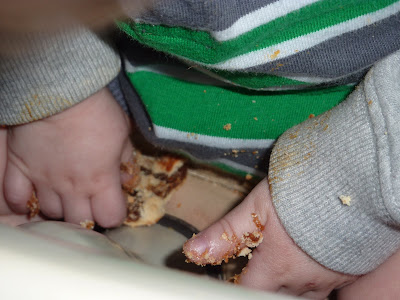 We've been working on putting our house on the market (yes, again), and Derrick
has helped with a few projects that we've done over the last few days.  We're going to look at the
same house we looked at a few weeks after he came home from surgery the first time.
It's still there, and still calling our name, so we'll see...keep your fingers crossed!! 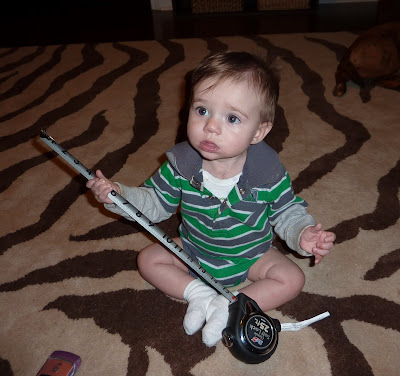 D would like to thank all of you for buying tickets to the pancake breakfast
that is quickly approaching this coming Saturday.  If you don't have your tickets,
please email me (carolinacarters@gmail.com) so you can get yours!!! 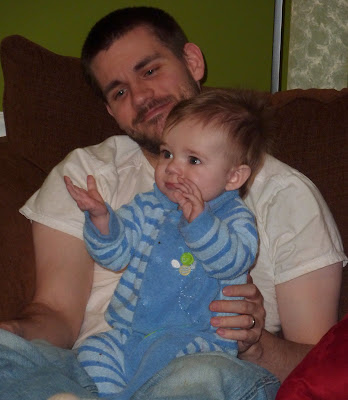 We're getting nervous about it!  We SO want this to be successful, so if you're in the area, please, please come to Fatz Cafe on Broad River Road Saturday morning anytime between 7:30 and 10:30 for some good grub for a great cause!  All proceeds go to MUSC for CHD research.  We would love to have a full house, so tell your friends and neighbors, and come on out!  We've been asked if Derrick will make an appearance at the breakfast, and as long as everything is well, he will come by.  If you really want to know what time that morning, I'll check his calendar and notify his driver so she can get him there, and I'll let you know. :) Lol!
To those of you at church who were going to get tickets from us today, call me, email me, or just show up!!  You can still come eat (please!!)!  And if you don't live around here, church was canceled because it's icy (and we had a couple of flurries earlier).  I know some of you northerners will get a good laugh about that, but it just doesn't do that around here, and we all stay home when it does! :) 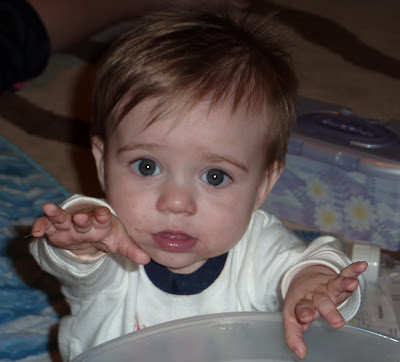 Hugs to everyone!
Thank you for your continued support and prayers for Derrick.  We appreciate it A LOT!!
Please continue to keep Ruthie in your prayers too!!