D has LOST his mind!

Last night Derrick officially lost his mind! He has absolutely earned the name "Party Animal" and it couldn't be more fitting. Or exhausting.

As you know, D's diet has changed to "no fat." Well, guess what they use to replace the fat that's being removed? SUGAR! Guess what that does to a little boy with an endless supply of energy already? It gives him an unimaginable amount of energy that he has no idea what to do with!

Most of you know that Derrick has issues eating anyway.  He's never been a little piggy and usually seems as if he doesn't care if he eats or not.  Then to take away the yucky Alimentum that he's been eating and change him to Portagen...forget it!  We didn't taste the Portagen, but it smells like a bottle that I've accidentally left in the car for a few days in the middle of July.  Seriously, if I didn't know better I would have sworn they were trying to feed my child rotten milk!

Needless to say, that didn't cut it.  We've gone to skim milk.  Alone, D will drink it ok.  The problem is it's skim milk.  It has a little over 10 calories per ounce.  We've been adding protein powder and chocolate syrup, which boosts the calorie count pretty well, but most of it is thanks to the syrup.  The problem with the syrup....an incredibly hyper little boy!  By the time the energy wears off the extra calories have been long gone!  It's kind of a lose-lose situation.

Case in point:
Last night around nine-thirty Derrick was given his last chocolate milk and protein bottle of the night.  At about 11:30 we decided it was time for him to lie down for bed, ready or not.  Of course since we're here we can't let him just cry himself to sleep like we do at home (and he usually cries for about 2 minutes, tops), so one of us has to stand by his crib so he can see us until he falls asleep.  (Rotten, yes, but what do you do?)  Last night instead of wallowing around like he usually does, D was on his back slamming his feet, clapping, and making "the stinky face!"  He wouldn't stop because clearly he was having a blast!  This went on for at least 45 minutes until we finally let him sit up and play.  He kept trying to pull up on everything he could reach and was trying to stand up by putting his hands down in the crawling position and putting his feet down and fanny up.  If he could have kept his balance he would have been standing.  Ridiculous!  He was dancing and flapping his arms...he was just out of control (hence the reason you didn't get an update last night).  Several nurses stopped by our room to laugh at D's insanity and dubbed him the "party animal."  Is anyone noticing a trend here?

Anyway, he finally fell asleep about 1:30 am, and we learned a lesson.  Extra calories or not, there will be NO chocolate syrup after about 2pm.

Overall, there wasn't really anything new yesterday.  Mamaw and Papaw came and Justin and I were able to leave (in the car!) and have lunch.  It was nice to be able to get away for a couple of hours and know that D wouldn't be upset.

This morning we were told that best case scenario of us leaving would be Wednesday.  All day yesterday Derrick had 20mL of drainage, and the minimum for them pulling the chest tube is 18mL in 24 hours.  Dr. Bandisode said that he had to be at the 18mL mark or less for two days in a row.  The numbers aren't great for today already...he's had 14mL by about 8pm.  We definitely don't want it pulled early, but...

They started D on enalapril this morning.  There was a study done that found when given an ACE inhibitor (type of blood pressure med like enalapril, captopril, lisinipril) after heart surgery, the duration and amount of chest tube drainage was decreased.  They put D on it to try to get his drainage to slow down, but Dr. Bandisode said that he would likely be on this indefinitely because it helps preserve ventricular function.  Since Derrick has only one ventricle, we need it to stay good as long as possible.  Hearing them say "preserve his ventricle for as long as possible" really drives home that need for research.  It brings up that harsh reality that Derrick will never be "fixed," but we're  "prolonging" his need for a heart transplant some day.  We hope his lone little ventricle can be preserved until they've figured out a better alternative, but as of right now, he's pretty much guaranteed to need one to have a normal life-span.

Today we took D out to get some fresh air.  We took a walk to the Horseshoe and looked at the flowers.  We couldn't stay long because it started drizzling, but we enjoyed it while we could. 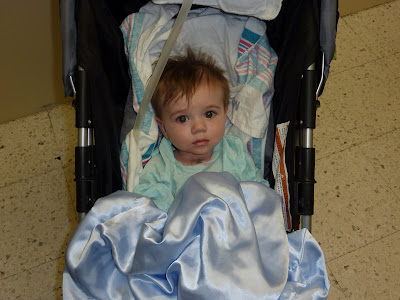 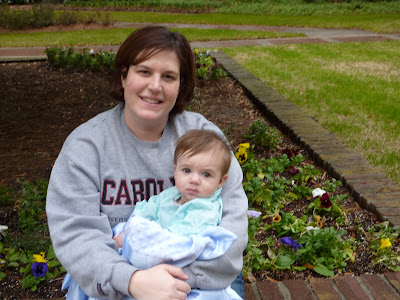 Justin ran up and down the ramps outside of the hospital pushing D's stroller, and he was making the stinky face the whole time.  I think he enjoyed his outing!

Other than that, it's been a pretty quiet day.  Our nurse tonight said that there was a rumor that D may get his chest tube pulled tomorrow, but we're not holding our breath.  He got his IV site removed today because it had "gone bad."  He hasn't needed it since Wednesday and likely won't need it, so since it was a little leaky...it was pulled!  We were pretty happy about that, and so was he!  He just stared at his hand and kept turning it over looking at it.  The boy was pleased! :)  Now if we can just get rid of this chest tube, he'll be wireless (invasive wires anyway).

Tomorrow D will have a chest x-ray, but I think that's all that's on the agenda for the day.  Trying to pump this kid full of calories and keep him from walking out of here...that's about it.  The words "NG tube" were thrown out today because of the lack of eating, but we're praying it doesn't come to that!  He tries to eat... 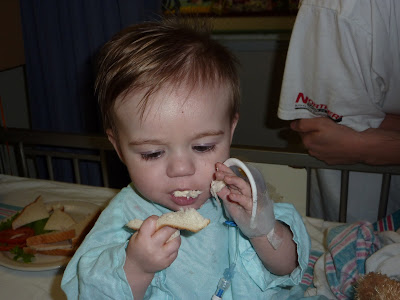 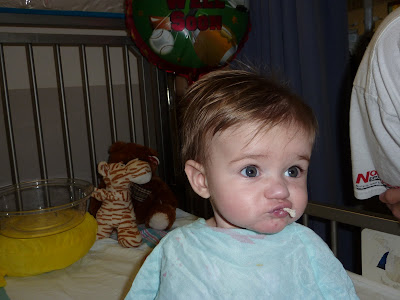 but really, it's just not enough!

Thank you so much for your continued support and prayers for Derrick.  Sometimes it's hard to be stuck here, then we look and see all of your words of encouragement and it's so much easier.  We appreciate them more than you know.  Please keep our sweet friends Laura, Josh, and Ruthie in your prayers.  I'll explain later.