Come eat breakfast at Fatz!!
You don't have to have a ticket, just come on.  Everyone is invited.  We'd love to have a HUGE crowd!  If you have no idea what I'm talking about, click here.  Derrick will be there around 10 with fat free pancakes and egg beaters in hand.  Wish us luck!!


We're still trying to break the bad habits Derrick developed while he was in the hospital, and boy has it been tough!  The worst is that he has decided that he no longer enjoys napping.  A full day with a little guy who thinks he's too big to nap can get a little rough!  D has also learned how to scream.  {Insert tears here.}  I remember Justin and I having the conversation about how loudly some kids cry, and how Derrick didn't scream when he cried like that.  Hello!  I don't know why I haven't learned not to say some things out loud!  Derrick figured it out, and he can belt out with the best of them.  And he can turn it off as quickly as he turns it on.    We're hoping he'll kick that one too, but it's not looking so good.
We went see Dr. Bonnett yesterday for a weight check, and imagine our surprise when we put D on the scale and it read 13lbs, 11.5 ounces!  He's up half an ounce!  Holy cow!  Justin and I were really just hoping that he hadn't lost weight...but gained!?  Woo hoo!  Half an ounce doesn't sound like something to be excited about, but this guy is on a fat free diet, remember?  It's tough, but we're making it.  I'm wondering if this whole diet thing is contributing to his lack of sleeping and irritability.  I know when I try one of those crazy diets I'm pretty annoyed (that's probably why I can't stick to one more than a few hours, but that's beside the point).  Hopefully we'll completely have the "old D" back in three and a half weeks.  Yep, that's how much longer we have.  Almost half way there!

I'm really bad about nicknaming; especially when it comes to pets and children.  I think our dogs have at least five nicknames each.  I can't help it.  It just happens, and Derrick is no different.  He has several names, and he will probably always be "sweet cheeks" or "cheeky" to me (which Justin is not a big fan of, but I don't really care).  We have recently added "biggy" to the list.  Ironic, because he's quite tiny, but he thinks he's B.I.G.  Often times when I call him biggy, it's in song..."Biggy" likes it when you sing to him. Don't you remember "Biggy, Biggy, Biggy, can't you see...?" 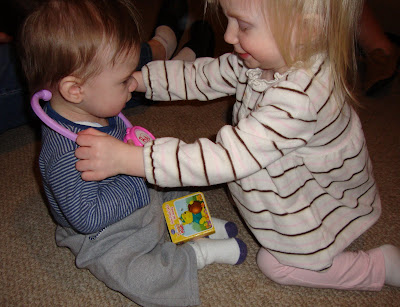 He's learning to use a stethoscope, thanks to his fellow heart buddy Lo.  She said that all heart babies biggies should know how to use one. 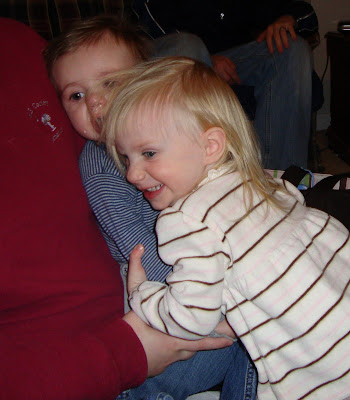 He is beginning to show interest in the girls. 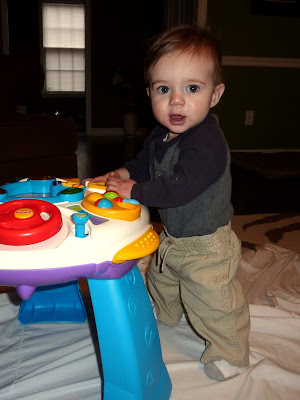 He is very proud that he can stand and play work unassisted. 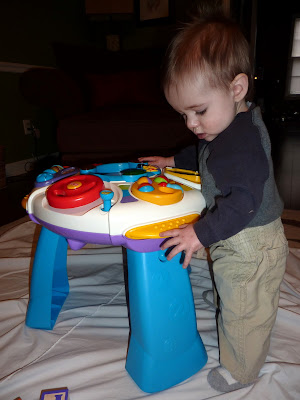 He takes his work very seriously. 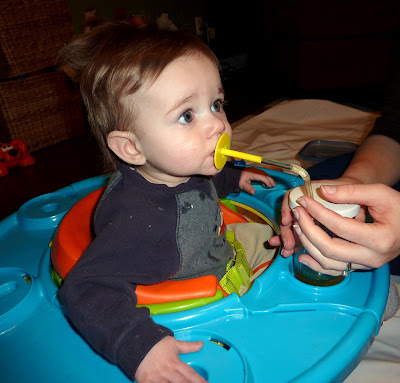 And he learned to drink from a straw!!
This is the COOLEST thing.  This cup has tubing in it, and you pump the lid, and it pushes the liquid up the straw, and into the mouth.  (The yellow thing is a guard, so the straw doesn't go in too far.)  Genius!  About two pumps later, D was drinking out of the straw with no help! 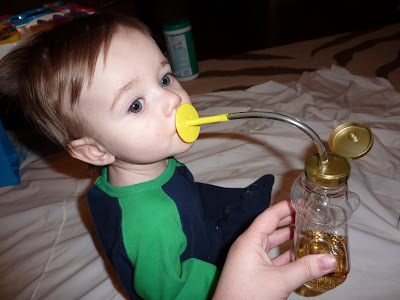 Using a honey bear and squeezing it works just the same.  Cool, right?  (That's apple juice, not honey he's drinking.)We've gone through many sippy cups, and none of them work for D.  We decided to just pull out the big guns and go straight to the straw.  He probably thinks he's too big for a sippy cup, that's why none of them "worked."  Drinking from a straw has been a goal of D's for a long time.  He's probably going to think he needs his own Sonic strawberry limeade from now on; since he's so big and all.
We're in for it when he's two!
We have a few prayer requests...
Ruthie was given the go ahead to be placed on the transplant list.  That's an answered prayer in itself, but she has a long road ahead.
Logan has an unexplained fever and they haven't been able to pinpoint what is causing it.  He had surgery about a week before D, so of course there's big concern.
Zeb is going to need surgery within the next few months.  It came as a shock to his family, because he has been doing so well.

These kids are really special to us, and we would appreciate if you join us in prayer for them and their families. 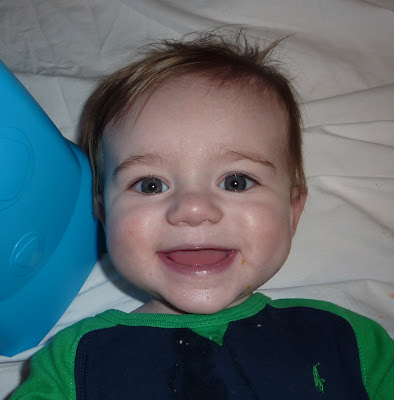 My Biggie
(complete with apple juice all the way down his shirt)!