Since our last update, things have gotten pretty interesting around here.  No one can relax with D moving about, and no one is ever safe... 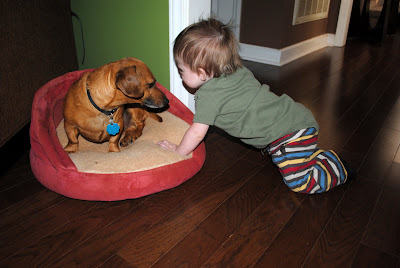 and I mean no one. 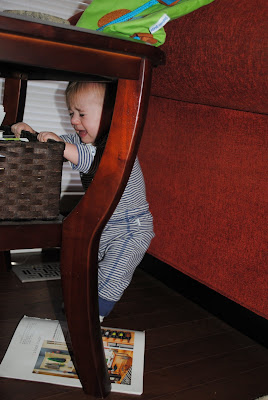 We went out to dinner to celebrate Danielle's birthday.  D and Carter enjoyed sitting together. 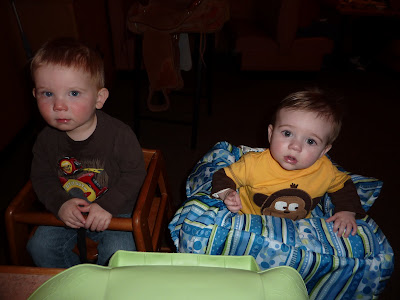 D was so hungry that he couldn't wait for his dinner to arrive. 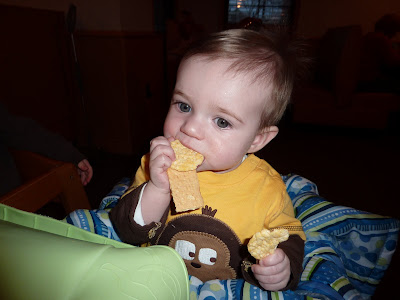 (He ordered refried beans, in case you're wondering.  We've visited more Mexican restaurants lately than ever, just because there's something semi-fat-free to order for him there.)

Forget the food.  Derrick and Carter decided that their favorite thing to eat was in fact lemons. 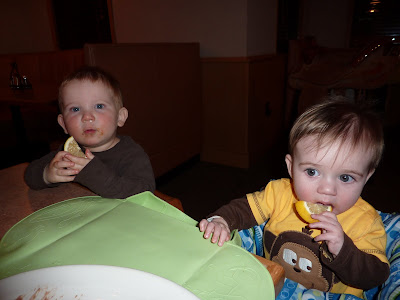 We went to the mall and sat in front of the carousel.  We were so excited about letting D ride until we realized that we only had $1 in cash and needed $2.  Sad, yes, but we're bad about never having any cash.  It's a good thing D didn't know he was going to get to ride.  I guess we would have been going to the ATM and paying $7 in fees to get on a $2 carousel ride!   He was content with watching, thank goodness! :) 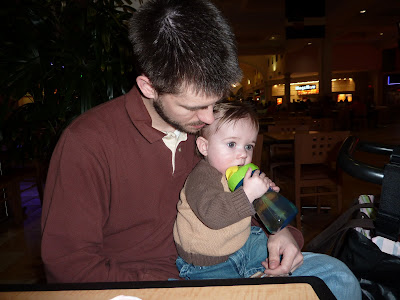 Saturday D went to his first basketball game where he got to watch Ivy, Blaine, and Sheaffer play.  He was very interested and kept cheering.  He later got bored with the game and was more interested in the people sitting behind us.  He's such an attention hog!
Between games, we played on the playground. 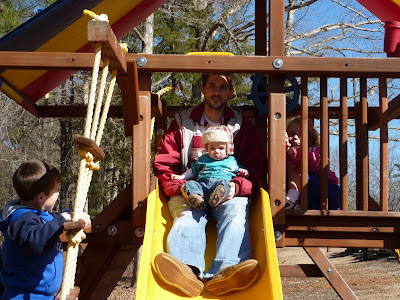 Doesn't this look like trouble?  I'm sure Blaine and Zach will be teaching D LOTS of little boy stuff! 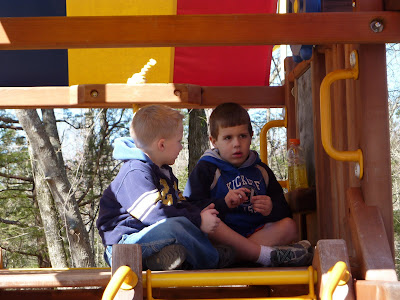 Sunday we went to Hunter and Logan's soccer game, but it was cold and D was annoyed that he had to be bundled up.  We ended up leaving before the game was over because he wasn't a happy camper.
This morning, in an attempt to switch things up a little, D had hummus and rice cakes for breakfast.  He has hummus in his eyelashes and all over his face, but he loves it!  I'll post recipes soon for a few of D's fat-free favorites. 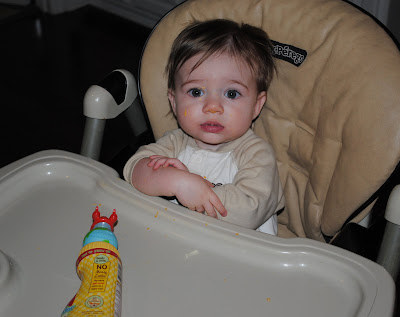 We're going for D's six week check-up tomorrow with Dr. Shuler.  Can you believe it's been SIX WEEKS since his surgery?!  He's going to do a chest x-ray tomorrow, and as long as everything is clear, D should be able to start 2% milk.  I'm not sure exactly what the plan is, but from what I understand, he'll move from 2% to whole milk then back to full fat foods.  Slowly but surely we should be back to normal!  Prayers for a clear chest x-ray and a fully healed thoracic duct!!

Please keep Zeb and his family in your prayers.  After I posted about his surgery last week, it ended up being moved.  He's actually in surgery right now...and today happens to be his third birthday.  Last I heard, he was doing well, but please keep him in your prayers.

Also, please say a prayer for Justin's Aunt Sandy.  She is having surgery tomorrow because of a brain lesion.  This was pretty sudden, and we're all worried about her.  Please say an extra prayer for her!!