This morning D went to see Dr. Shuler for his three month check up.  We were pretty nervous for two reasons:
1. It's been THREE months since Derrick's heart has been checked by a cardiologist.  We haven't gone more than six weeks without it being checked since I was 24 weeks pregnant.  A lot can change in three months and that's a pretty scary thought.
2. Derrick has developed the apparently "typical one year old" hatred of all things doctor related.  The past few times we've been to see the pediatrician he hasn't been the best patient, so we didn't have very high expectations for how today would turn out.
Boy were we wrong about #2! :) 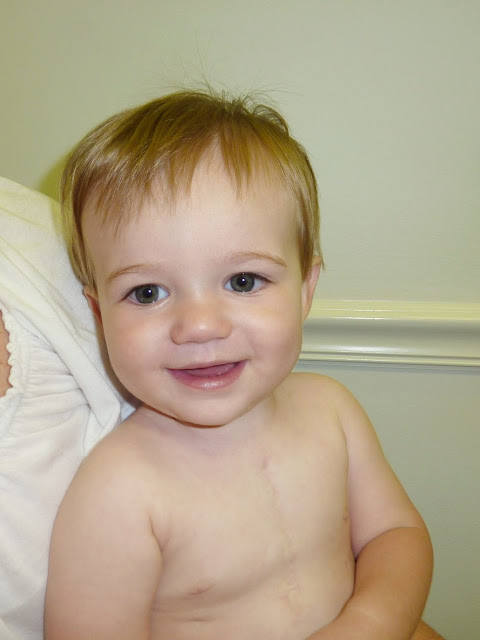 We could not have asked for a better little patient today!  While the nurse was listening to Derrick's heart he relaxed on the table with his arms up behind his head (yes, he still does that) and fully cooperated for the entire work-up she had to do.  He played happily with a toy while we were waiting for Dr. Shuler to come in, then D allowed him do all of the listening he needed to do without screaming and pushing his hands away!  So nice! 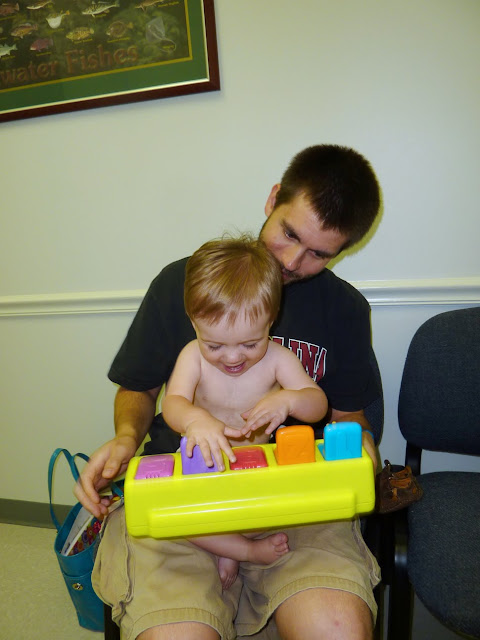 We were thinking it was time for an echo today, but Dr. Shuler said that it was time for an EKG instead.  Helen wheeled the EKG machine in the room and Derrick said, "cah, cah!"  The machine was not big and scary to our guy.  Nope, it was a CAR!  His favorite thing ever!  While Helen stickered him up she sang (D loves her singing!) and he just sat there.  She hooked the cords up to him and he sat still like a big guy the whole time. 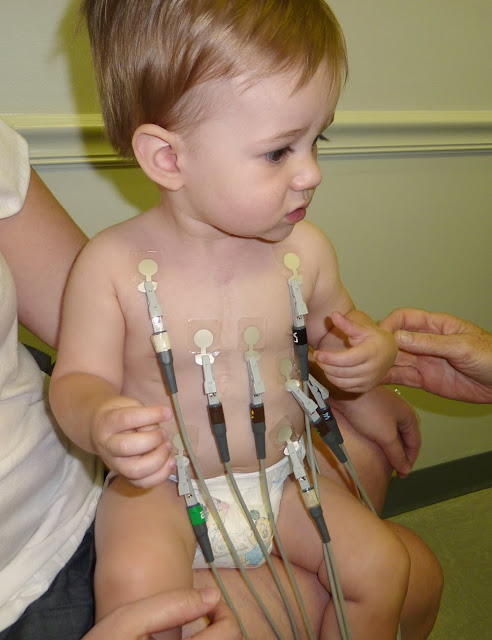 (I said he behaved, not that he was thrilled!)
Then came the most entertaining part of the day for Derrick and me...Helen and Justin had a two-man band going while the EKG was doing it's thing.  They were singing, clapping, drumming, toe-tapping and bee-bopping away.  It was HILARIOUS!  Needless to say, the stickers and cords all over his chest were not distracting at all while watching this performance!  I really almost busted out the camera to record the big number, but I'm not even supposed to be repeating what went on behind those closed doors! :)  Oops!  It slipped.  It was priceless...great nurses and great daddies...you can't beat 'em!
Overall Dr. Shuler was very pleased with D's heart.  He said it sounded great with no added swishing other than what's normal for Derrick.  The EKG did show that he's still having a premature beat every so often, but his body tolerates it fine.  Just to clarify that a little for those who haven't spent countless hours listening to a heart-rate monitor, it would sound like this....
beep.....beep.....beep.....beep.....bee.beep.....beep.....beep.....beep
Does that make sense?  Anyway, we'll just keep watching it.  As long as his body continues to tolerate it and as long as it doesn't get worse, I guess that's just how he'll be.  We got the "see you in 3 months" again and that was it.  Painless.  Thank you Lord!  Whew!
Dr. Shuler said that Derrick was so good for all he's been through.  He said a lot of kids don't deal with doctors and nurses that well when they've been in and out of the hospital and had so much done to them.  That makes a mama's heart smile! :)  Little does he know, D hasn't been such an angel for Dr. Bonnett and all of his ear infection visits!  That's ok though, we'll take it!
After we left D's visit we headed down to Charleston to drop off a slew of BraveHEART Baskets!  They were getting low and we were happy to make a delivery.  (Not to mention I love any excuse to go to Charleston!!)  There is such a sweet nurse taking care of the delivery of the baskets and we are so thankful for her!  She said the kids were loving them!  She said that they come upstairs out of the PCICU feeling yucky from surgery and that the baskets were like Christmas for them!  We are so very thankful for all of the donations that are made to make the BHBs possible!
While we were at MUSC we also visited our friend Zach.  He's recovering from the Fontan (the 3rd surgery Derrick will have) and he is doing great!  He is so spunky!  It's absolutely amazing to see how quickly these kids recover from major open heart surgery.  I know I'd be lying in the bed moaning and groaning.  They're up laughing and playing...the heart of a child.  It's truly amazing!
Derrick is fifteen months old today.  I have an update in my head, but it's been a long day and it's late so his most recent happenings won't be up tonight.  Hopefully tomorrow!
Thanks so much for your prayers for Derrick's heart and for his visit today!  It may seem silly,  but we both get nervous when it's time for any visit where they're checking out his heart.  It's especially nerve-wrecking when it's been a while.  We appreciate the prayers so, so much.  This is a scary ride, but it makes it a little easier knowing that people are praying for our son.  We can never make you understand how much that means to us.  Thank you!