Tour of Homes: The Office

We've been working on our "new" house for a little while now, but the office is the closest to being finished, so I thought we'd share!


Here's the office two weeks ago when we moved in. 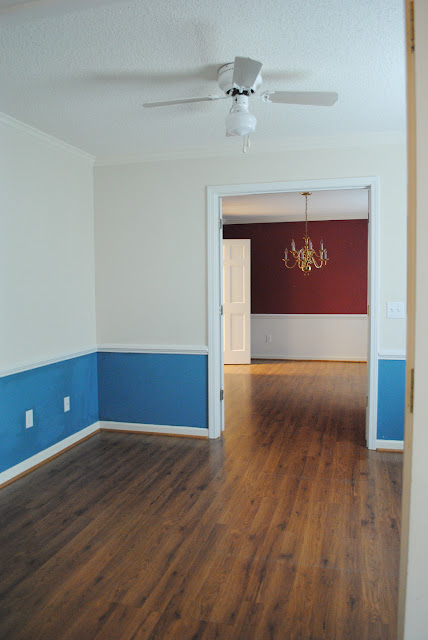 We think this room was originally a formal living room.  I've never had a "formal" living room in my life, so I wouldn't know what to do with one.  I'm not into fancying up a room that we won't use, so we decided to turn it into our office.
The office has to look nice because it's right beside the front door (with no door of it's own) so it's almost the first thing you see when you walk in the house.  The paint we chose was Guacamole by Olympic.  We had it mixed in their low VOC base and loved it!  It was so nice not to have the house filled with paint fumes! 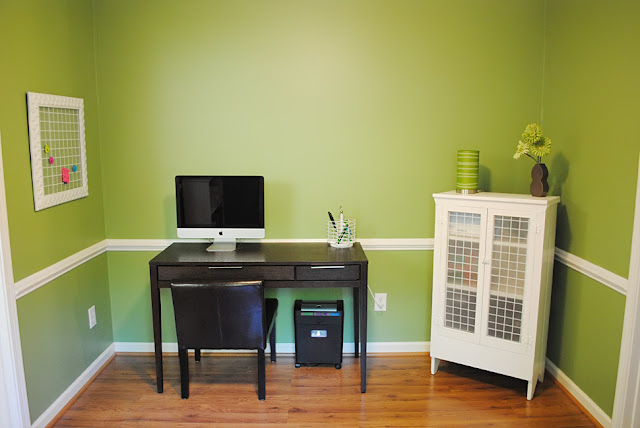 Of course we have our computer and desk in here, and we also brought in this cabinet.  It was Justin's great-grandmother's so we were excited about having a place to use it.  It's holding our printer and some other large things that aren't so pretty.  To try to hide some of the not-so-pretty supplies, we covered the glass doors with two $1.99 placemats from Target.  It has that frosted glass look going on now so it does a much better job at hiding things than it did. 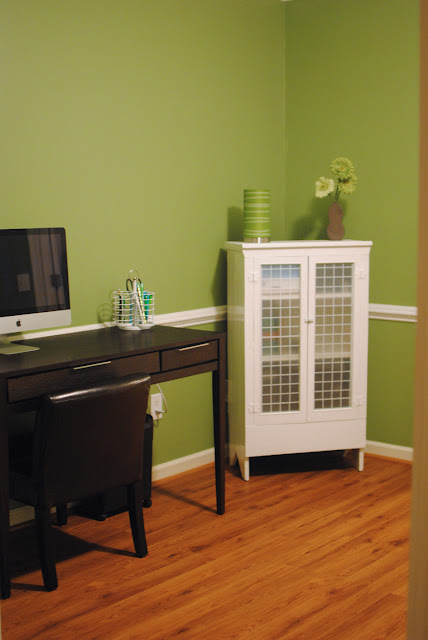 We're in need of some things on the walls in here.  Our plan is to put  some white floating shelves on the wall above the desk.  It's a little bare right now, but we'll get it completely finished eventually. 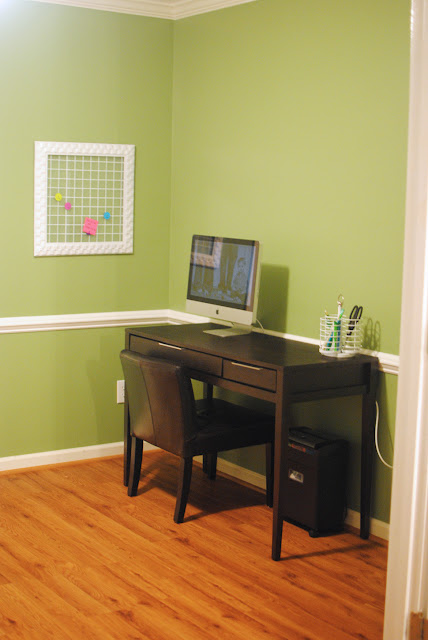 We made this message board from an old frame we had that we spray painted white.  We'll eventually put some magnetic paint on the glass, but this will work for now.  Behind the glass we put two more of those $1.99 placemats from Target for a little visual interest. 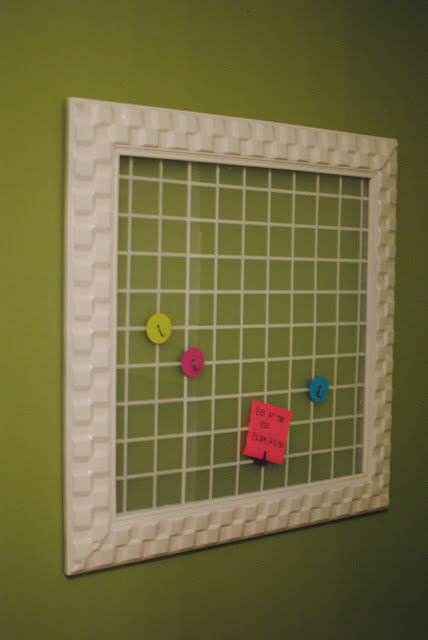 This bookshelf was recycled from our old living room and painted white.  The boxes and basket store all of the office necessities.   (Like thousands of sticky notes.  Yeah, it's a problem.  But I'm a teacher, so that makes it ok.  :) 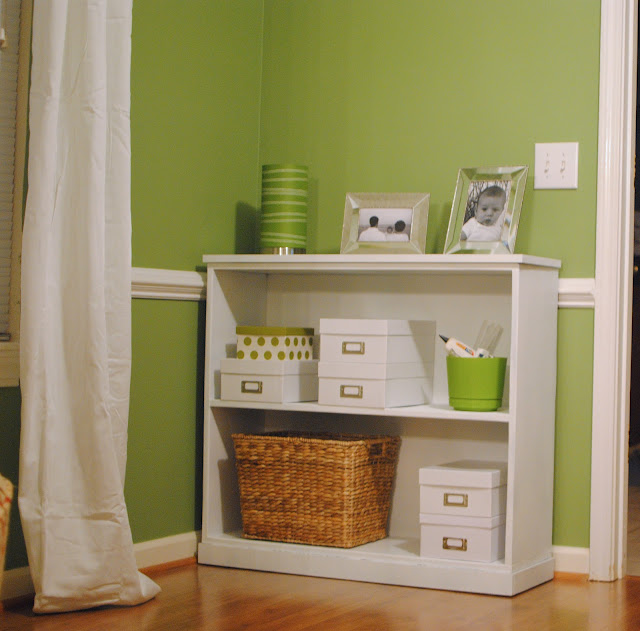 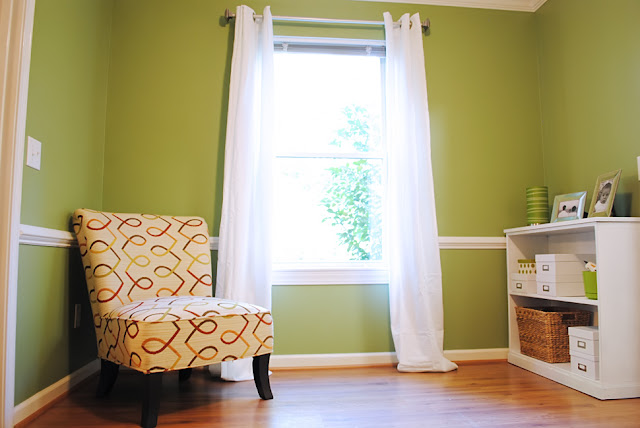 We hung long white curtains on the window and brought in the chair we had in the living room at our old house.  After about a day and a half the room is finished!  The first one in the house!  (Kind of a sore subject since the living room was pretty much finished until I decided that I didn't like the color.  Have I ever mentioned that I love my husband? ;)
Anyway, pretty much everything that we used in this room was something that we already had.   We bought curtains, paint, and spray paint.  Not bad, huh? 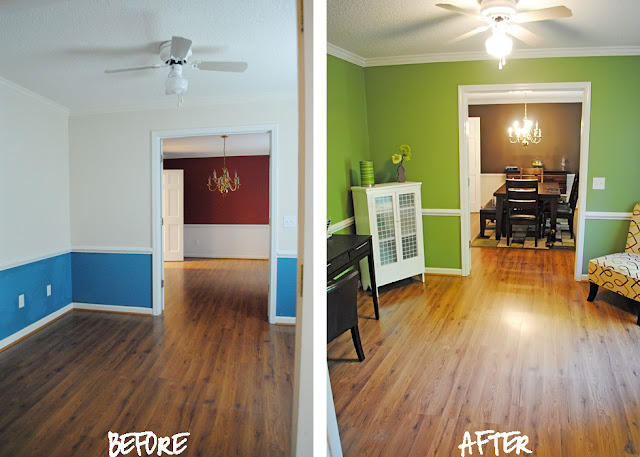 And because I know some of you are wondering what Derrick has been doing while we've been painting... 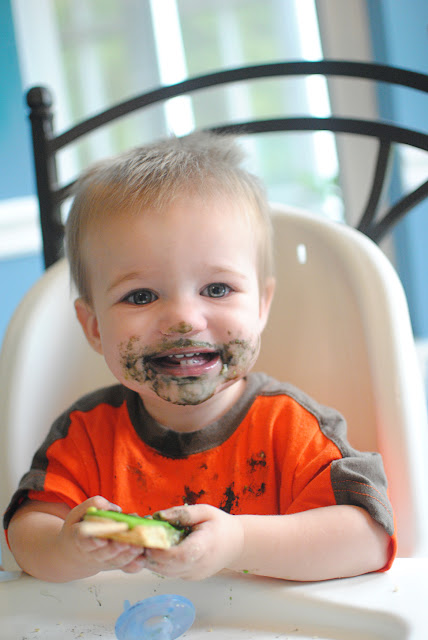 He's been practicing for Halloween.