We didn't plan on working on Derrick and Jenny Kate's bathroom yet. I mean, it was a terrible yellow, but it wasn't in the plans to update it. However, if you know us very well, we're "If You Give a Pig a Pancake" kind of people. Everything we do is a huge spiral, which often results in many projects started, not so many finished...
It started with Derrick's big boy room, which is thisclose to being finished. Then next door to Jenny Kate's room, which is also thisclose to being finished. We couldn't let the bathroom that attaches the two rooms be undone, so their bathroom project was born. The funny thing is, it's the ONLY room in the house that's finished. Yes, the one we weren't going to start is the only one complete. That's just how we roll. :)
So, without further adieu...
The bathroom before... 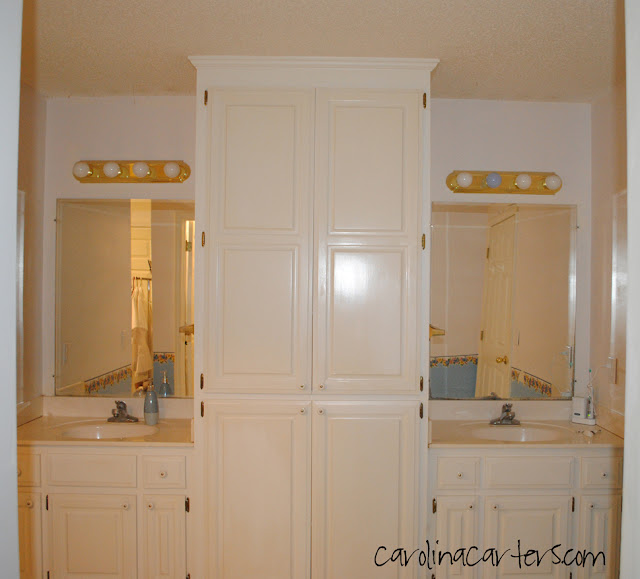 Sort of.  I have searched and searched for the pictures of their bathroom before.  I know I took some.  Sadly, I'm afraid that they are on the laptop that Derrick poured water in last week that no longer works.  (My three month old Macbook....and yes, I am very a little sad.)  Anyway, here's an idea of what the bathroom looked like before.  This picture is actually of our bathroom.  The layout is almost identical, just replace the lovely blue and white with boarder with a terrible yellow color.  A you-need-sunglasses-yellow color.  Trust me, you're not missing out on much by not seeing the yellow.  It was terribly difficult to photograph anyway.  It had the exact same light fixtures, mirrors, cabinet knobs and faucets.  This bathroom has enough space to scoot back enough to get the entire area in a photograph, unlike theirs.  That's pretty much the difference.

We kept some of his monkey stuff from his bathroom at our old house and the paint behind his mirror is the accent color in his bedroom.   We replaced the mirrors (from Ikea), light fixtures, door handles, and faucets (all from Lowe's), and the knobs on the cabinets (from Target).  The floor will go at some point, but it's not driving us crazy yet, so it'll stay for a while. 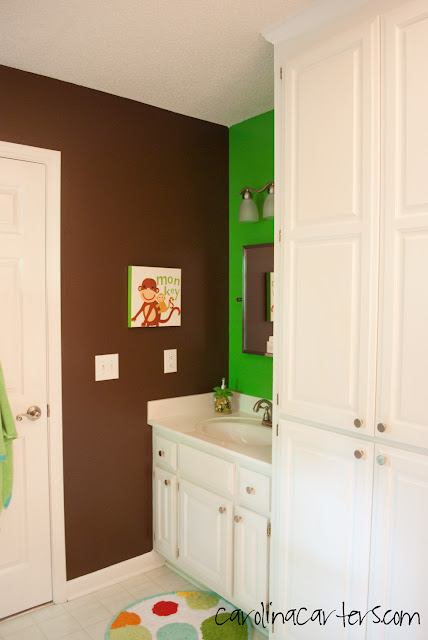 This is a Jack-and-Jill bath, so the doors lead directly into each of their bedrooms.  We added their names to the doors for fun. 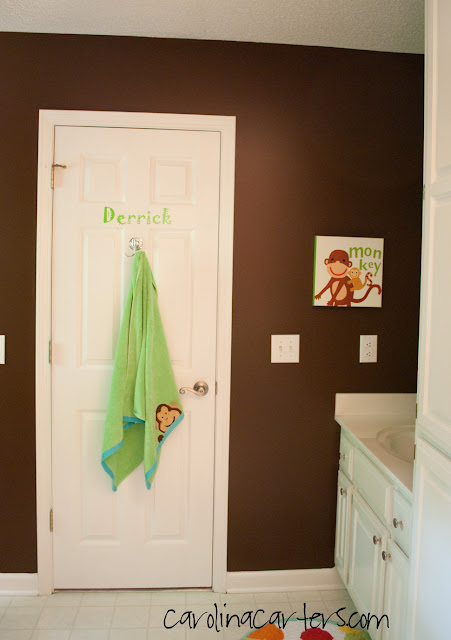 
The pink here is also the accent color in her room.  Her towel, toothbrush holder and soap dispenser all came from Target.  The painting on the wall is homemade.  Not sure if it will stay but it works for now.  I wish I would have put some blue in it.  It was one of those midnight projects so I guess I wasn't thinking clearly! 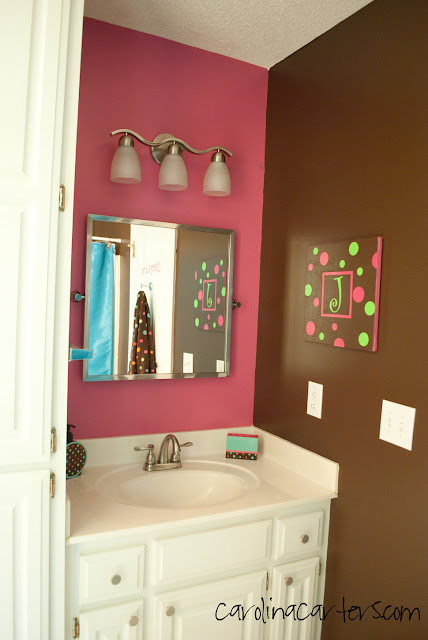 And the door to her bedroom.  Her rug (from Marshalls' clearance section) was the inspiration for the whole bathroom. 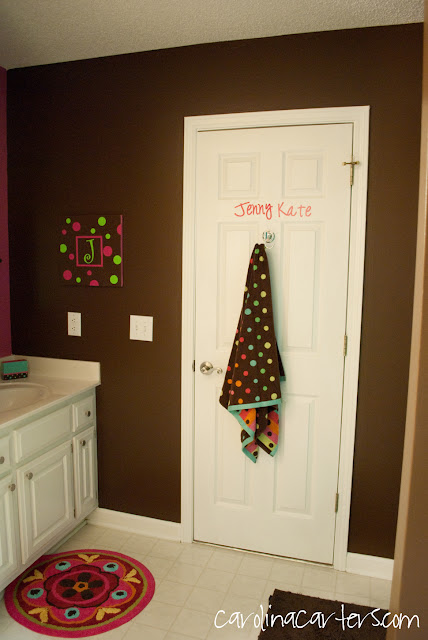 I know, a picture of the toilet.  But I wish I could find a picture of this from before.  We added trim around the window and it looks a thousand times better!  Not a single window in our house had trim and it drives us crazy!  We're slowly adding it to all of the windows.  It's so much cleaner looking.  We happened to find this curtain on clearance at Bed Bath & Beyond and the colors were perfect.  A little girly?  Yes, but that's the way it goes.  Justin says D might as well get used to it! Ha! 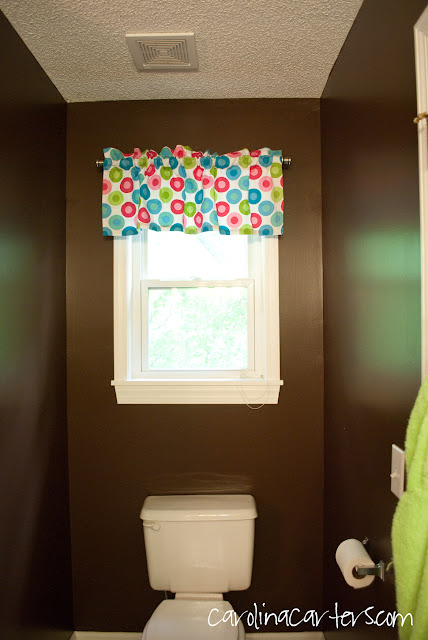 And the bathtub.  We used the monkey shower hooks from D's old bathroom (which obviously keep popping off, sorry!) and went with a plain shower curtain.  We looked and looked and this is the best we could come up with.  I'm not sure if it will stay or not but it will have to do for now.  The color is perfect, and at $4 from Ikea, it'll work until we come across something better. 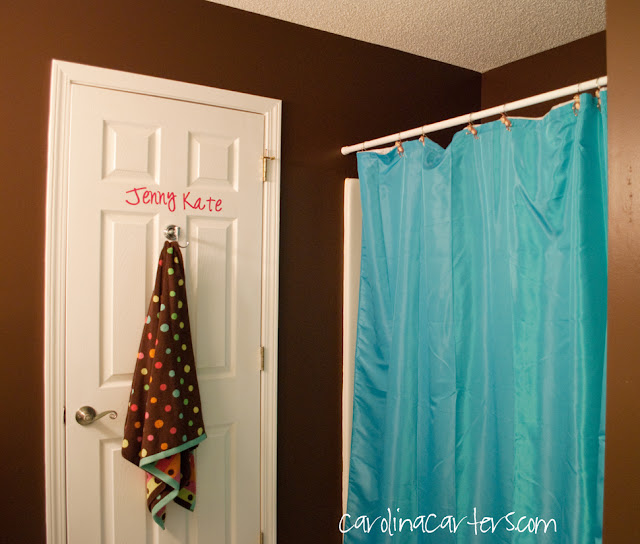 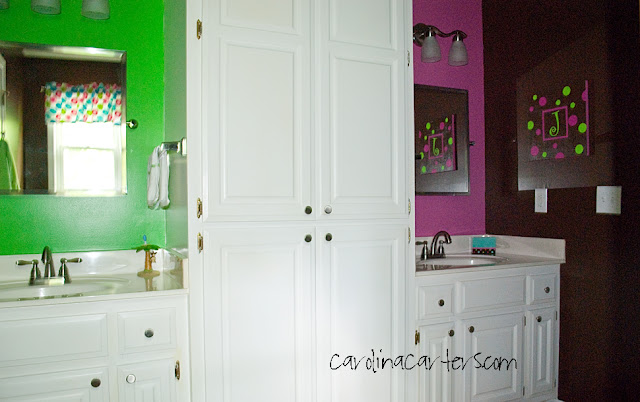 So that's it.  The only truly finished room in the whole house (minus flooring which has to be done EVERYWHERE).  We love it.  It's fun and it's FINISHED (which increases it's fun-ness!)!

I'm linking up to