*I had this written once, but blogger has been down.  Sorry for those who have been waiting to hear how D's appointment went!
We went to see D's cardiologist Wednesday.  I don't know why, but these appointments never get any easier for me.  You'd think after two years of doing this that I wouldn't dread the drive to that office so much, but there are always so many uncertainties that can be hidden in that tiny little heart.  I know it's just me being overly paranoid, but sometimes I just can't help it.  I'm a mom, what can I say?
So anyway, Tuesday night I tried to talk to Derrick about what they were going to do at Dr. S's office so he wouldn't freak out.  (Those monthly synagis shots really ruined doctor visits for us!)  He woke up Wednesday morning talking about going to see Dr. S and that he would listen to his heart and that Ms. Helen would check his numbers (his O2 sats).  I love it when he wakes up talking about the last things we talked about before bed.  It's so funny, like he's been thinking about them all night.  Ha.

First up we got some BIG NEWS! 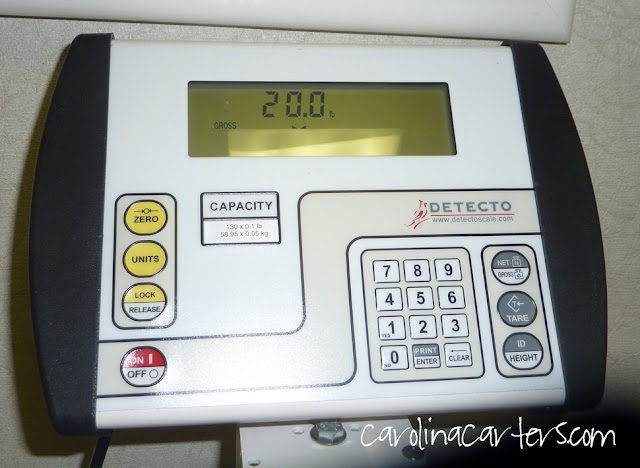 Y'all, we have been waiting to see this number for one entire year!  (He did have on a wet diaper, so it may not be totally accurate, but who's counting, right? :) 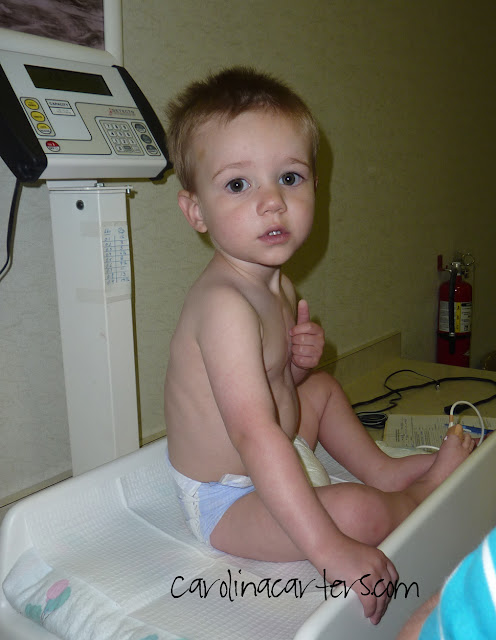 D wasn't quite as thrilled.  We still can't convince him of the importance of calories!
He didn't have an echo (like I told him he would) but he did have an EKG (that I didn't tell him about).  D didn't mind the EKG because he likes stickers.  And he knew he was getting a sucker so he really didn't care what happened.  He really is such a big boy sometimes! 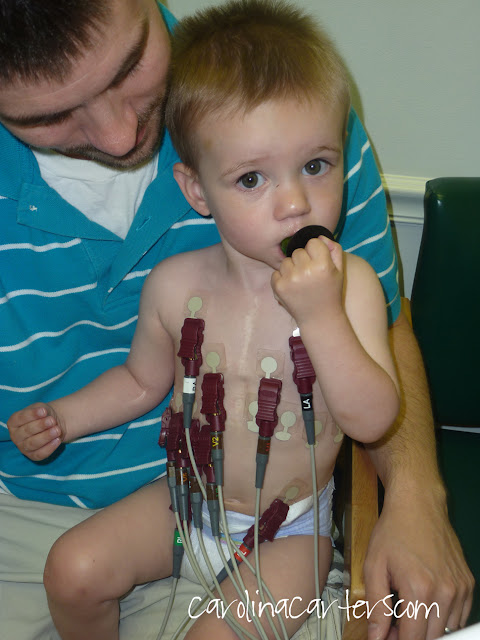 Dr. S said that everything looked and sounded good and that he wants to see him again in three months!  He'll have an echo at that visit and we'll go from there.  Hopefully surgery is still in the very distant future.  And until we hear otherwise, we're gonna live it up!
We stopped by the mall on the way home so Derrick could make a gift to take to Jenny Kate in the hospital.  We picked out two different animals at Build-A-Bear for D to choose from: one I wanted him to make (a cute bunny), and the one we figured he'd pick.  Of course he picked the one I didn't...a tye-dye bear!  Don't get me wrong, I love tye-dye, but this boy LOVES tye-dyed things! (He has a tye-dye shirt that he wants to wear every. single. day.  but that's a whole post in itself!) 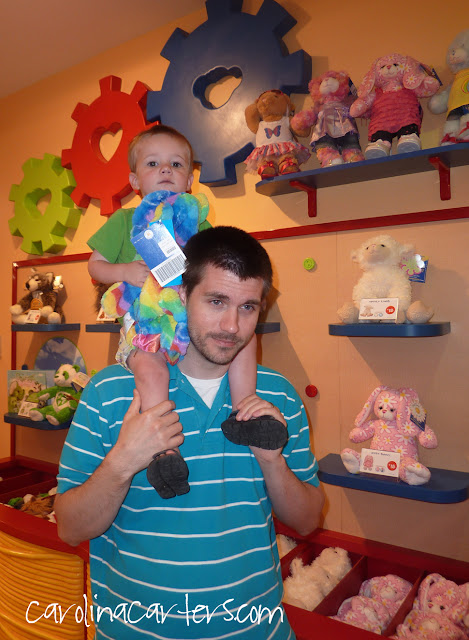 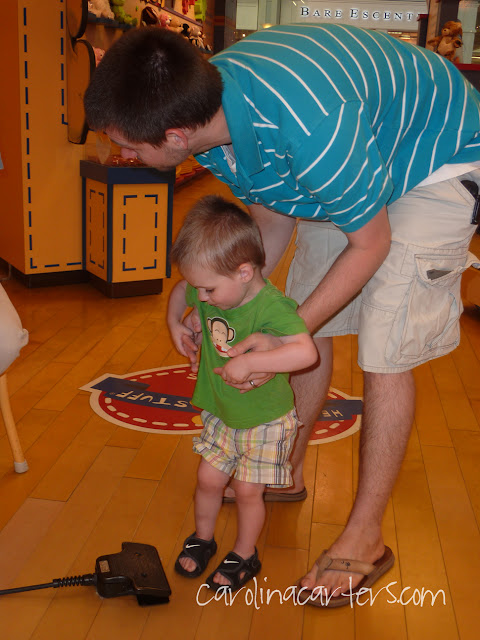 picked out the perfect heart for her, 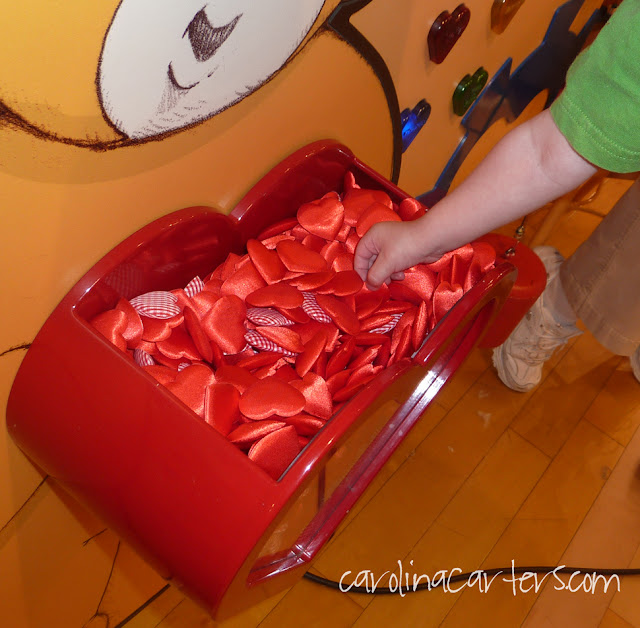 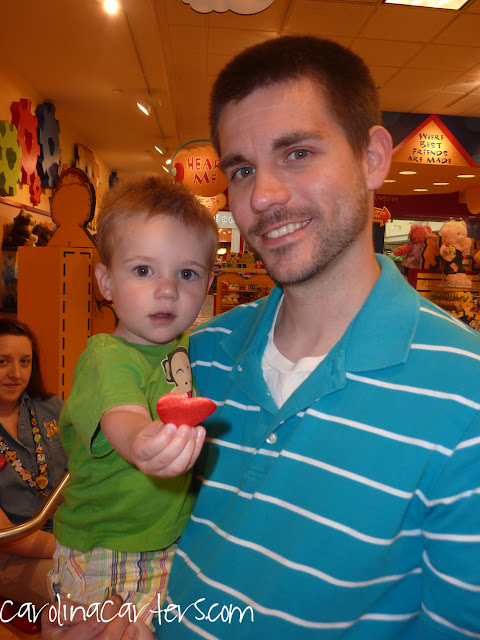 and tucked it safely inside. 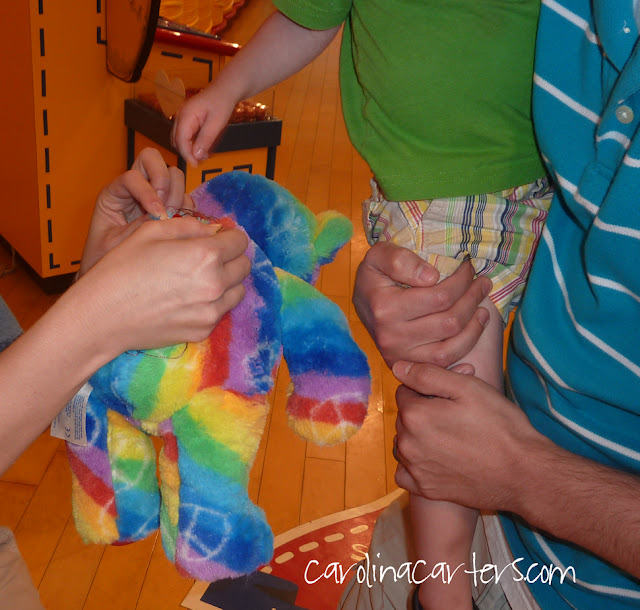 We gave the bear a bath, 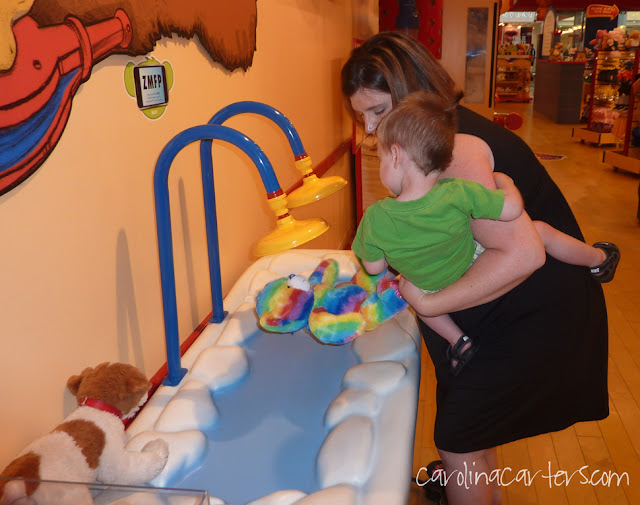 and went shopping for a new outfit for her. 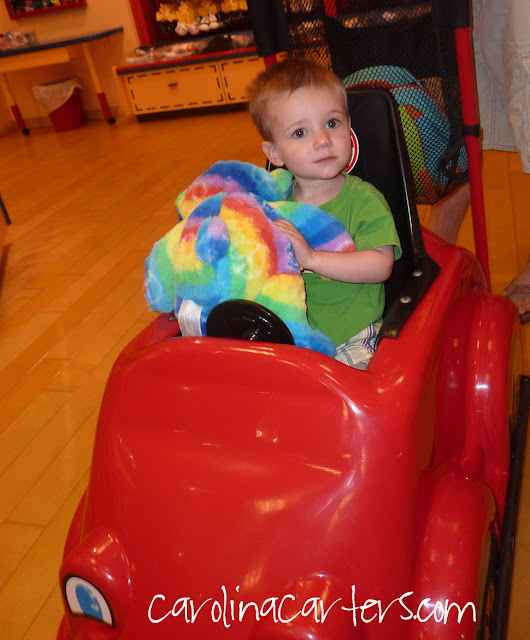 D made the decisions for her clothing and hair accessories.  I think he did a pretty good job, don't you?  She's adorable, colorful, and perfect for our girl...made with love from her big brother!    And if you press her hand you can hear Jenny Kate's 20 week heart beat.  I love it! 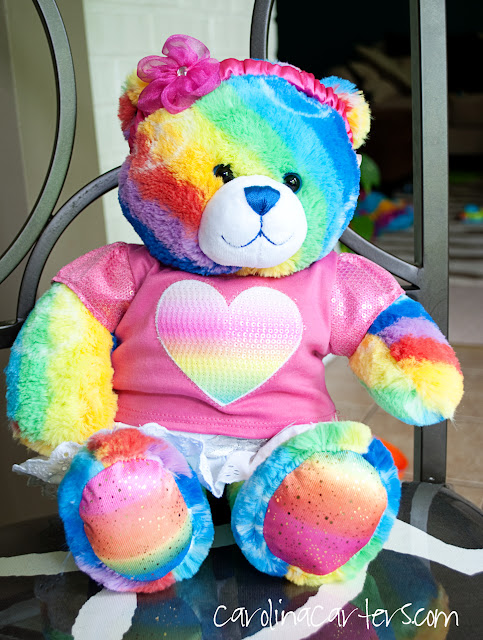 (If you look closely in the background, there's D's tye-dyed blanket on the floor!  I'm telling you...)


D picked up some new shades for himself and we were ready to call it a day!  This boy was worn out!  I'm hoping Jenny Kate is a better shopper than these boys are! Ha! 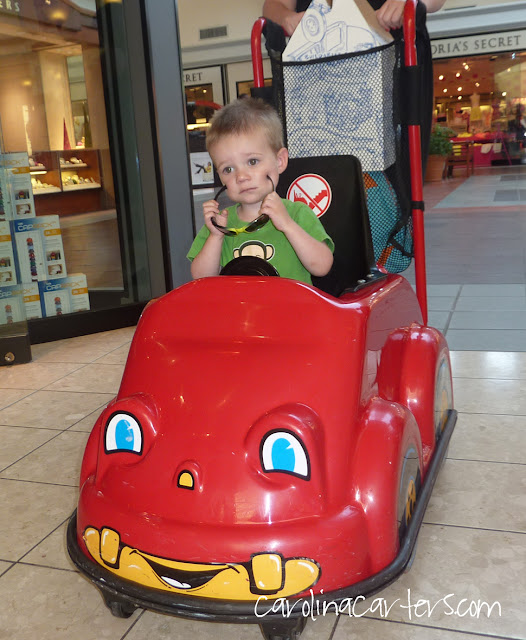 Thanks so much for your prayers for Derrick.  I know I always say this, but they mean more to us that we could ever express!
And a little side note about Jenny Kate....
I never posted this, but as of two weeks ago (and according to an ultrasound) she weighed 7 lbs 9 oz.  I know they're not super accurate with the weight predictions but the tech said they're usually within a pound and usually on the high side.   As of yesterday I'm 2 cm dilated and "moving right along."  We're hoping this girl comes on her own and in my opinion, the sooner the better!  I'm looking forward to getting three solid hours of sleep at night because right now, that's NOT happening!  ;)  T-10 days and counting!