As of 12pm today I had an official job title change.

I'm so, super duper excited! :)  I'm sure it will only take a few days for Derrick to ask when he's going to Ms. Carol's though.  I think he gets tired of me after too many days in a row.  Ha!
My students gave me a shower today, which was totally unexpected and very sweet.  Adult Ed is a whole different world from the regular classroom.  It's different (and somewhat unpredictable) every day.  It's a little more difficult to build the same types of relationships in an AE classroom that you have in a traditional classroom.  Kids give feedback...even when you don't ask for it.  :)  They draw pictures, bring gifts (sometimes interesting ones :), give hugs, yell and throw things, whatever...but they usually let you know how they feel about you.  Adults, however, not as much.  So today was extra special that they went that extra mile to let me know that I'll be missed.  And they'll definitely be missed too.

But I have to admit, I'm so very excited to be able to see this little face every single morning... 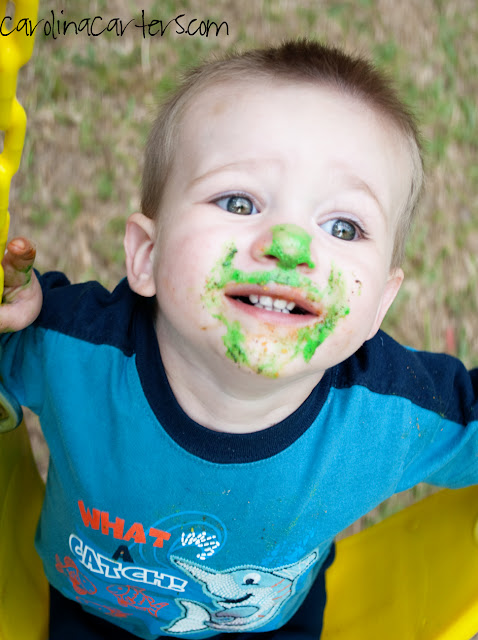 (even though it is a little messy! :)
and excited to be able to spend the days with my babies.  (Wow, that sounds crazy!)  I've learned over the past two years just how quickly time flies.  It seems like just a few weeks ago I was saying goodbye to my fifth graders and preparing for D's birth.  Now we're preparing for his SISTER and he's already TWO years old!  I don't want to miss another second.  It's totally worth the sacrifices that will have to be made and the sometimes long days ahead being home alone with two small children.  I know before I blink twice that we'll be sending D off to kindergarten, so I need the days to last as long as possible...because I'm nowhere near ready for that!!