Back in March, when we went to the Great Wolf Lodge, I had a little reality check.  We were so excited to take Derrick to an indoor water park where the temperature was regulated at a toasty 84 degrees.  Derrick LOVES the water.  The problem is, other than at bath time, the water is usually too cold for our very slim, less-than-perfect-circulation little guy.
Derrick loved playing in the water, but after only a few minutes our little blueberry would be shivering and asking for a "towvel" because he was too cold.  I must admit that after wrapping him up over and over I couldn't help but look around at all the kids laughing and squealing and enjoying the water so much and not have a pang of jealousy...a little pity, and a lot of heartbreak.  I stood there holding D in his wet towel and had to hide my head because I couldn't stop the tears.  It wasn't fair that he couldn't even enjoy an indoor water park!
There are many things that we are well aware of that Derrick will not be able to do.  He won't be able to play football, run cross country (most likely), or play seriously competitive sports.  His heart won't let him.  We've known all of these things from the very first day we found out the details of his heart before he was born, and we can deal with that.
No one ever told us about the difficulty he would have with regulating his body temperature.  A large part of that is probably due to his lack of body fat, but I'm sure some of it is because he has a much lower oxygen saturation than the "normal" person.  My boy LOVES the water.  We will have to tell him "no" to so many things, but to swimming too?  The one thing he really, really loves?  No way!
The first night we were at the Great Wolf we went out on a search.  Justin was determined that we could find a solution to the problem.  We searched every store that sold swimming or surfing gear and found nothing that would work for a 20lb kid.  One guy working in one of the stores, who was a surfer, tried so hard to help us.  We typically don't go around telling everyone all the details of Derrick and his heart unless it comes up for some reason because we don't want anyone feeling sorry for him.  He wanted to know why we were looking for a wetsuit for him (because we obviously don't fit the surfer "stereotype"), so we told him about D's heart.  You could see the pain in his eyes for our little D who loves the water so much, because this guy loved it too.  He gave us a lot of great ideas about how to get a suit for D and what to look for, and the search began.
As soon as we got home Justin got online and found a few options.  Not many of them were exactly what we were looking for (and we now had a lot of knowledge from the surfer guy we met), but there was one definite winner. 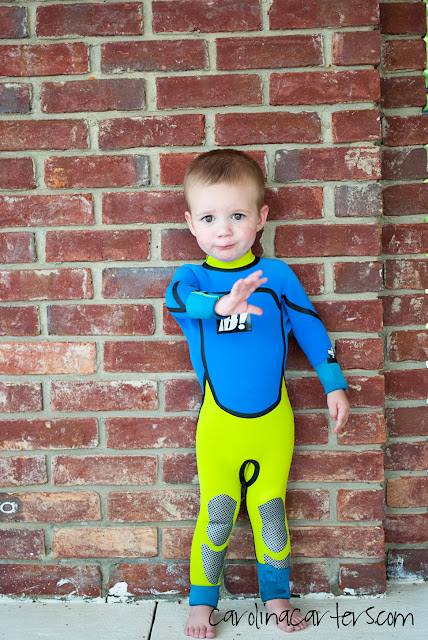 Is this not the most adorable little wetsuit you've ever seen?! 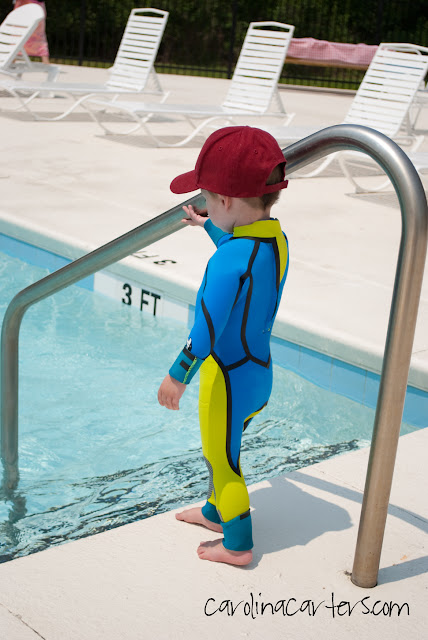 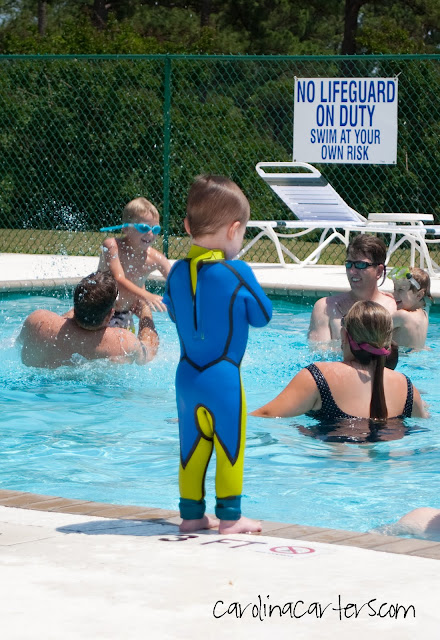 It came from Buell Wetsuits and it is AWESOME!  Seriously, it has saved our summer! :)  In his wetsuit he doesn't get blue and shivery.  He doesn't ask to get out of the water...he gets ANGRY when he has to get out!  And it's super bright so you can spot him from anywhere.  It is perfection! 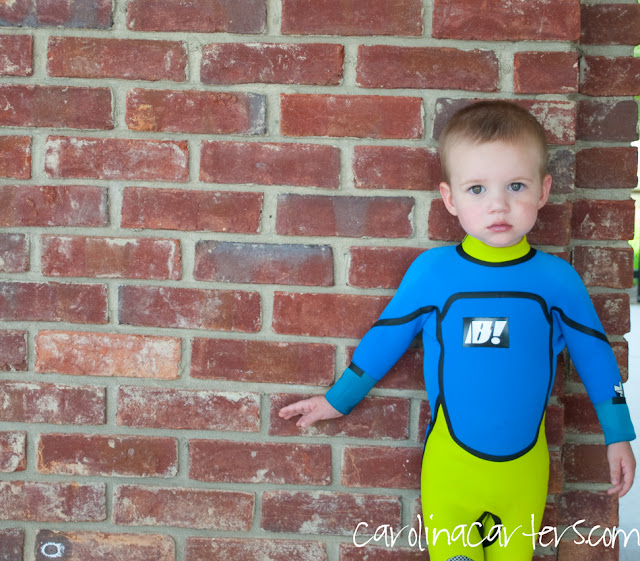 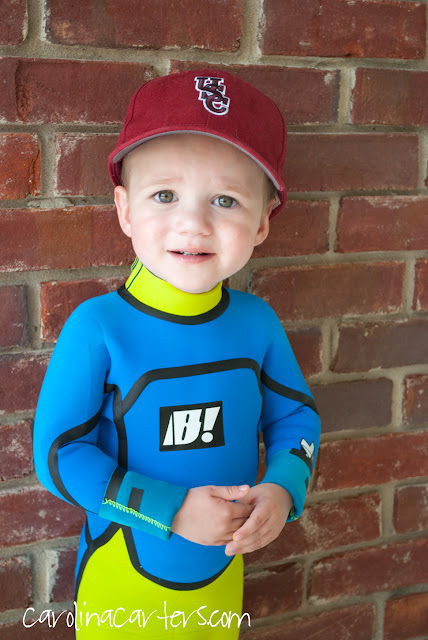