Sometimes, I believe, God gives us gentle pushes to do things that we need to do.  We may not know it at the time, but looking back we can see that those unexplainable urges were most likely little pushes from Him so that we didn't miss out on something important.
When we were driving down to the beach last month, Justin and I were talking about how we needed to go visit Nana.  We had both been thinking about it for several weeks but hadn't said anything to the other until then, so we decided we'd go up to Tennessee the next Sunday night after Justin got off work. 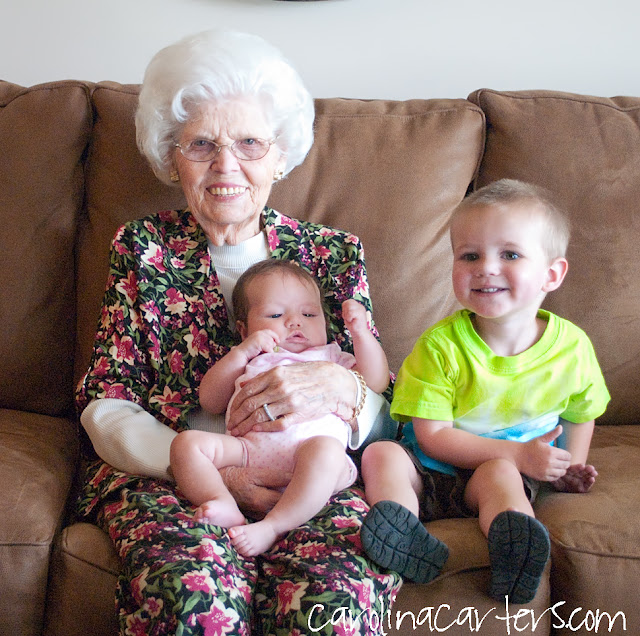 We arrived sometime after midnight that next Sunday night, chatted with Nana, Aunt Shirley and Uncle Gary, and made plans to spend our Monday and Tuesday doing absolutely nothing other than spending time together.  We had a relaxing two days just hanging out {and eating, because you can't leave Nana's without gaining at least four pounds, no matter how short of a time you're there! :)}.  We helped Nana do a few chores, and I'm sure Justin reset her clock, which is something he's done every time we've ever visited Nana for as long as I've been around.
Once we arrived home, we called to check in, telling them that we'd arrived home safely.  We both had an unsettling urge to speak to Nana before we hung up the phone.  We each spoke to her, told her we loved her, and hung up.
Four days later, we received a call that Nana had a catastrophic stroke.
We loaded up the kids and drove to TN that night.  We visited her in the hospital, where she was barely able to whisper and unable to open her eyes.  When it was time for us to come back home we were telling her good-bye and that we loved her, and before we walked away she whispered, "I love your babies too."
Later that week Nana was taken home where she could be comfortable and taken care of by her family.  We drove back to TN, anxious to be able to see her again.  When we got there she was much more responsive than the days before.  She opened her eyes and reached out her hand to us.  When we brought the kids in to see her she perked up and kept rubbing and patting their arms and legs.  She was so happy to see them.  She couldn't show it in the real Nana way, but we could tell how much she loved seeing them.  We spent the next day and a half with her, soaking in every second we had with her.
This past weekend we went to see Nana again, only this time it was to say our final earthly good-byes.  She had a beautiful service that celebrated her life.  The line to see her was long and the church was packed.  This came at no surprise because everyone who met Nana loved her.  She was "Nana" to every person who didn't call her "mom."
Nana was an incredibly Godly woman.  She was a wonderful example of how I would like to be.  She spent time in the Word every single day, but not only did she read it, she lived it.  She was patient, she was giving, and most of all, she was loving.
She was also the definition of a southern lady.  She kept her company well fed.  She always had a freshly baked cake waiting if she knew someone was coming and was embarrassed if someone showed up without her knowing and she hadn't had time to bake that cake.  She rarely came out of her room without being fully dressed including lipstick and jewelry and would never even think about walking out the front door not fully made up.  She kept a spotless house and a full fridge.  She was the "card queen," never missing a holiday and often sending them "just because."  She never raised her voice, never said anything rude, and never lost her patience.  She was full of smiles and liked to giggle.  And if you got her alone she had a little wild side to her...a ladylike wild side, of course.
She made famous fried pies and the world's best red velvet cake with throw-up icing.  Everyone fought over the corners of the red velvet cake, so she made an extra bowl of throw-up icing so that we could all have corners.  She never sat down at the table until every person had everything they could have possibly wanted; only then would she stop to eat.  She had a funny little squeal that always made us laugh.  She was appalled that Justin would try to wear his pajama pants to take her to Walgreens at 10pm.  I'm not sure she ever let him get away with that, although he tried quite a few times.
She loved her grandchildren.  She loved, loved, loved her great-grandchildren.  All eight of them.
She loved her husband and missed him terribly in the years she lived without him.  They had an incredible relationship, one like Justin and I pray we can have.  I never had the privilege of meeting him, but the stories are real-life fairy tales.    And they're really real-life.
There's an impressive stack of paper in Nana's room that contains every word and every picture that has been posted to carolinacarters.com.  This is probably the first post that ever hit this blog that she doesn't have in print.
I am beyond thankful that God gave us that little nudge to drive up and visit Nana the days before her stroke.  There's not a doubt in my mind that that's what it was.  He was giving us that last chance to spend special time with her.  To let her hold and play with her youngest great-grandson and only great-granddaughter one more time.  To let her tell us in several different subtle ways that she was ready to go Home when it was time.  To give her grandson a special peace to make it just a tiny bit ok to have to say goodbye to such a special lady that has an enormous piece of his heart.
We love you Nana.