And Now We Know

Monday morning I called Jenny Kate's pediatrician to let them know that the hospital said her cultures all came back negative so they could get the ball rolling on the GI referral. They called a few hours later to tell us that they had just gotten off the phone with the hospital and that they were cancelling the GI referral.  Jenny Kate has SALMONELLA!
Wow.  First of all, I have no idea how she got that.  Gross.  Makes me feel terrible.  I hung up the phone with the nurse and immediately bleached the kitchen, rewashed all of her bottles, and they are now stored in a cabinet as far away from the sink as possible.
Second of all, Justin spoke with the "Chief Resident" on Sunday and he told him that everything came back negative.  Although he also told Justin to "just give her some Mylicon."  No lie.  Apparently the cause for crazy amounts of diarrhea, sometimes bloody, is GAS.  Hmmmm.   We probably shouldn't have believed him anyway.
So there's nothing you do for salmonella in a child Jenny Kate's age.  Her cultures have been sent to the state department to determine the 'type' of salmonella she has, which I'm assuming will help us figure out where it could have come from.  Justin is convinced that it's from our pumpkin.  The way the pumpkin patch was laid out, there were farm animals above the pumpkin patch, and salmonella can come from farm animals, not just raw chicken and eggs.  We took pictures of Jenny Kate with the pumpkin and it never even crossed my mind to wash the thing.  For some reason when it comes straight out of the garden it feels clean to me.  At least until we're ready to eat it. Dumb, maybe.  I'll now have a new paranoia to add to the list.  Bringing produce into my house without scrubbing it first.  Remember the cantaloupe outbreak a little while back!
Anyway, it could have come from anywhere.  Someone touching her, her grabbing something (which she does ALL the time), anywhere.  It kills me to think it came from our kitchen.  Honestly, I can't even remember the last time I cooked chicken!   I feel terribly guilty that that's a possibility for what's caused her all of this pain.  I'd like to blame the pumpkin, but who knows.
On a much lighter note, she is feeling MUCH better.  She's been laughing and smiling and flapping those chunky little arms around like the old Jenny Kate.  We're so, so glad she's feeling better.  She's had a lot less yucky diapers and her diaper rash is finally having a chance to clear up.  Whew!
Thanks for praying for our girl!  I'm going to finish bleaching, just in case and then we're starting paci boot camp.  I've got to convince her that her fingers are NOT the way to go!
Of course I'm behind on posting all of the fun fall things we've done lately, so they're coming.  Y'all didn't think I'd actually be on time, did you? :)  Here's a sneak peek of our little baker and cupcake at trunk-or-treat Sunday.  Derrick refused to let me take his picture (and he's missing part of his costume) so better ones are coming soon.  This was the best I could get in the dark with him running away from me. 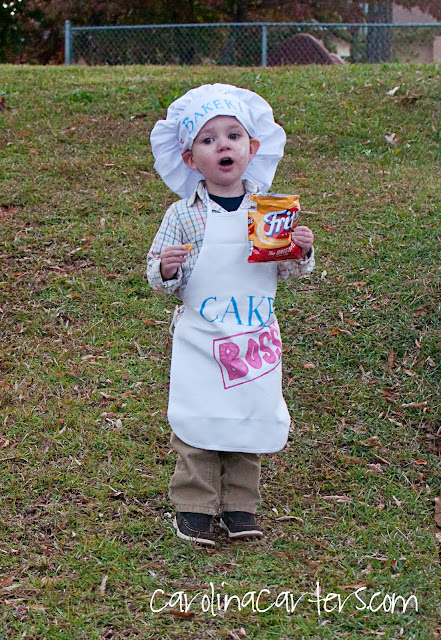