Wow!  It's been two weeks since I've posted on our blog.  We're all doing well, just busy.  Here's a purge of random things that have been going on around here.
Jenny Kate's physical therapy has has decreased to once every two weeks!!  That's an AMAZING thing considering we used to go twice a week, now we are going twice a month! 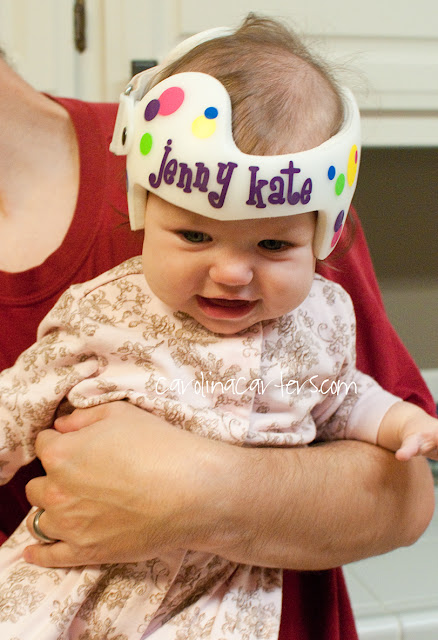 We have a tentative date of JK losing the DOC Band for next Wednesday!  Whoo hoo!!  She's almost outgrown the band and it has made significant changes in her head shape so we should be released from our once a week trips to Charlotte as of next week.  Oh, how awesome it will be to be finished with all (or at least some) of these appointments! :)
I earned my 4,238th nomination for mom of the year this weekend when I failed to bring SHOES for my 2 1/2 year old on our trip to Tennessee.  Really.  We took a two night  trip away and Derrick had no shoes.  Mom of the Year.

Minnie Mouse visits our house frequently.  If you do not hold the door open for her or include her in your plans, Derrick will get very upset with you.  She is his best friend and she leaves the Club House to come to Derrick's house on a regular basis.
Justin's mom gave Derrick a pot holder that has Minnie Mouse on it.  (I have no idea why! :)  He carried that pot holder everywhere and was proudly declaring that it was his "best friend."  Thankfully we can now just take Minnie along with us without having the pot holder version of her.  That one was a little more difficult to explain to other people.
We found out the 'type' of salmonella that plagued Jenny Kate.  I don't remember how to spell it and I don't see the paper I wrote it on right in front of me, but when I looked it up on the CDC's website, it was a type that typically came from water frogs and aquariums.  Blows my mind.  We don't have an aquarium and I can assure you that JK hasn't been outside playing with frogs, so I have no idea where that came from.  I was very happy that it wasn't from raw chicken or eggs because that would have made me feel way more guilty since it could have come from our kitchen.  I sure can't explain the water frog/aquarium thing though.

Our insurance company has decided that they don't want to cover Jenny Kate's hospital stay because it wasn't "necessary."  The letter we received said "The five month old was admitted to receive Nutramigen formula and diagnostic testing."  Seriously!  Doesn't it sound like she was admitted to the hospital so she could get some formula?!  Ha!  I assured the insurance company that I would much rather spend $25 on a can of formula than over $3,000 for a night in the hospital just to get those little 2 oz bottles of Nutramigen.  So far they aren't giving in to little old me, so I guess we'll fight them for a while.  Ugh!  I'm super thankful for insurance, but all of the petty stuff is insane.  We'll get it straightened out, but not without a fight, I'm sure.
I've done several photo shoots lately and am loving it!  I love being home with my babies but having something that makes me leave home every once in a while is nice too.  I can do it when it works for our family and I love it.  Couldn't ask for anything better right now.
I've been taking a sewing class at church for the past several weeks.  I'm kinda bummed that tonight is the last night.  We've been working on an apron that was supposed to take 2 weeks and it's taken about five.  Ha!  It's lots of fun and I can't wait to sit down and make something I really want to make.  I still don't really have a clue how to read a pattern but they make seam rippers for a reason, right?!  :) 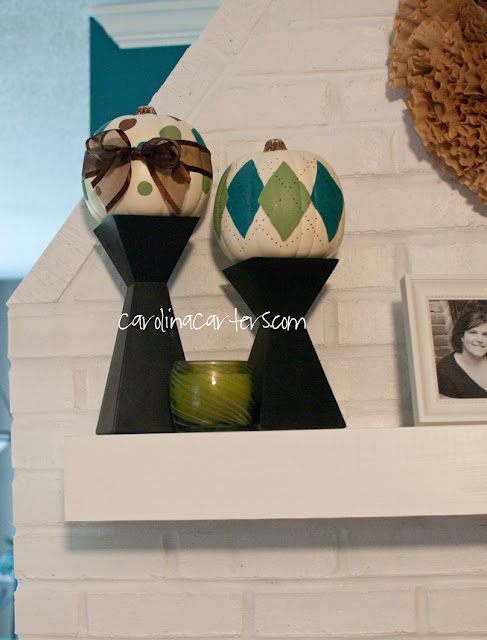 I've had a few craft sessions with some friends lately and have a new coffee filter wreath and some painted pumpkins.  I never got around to painting the big one and never got around to taking a picture of the wreath either.  You can see a little bit of it in the corner of the picture.  (Both of these ideas came from Pinterest.  Is anyone else as hooked as I am!?)  It's almost time to pull out the Christmas decorations, so I'm really excited about that!  We have a rule in our house that we can't decorate for Christmas until after Thanksgiving, so once Thanksgiving dinner has settled in our bellies, out come the trees!  I'm so excited!


And Justin...let's see...he's been working hard.  We keep him pretty busy on his days off so he's probably glad to have work to go to so he can have a little rest.  Ha!  He played in a basket ball game at church, the guys in our Sunday School class vs. the senior youth boys.  It was entertaining!  Our guys won but I think they all realized that they're getting old!  Justin did, anyway! :) 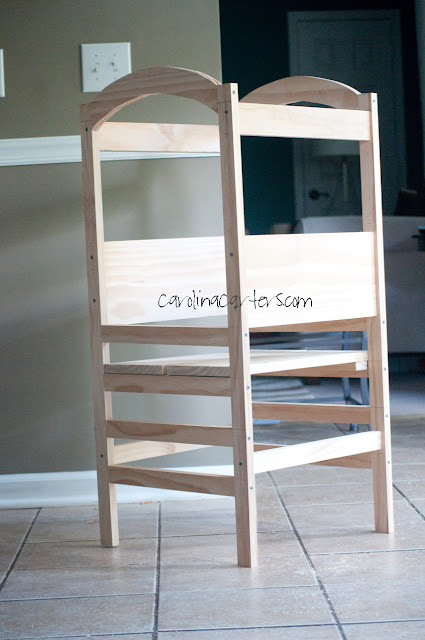 He also made Derrick a Kitchen Helper!  I've been eying one of these for a long time and was almost ready to take the plunge and order one when I came across plans to make your own!  (Ana White, the brains behind all of these plans, is awesome!!)  Derrick absolutely loves it and it only cost us $50 to make vs. $130 to buy!

We've been decluttering and have an enormous pile of boxes in our garage that are being taken to the thrift store.  It's driving us both crazy that we've been living in our house for a year now and things still aren't all unpacked and everything doesn't have a home.  It's time to get busy!
That's probably enough randomness for now.  I have so many things that I need to record on here, so expect some serious photo overloads soon.  It's my goal to catch up on everything I need to record here and get our computer cleared of the 30,000+ pictures by the end of the year.  I better get busy!
I think decluttering and getting organized will be my New Year's Resolution.  But I've never been successful at the New Year's Resolution thing...have you?