We had a really fun, but very busy Christmas this year!  Christmas Eve morning we headed over to Justin's parents' house.
I made these little santa hat brownies.  I didn't think these up, the idea came from here, and hers were much, much cuter.  But I was in a hurry and had to let the type-a-ness go and just go with it.  Brownies cut in a little circle (which isn't so easy using a shot glass as a cookie cutter since I didn't have a little circle cutter), top it with some cream cheese icing and stick a strawberry on top.  They may not look pretty but boy did they taste good! 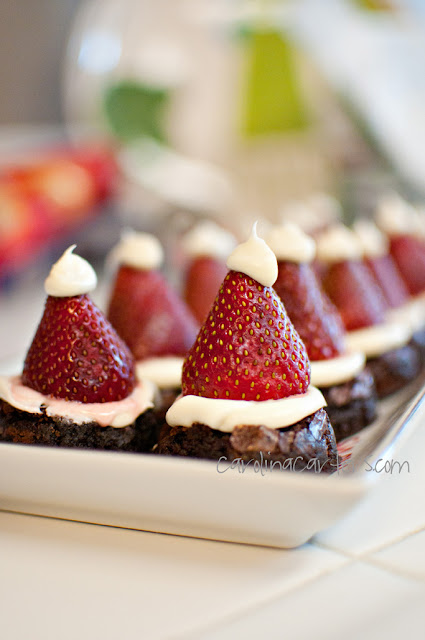 Once we got to Mamaw and Papaw's, Jenny Kate dove right in.  She was pretty excited about her first Christmas!  There was no keeping this girl away from the tree. 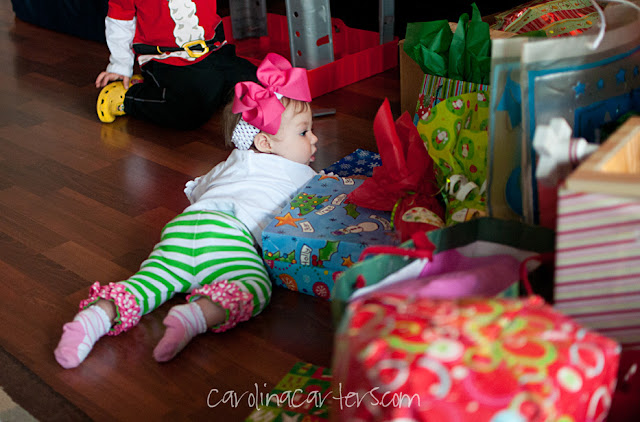 We had fun playing with this crazy hat.  It weighed about ten pounds and wouldn't sit on D's head straight.  Ha!  Don't let his sad little face fool you; he had fun with it!  He's just so silly in front of the camera these days. It was nice out so we were able to hang out outside while Papaw grilled steaks for lunch.  JK enjoyed her lovin' from Aunt Danielle. 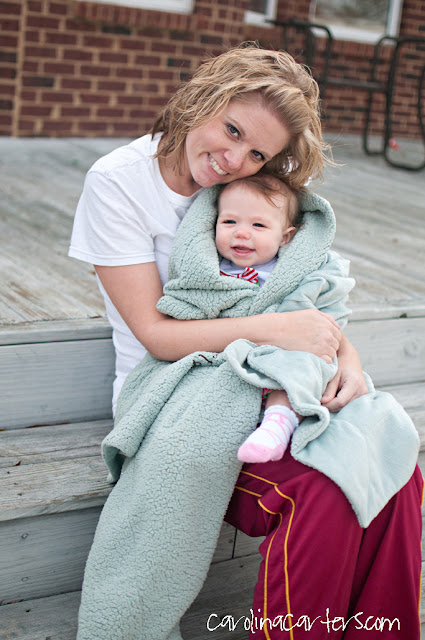 The boys played and played. 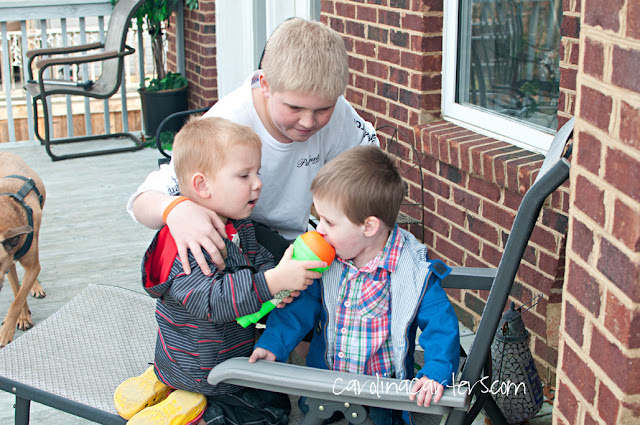 And they had fun on their make-shift slide! 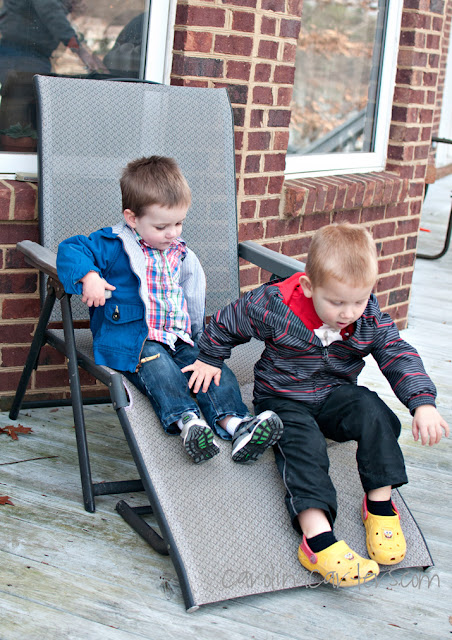 Silly Carter!  He and Derrick play so well together! 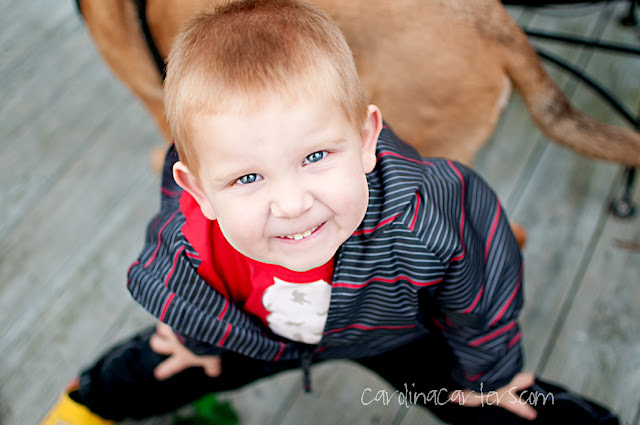 Derrick really had fun this year with Christmas!  He "gets it" now.   We made sure he understood WHY we celebrate Christmas.  We talked over and over about Jesus' birth and why Christmas is special because we definitely want him to know the REAL reason for Christmas.  I asked him on Christmas Eve who's birthday was tomorrow and he said, "Jesus!"  Then he cocked his little head to the side, wrinkled his eyebrows and said, "Mommy,  is it Santa's birthday tomorrow too?"  Ha!   I have to admit, having that *magic* and excitement back at Christmas time sure is a lot of fun! 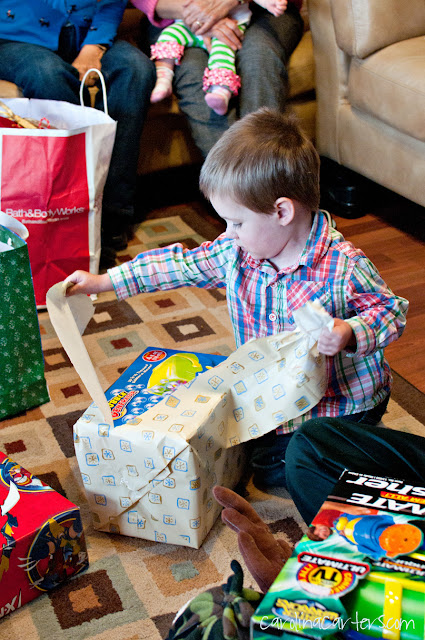 He got a real "picture" from Mamaw and Papaw.  He loves taking pictures with my phone (which is pointless because I still have an old-timey phone.  You can barely see the picture and I can't even get it off the phone if I wanted to!).  We thought he would enjoy having a camera that takes real pictures.  And we can upload them to keep forever.  It'll be fun to see the world through Derrick's eyes. 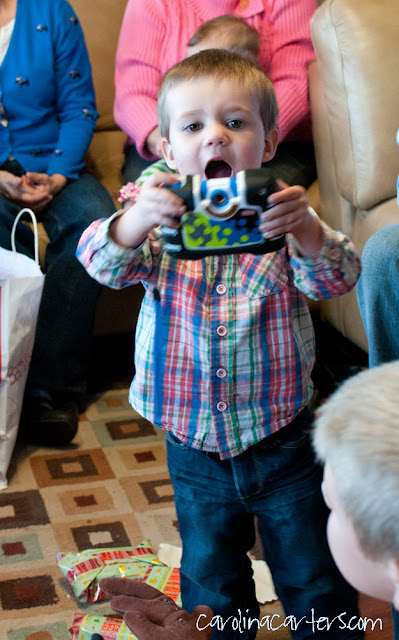 He also got this cute belt that Danielle made for him.  Complete with all of his "best friends". 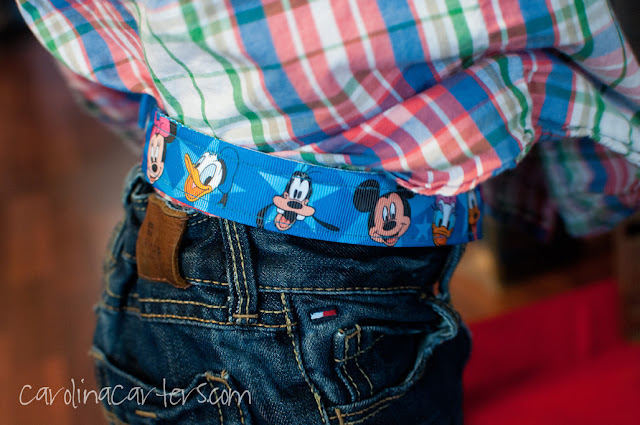 He loved the matching Mickey and Minnie chairs.  We'll see if he lets Jenny Kate have her Minnie chair of if he tries to keep her for himself! 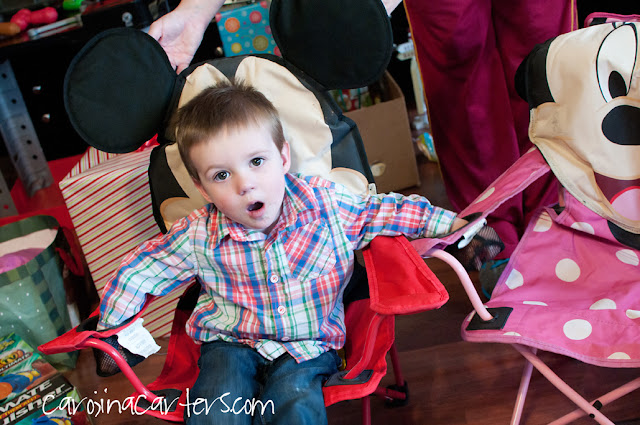 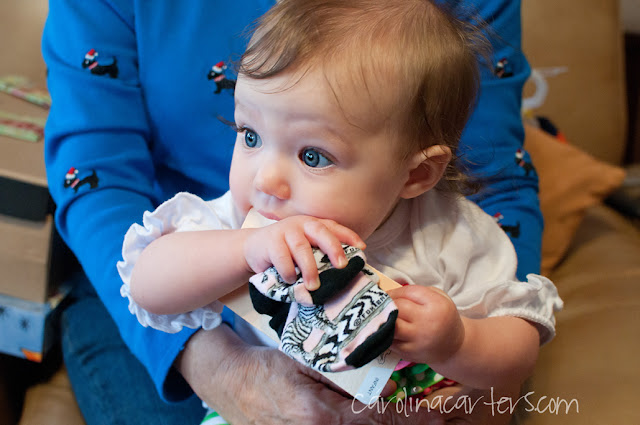 But she did get into her book. 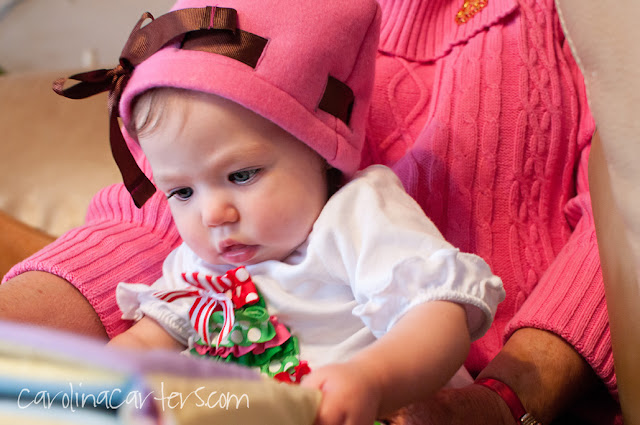 We all gave Mamaw and Papaw a big photo of all of the grandchildren together.  They loved it!  It was hanging in the living room by Christmas Eve night. 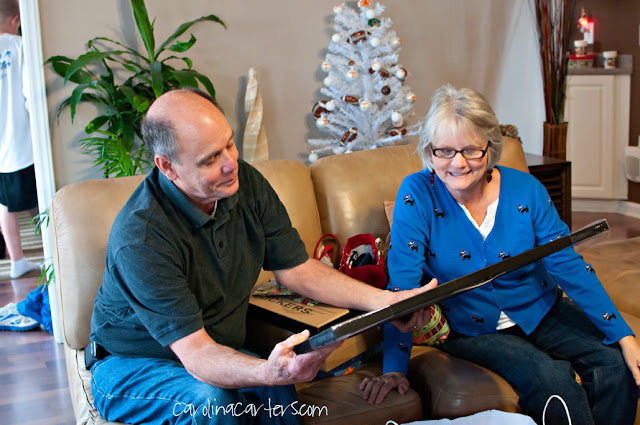 It was a little sentimental this year with Nana gone, and Justin and Danielle were each surprised with something special of hers.  Danielle got one of her wedding rings, and Justin was given the birthstone ring she always wore.  This one was a total surprise!
On the last trip we made to Tennessee before Nana had her stroke, she had some cleaning she wanted us to help with.  She wanted us to dust under her bed and to go through the covers and all through the bed because she was looking for her birthstone ring.  We cleaned and searched, but there was no ring.  Debby and Aunt Shirley looked everywhere for that ring after she passed away, but they never found it.  Fast forward to a few weeks ago.  Aunt Shirley had been praying about the ring.  She knew how much it meant to Nana and she really wanted to find it.  They were vacuuming out their van and she had this intense feeling to look under the seat of the van.
When she did, there was Nana's ring. 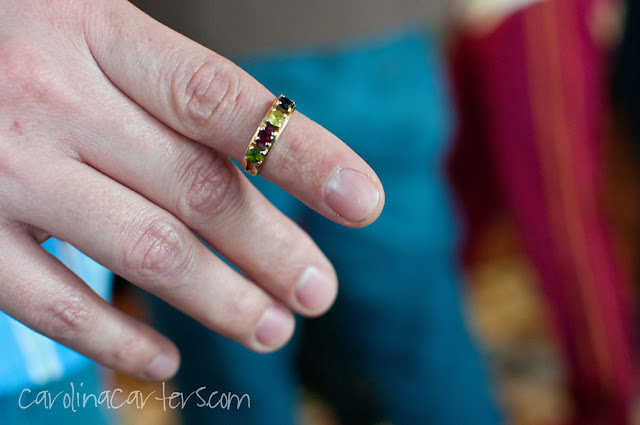 None of us knew she had found it until Justin opened it up on Christmas Eve.  Needless to say it was a pretty sentimental, special moment.  God has perfect timing, doesn't he?!
After the presents were finished we had a little more fun it was time to head to Gong Gong's house. 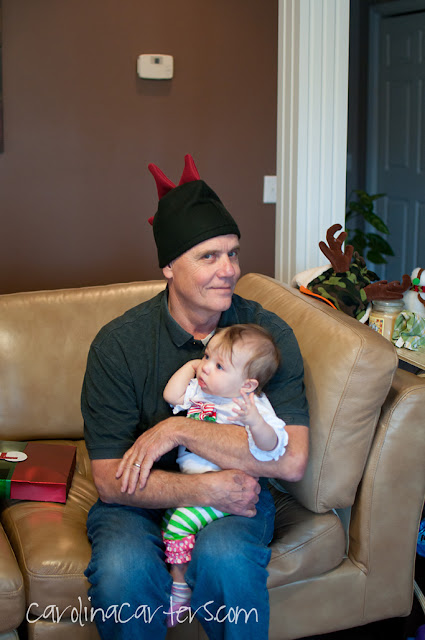 It was well after nap time when we arrived at Gong Gong's, so needless to say we had two exhausted little ones.  Jenny Kate played with her cousins for a few minutes, but she was pooped!  Poppie took her and maybe two minutes later, we saw this.  Worn out! 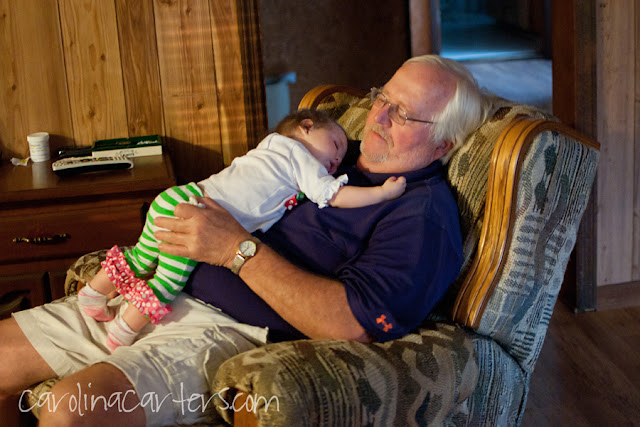 I got caught up in the busyness and didn't take another picture!  I hate that!  But we had a great time eating and playing with all of our cousins.
Once we got home, we opened one gift...our new pajamas! 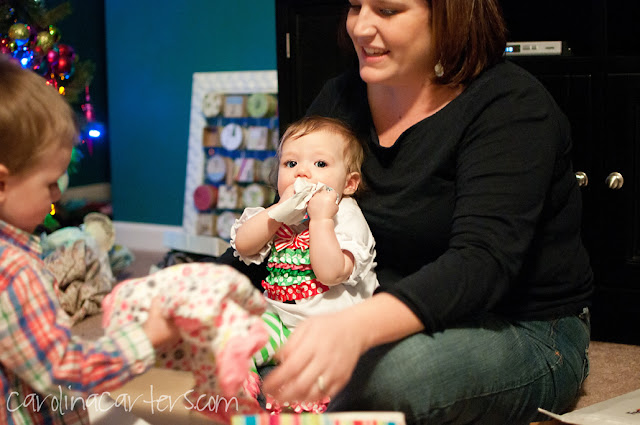 Derrick was a little bummed that it was pajamas, so he had to open Jenny Kate's too.  She was fine with that as long as she got her paper to chew on!
We got ready for bed, decked out in new pjs, and prepped the things Derrick had promised Santa. 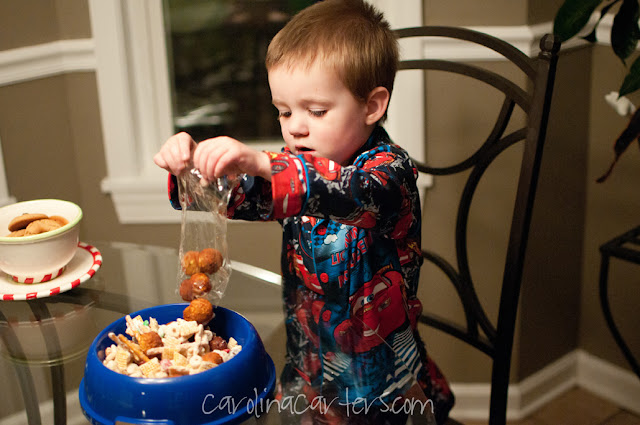 Jenny Kate wasn't interested, so she did what she does best....stayed BUSY! 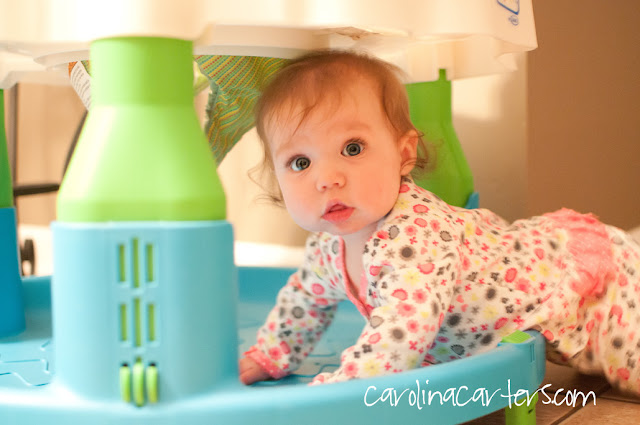 D finished Santa's snack just like he promised.  Cookies, "spicy", and a little something for the reindeer (white chocolate covered chex mix with a side of dog treats.  Yummy, right?!). 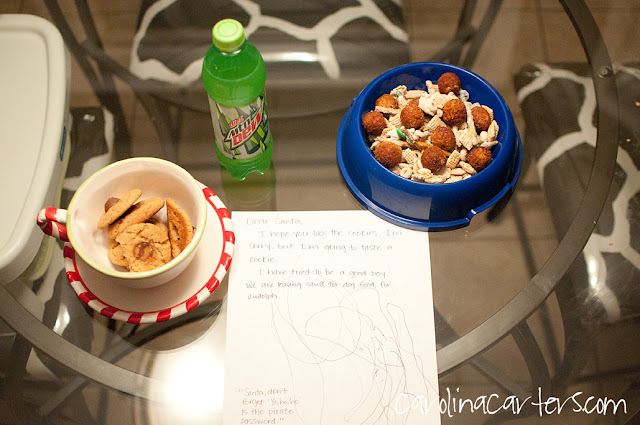 We wrote a little note to Santa, which read:
"Dear Santa, I hope you like the cookies.  I'm sorry, but I'm going to taste a cookie.  I have tried to be a good boy.  We are leaving stuff for dog food for Rudolph.  Santa, don't forget 'Yo ho ho' is the pirate password."
All of this, per Derrick.  He was telling me what to write as he was eating the chocolate kiss off of one of the cookies he left for Santa.  Such a mess!