Our Advent Calendar & Other Randomness

We finally have our Advent Calendar up and running this year.  It only took three Christmases to get to this point, but we're here, nonetheless.  Derrick's first Christmas I saw one online (that was pre-Pinterest, so I have no idea where I saw the idea) and decided that we had to have one.  Of course since he was only seven months old, there was no need in trying to do one right away.  Last Christmas I bought the little boxes and scrapbook paper and had most of the boxes covered by about eerrr, New Year's Day.  Between being preggo and moving into our house, I'm ashamed to admit that all of this sat on our dining room table for oh, two months or so.  I was happy this year when we pulled out the Christmas decorations that these little boxes were finished...but they weren't attached to anything.  I went to our office (which will be under major construction after the new year *I hope*), pulled out this baby, and hot glued the boxes right to the glass.  Done!  And we've only had one casualty.  :)
So, better late than never...our Advent Calendar: 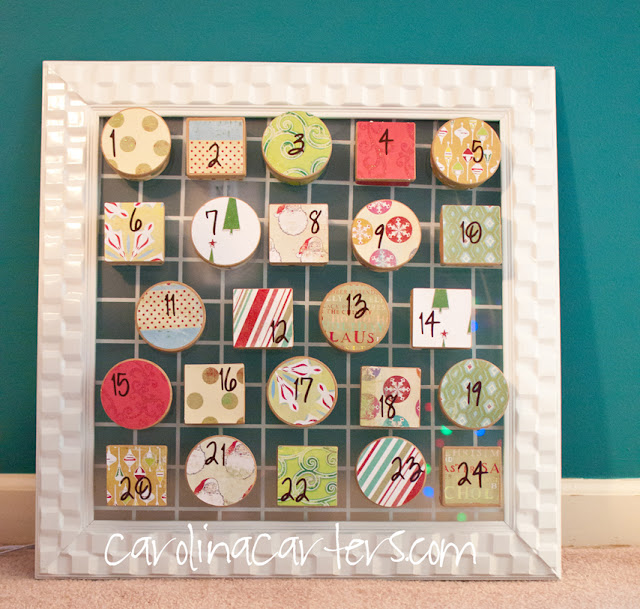 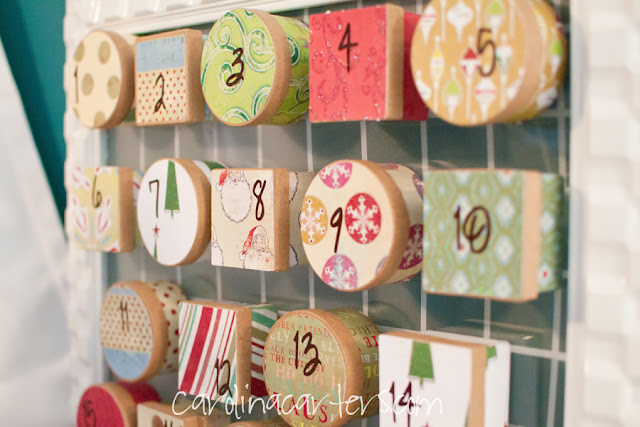 Derrick has thoroughly enjoyed opening the "boxes" every morning to see what's inside for the day.  We have an activity or outing every day, but I think his favorite part is simply opening the box.  It's a good thing, because sometimes we struggle to actually get the activity done.  I guess this year is our practice run because I know next year he won't let us forget a thing!
Flint has been busy keeping an eye on D and Jenny Kate.  We find him in interesting situations often, and Derrick loves looking for him every morning and after nap time.  He enjoys him being around, however he does not enjoy being reminded that Flint is watching him and reporting back to Santa daily. 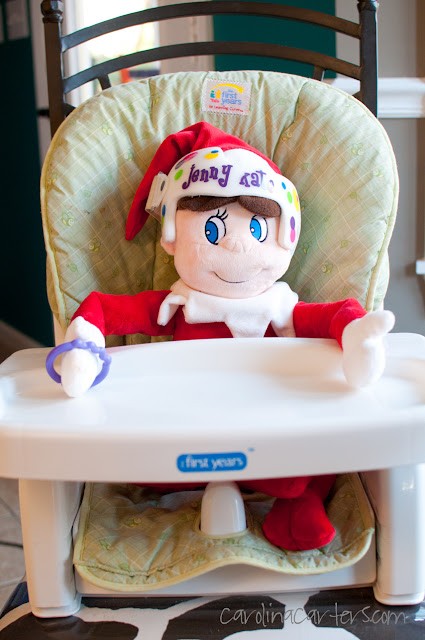 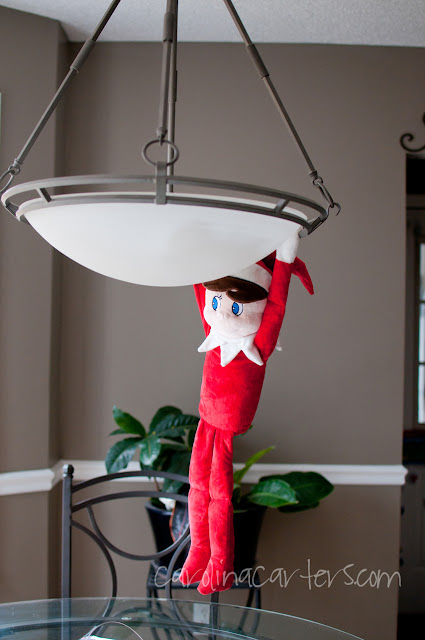 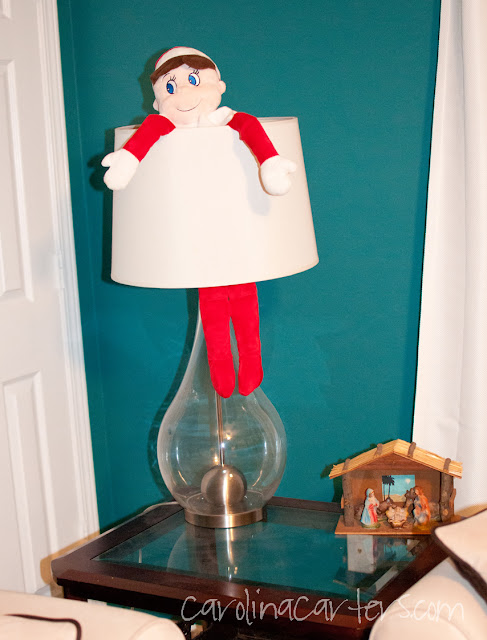 In other news, this girl has surely been keeping us busy!  She is now MOBILE!!  She hasn't perfected her crawl quite yet, but it's only a matter of days.  It's funny to watch her crawl.  She's so focused and deliberate in her moves.  Until she hits the floor, then she's just a mad woman!  There's no turning your back on her now. 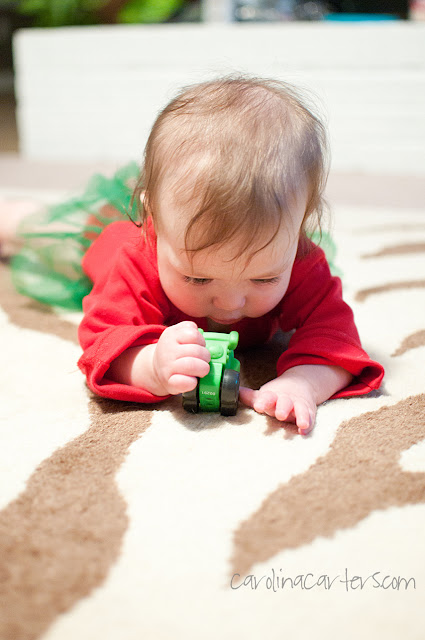 She wants EVERYTHING Derrick has.  Everything.  And when he's not looking, 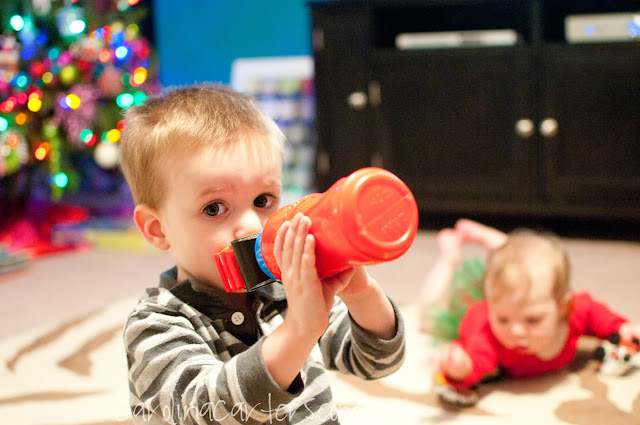 she goes in for the steal.  She never wants the 'bathtub' car that we give her that's all rubber and has no parts that come off.  She usually goes for the Cars cars.  Derrick's favorite, or course. 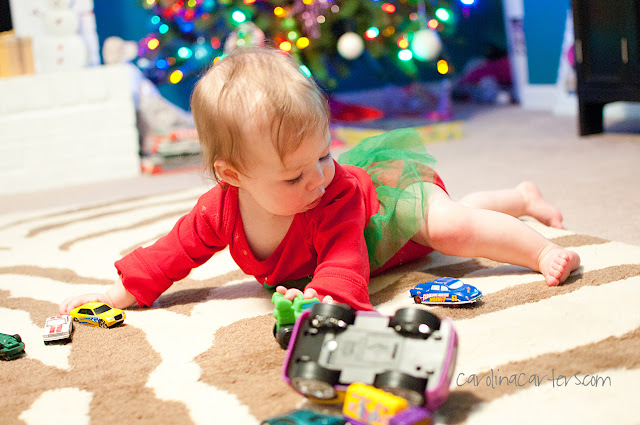 He's getting a little taste of what it's really like having a younger sibling.  Ha!  He has no idea what's coming!
Being the little rascal he is, he's also decided that he doesn't want his picture taken anymore.  At all.  Here he's saying, "No, mommy!  Don't take my picture!"  I don't know where that's coming from because he's had a camera in his face since the day he was born.  That's one battle he's not going to win! :)  Although that means we're probably stuck with a lot of strange-faced-memories while the battle continues. 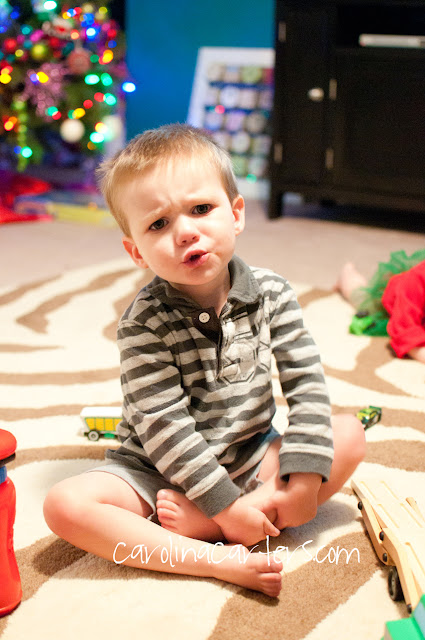