A trip to the ER and other germs

Ahhh...now that the sickness *seems* to be leaving our house, I'm finally getting a chance to sit down and update this 'ol blog.
I'll start with our scare.
Saturday morning, at about 4am, I was woken up by Derrick calling me over his monitor.  "Mommy, I'm breathing," he was saying in a somewhat urgent tone.  ("I'm breathing" is what he says when he's breathing hard or can't catch his breath.)  My heart was pounding as I flew up the stairs to his room.  He was sitting up in bed on the verge of crying, and he kept saying, "Mommy,  I'm breathing."
I scooped him up and took him to his chair to rock.  I figured he had probably had a bad dream or maybe his latest coughing spell had left him feeling breathless, so rocking should calm him down enough to go back to sleep.  He was lying in my lap completely still and kept opening and closing his eyes and repeating, "Mommy, I'm breathing."
I started to panic.  He never says this while he's sleeping.  He never falls asleep while I'm holding him and he certainly never falls into and out of sleep as he's talking.  Derrick is an all or nothing kid.  He's sleeping or he's awake.  If you wake him up it's over.  He's up and often there's no going back to sleep. 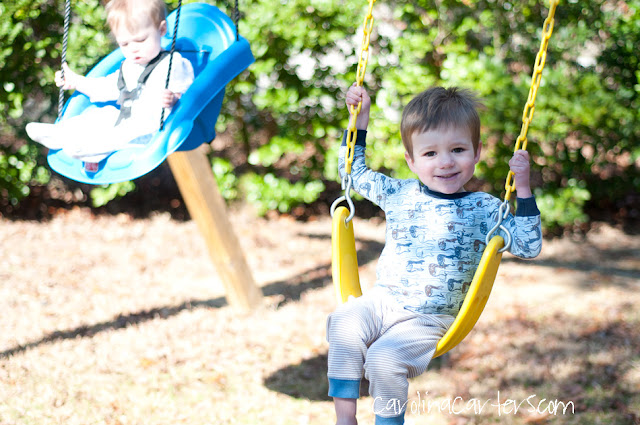 I decided to take him downstairs and check his sats (oxygen saturation).  I didn't want to freak anybody out, but I was worried.  Justin came into the living room with us and when we turned on the lights we could see how pale Derrick's face was.  He was completely void of any color.  We watched the pulse ox, then watched Derrick.  Watched the pulse ox, then watched Derrick.  His sats were right at 80 which is great for him.  I think we were both waiting to see his sats go down, but they didn't.  As we were sitting there Derrick was still saying, "Mommy, I'm breathing!" over and over.  He was saying it like he was trying to get me to help him, but neither of us could figure out what in the world was wrong.  As he was saying this, he kept slowly closing his eyes.  He'd open them and close them back, like he was trying to stay awake but he was losing consciousness.  This had both of us terrified so we called Justin's parents to come over and stay with Jenny Kate so we could take Derrick to the ER.
In the car he wanted to sleep but I kept talking to him to make sure he was ok.  He's normally a very light sleeper, but I had to shake his leg and call his name over and over to get him to respond to me while we were in the car.  Once we got to the hospital I got him out of his car seat and he popped his little head up and said, "Mommy, I feel better."
Seriously?
We were really glad, but really confused.  We went to check in and as I turned Derrick away from the receptionist, Justin heard her say to the other girl, "Um, do you see his lips?!"  We kind of chuckled and told them about his heart and that he always looks this way.  (The color in his face had come back by now.)  Would you believe that we didn't wait in the waiting room more than about 30 seconds before they were calling us to triage?  It's amazing how quickly little blue lips will get people moving! :) 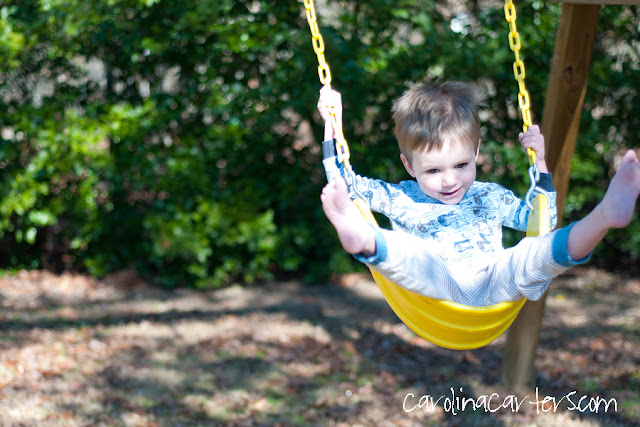 We got to a room and Derrick was his normal self.  He watched tv, played with Lightning McQueen, talked.  He was fine.  We were stunned.
They checked him out, did a chest x-ray that came back clear, and gave him some Powerade and a popsicle.  He was hooked up to the pulse ox the whole time and his sats were fine.  They told us to follow up with our pediatrician that afternoon and sent us home.  They had no idea what had happened.  We were both relieved that he seemed better, but not having an answer was not comforting at all.
When we got home Derrick ate some eggs, drank his chocolate milk and had another popsicle before we headed to the peds office.  The doctor listened to him again (this was the 3rd trip in 11 days to the peds office for cough/yuck) and heard a little wheezing when he coughed.  He started looking pale again so she wanted to check his iron.  Last time his iron was checked it came back in the normal range, but his cardiologist wanted it higher so he's been taking an iron supplement.  She wanted to make sure that was working. 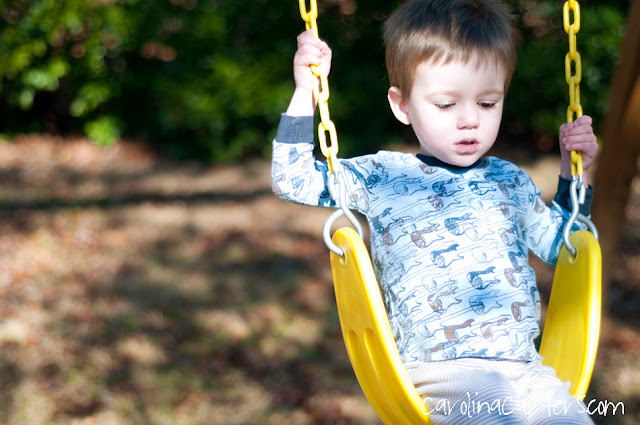 The nurse came in with the iron checking paraphernalia on a tray, and she also had a glucose monitor.  At that point it hit me.  Derrick had insisted on eating a few bites of banana before we headed to the hospital that morning.  I wouldn't let him have much because I was afraid he would choke since he was zoning in and out of consciousness, but he did have about three bites.  The drive to the hospital took about 15 minutes, and when we got there he was completely fine.  Hmmmm.
His iron tested fine and his blood sugar was 77.  That's normal, but on the low end of normal.  And it seems a little low after having a popsicle and chocolate milk about 45 minutes before checking it.  So, we left the doctor's office with a little more information but no definitive answer as to what in the world had happened to Derrick that morning.
We have a follow-up for Derrick's ear infections on Friday and we plan to talk to his pediatrician more about this whole blood sugar thing.  We both feel at peace about thinking that it was the blood sugar and not his heart, which of course was our initial thought.  We need a plan, though.  Him bottoming out randomly is not ok with us.  He's been sick since the beginning of January, so that could be a factor.  And of course he never eats like he should, but he didn't eat much of anything Friday because he was feeling pretty bad.  But still.  This mama needs answers! 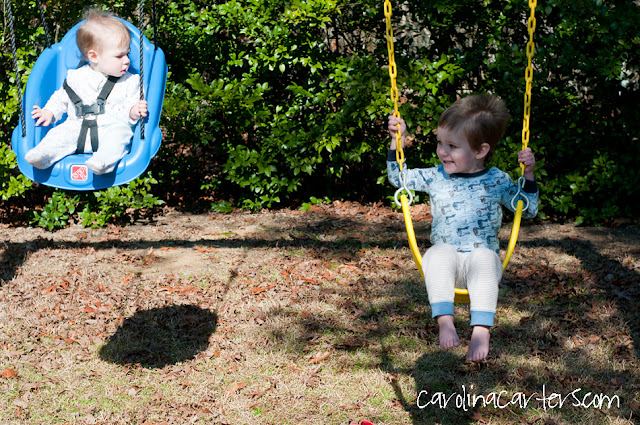 After all of the excitement that morning, that afternoon we all got hit with the stomach virus.  This lovely stomach virus was on top of Derrick's double ear infection with round 2 of antibiotics, this time the vicious Augmentin ES, and his awful cough and congestion, and Jenny Kate's unexplained virus complete with cough, congestion, sleeplessness, and rash.  After she just got over her strep throat, of course.  We were quite worried that round 2 of the stomach virus was coming for Derrick, but we're pretty sure that it's the aftermath of each dose of Augmentin, despite the Florastor.   That stuff is brutal!
The good news is that we're on the mend!  Things seem to be getting better around here and I'm hoping that the windows being open on this beautiful almost-70-degree-day will free the rest of the germs from our house! 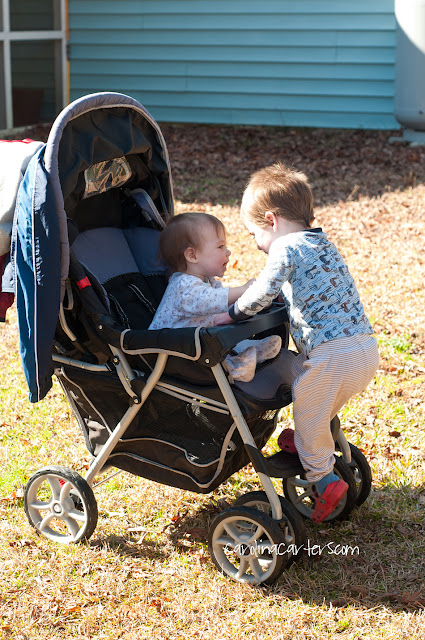 I'm so thankful that this scare with Derrick doesn't appear to be because of his heart.  It's always my first thought when anything strange happens with him and it always throws me into quite a panic on the inside.  It did bring me back to reality though.  The reality is that we'll never know what's coming and most times don't know why.  Not just with a special heart, but with anybody.  It made me realize that taking care of sick, non-sleeping children is still a blessing, no matter how tough and patience-pressing it is.  Every single day is a blessing.  It's a gift, and it's really easy to lose sight of that.  While I would prefer to not have to be reminded through trips to the ER, I am thankful for the nudge from the Lord to enjoy life right now.  Snotty noses and all.
These pictures are from our morning in the yard, soaking up the beautiful  January sunshine!  (Yes, in mis-matched pajamas! :)