I've been so terrible about updating this 'ol blog about life lately, so here we go...
What has it been, almost a month now since we had the Hope for BraveHEARTS breakfast?  Well, it ROCKED!  It turned out way better than we ever imagined and we are so thrilled!  We served 317 paying people (people 5 and up) and tons of kids.  We sold around 20 cookbooks (didn't keep a good count) and 94 t-shirts.  Not including the shirts and cookbooks, from just the breakfast, we made a whopping $3,700!!  It was awesome and we are so, so thankful for all who came out and supported Hope for BraveHEARTS and CHD research!  Everyone seemed to have a great time which makes us even more thrilled!  Someone told Justin that we should have a breakfast once a month.  Ha!  Not! :)  We also had a super crew of friends and family who showed up at the crack of dawn (6:45 to be exact-YIKES!  That's so early!) on a Saturday morning.  We are so, so thankful for them.  Obviously they worked those tables right, right?! :)  Thank you so, so much, friends!
After the breakfast Derrick, Justin, and some of their guy friends went to the Monster Truck Jam.  We just knew D would hate it because we were told it was so loud.  The boy LOVED it!  He still talks about it all the time and his favorite toy now is his Grave Digger truck.  The guys took the little boys to Walmart afterwards and let them pick out a monster truck instead of buying them one at the show.  Pretty smart thinking, huh? :)   We're afraid that Derrick's new obsession is going to lead him to want to drive Monster Trucks.  OMG.  I never saw that one coming! Ha! It looks like his birthday party theme has officially changed now...
While the boys were watching trucks smash things, the girls went to see the Vow.  It was as awesome as it looks!  Jenny Kate stayed with Nonna and Poppie where I'm sure she was treated like a princess and didn't miss us a bit.  It was lots of fun.
That Sunday we went to the circus.  Not the big Ringling Brothers and Barnum Bailey Circus, but the Shriner's Circus.  It's small, we get to sit up close, and we were given free tickets! (Thanks, Robin!! :)  We took Derrick for the first time last year and he loved it.  This time he knew a lot more about what was going on so I think he liked it even better.  Jenny Kate enjoyed it too.  She sat on my lap just as content as she could be (which is NOT like her at all!).  She loved the music and was dancing and clapping at least 60% of the time we were there. 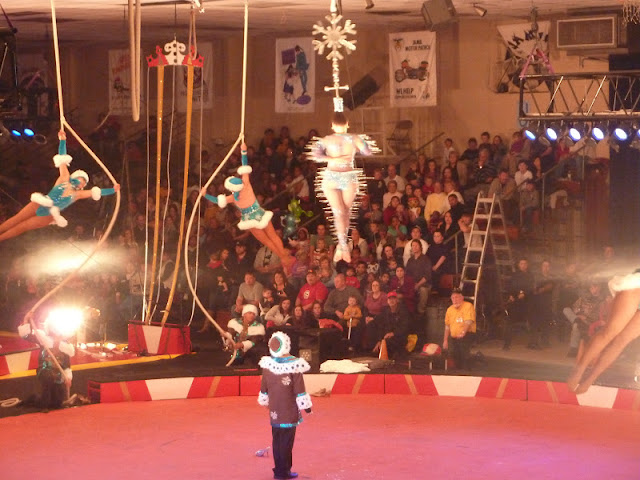 That poor girl who hangs by her hair is still hanging around.  Yikes, that makes my scalp hurt!

I was super excited about going to the circus for one reason.  My husband made me a promise last year that he had to make good.  I was going to RIDE AN ELEPHANT!  Seriously, if I could be one of the elephant riding girls in the circus that would be the most awesome job ever.  You know, as long as I could come home every night. :)  Anyway, Derrick was (almost) equally as excited as I was to get on the elephant.   I just pretended that we weren't on the elephant with 3 or 4 other people and that I was doing fun little stunts on his trunk to make my real dream come true.  Ha!  It was fun, though.  Derrick still talks about it and I'm pretty sure he's going to be my ticket to getting an elephant ride once a year.  Maybe even twice if the elephants are at the fair again! 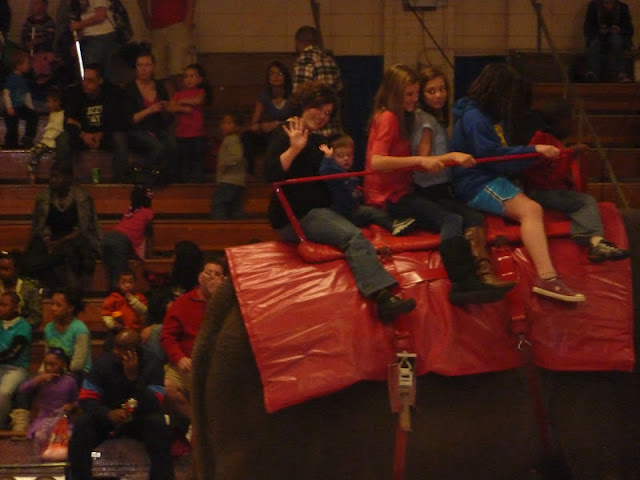 Jenny Kate is in her big girl car seat now and she's much happier.  She still cries or fusses for a second almost every time we put her in the car, but I think it's because she usually gets in first and looks over and sees that D isn't in his seat.  Once he gets in she's good to go.  She loves her brother! 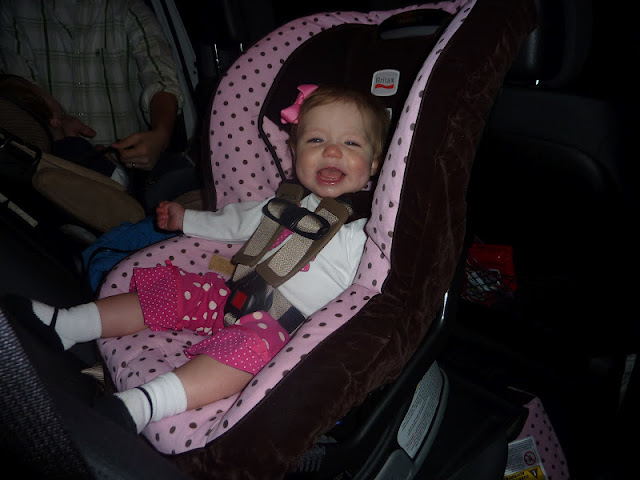 Other than that we haven't done a lot outside of working at home.  We remodeled our laundry room in hopes that it helps me be better at doing laundry.  So far it hasn't worked so well.  Laundry seems to be one thing that I am just not good at!  I'll throw a load in the washer and completely forget about it for three days.  Then I have to wash it again and if it makes it to the dryer I forget about it again and the clothes are all wrinkly.  It's a vicious cycle and I really just hate laundry.  Anyway, Project Laundry Room Overhaul is almost over.  There are a few little details that need to be finished and we can call it complete.  I'll post pics when it's finished.  Until then, here's a peek at the awesome help we had. 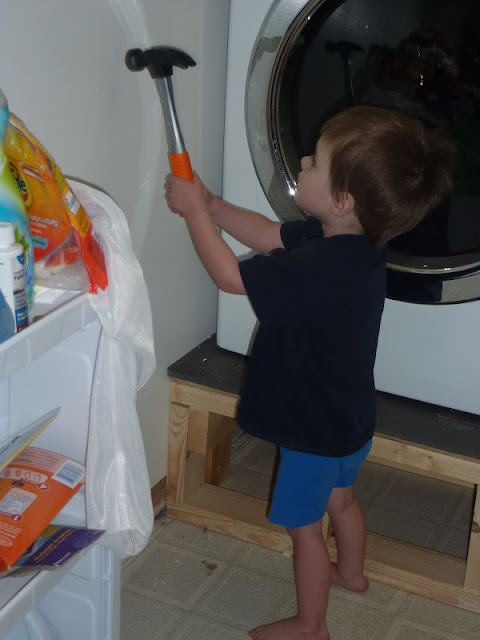 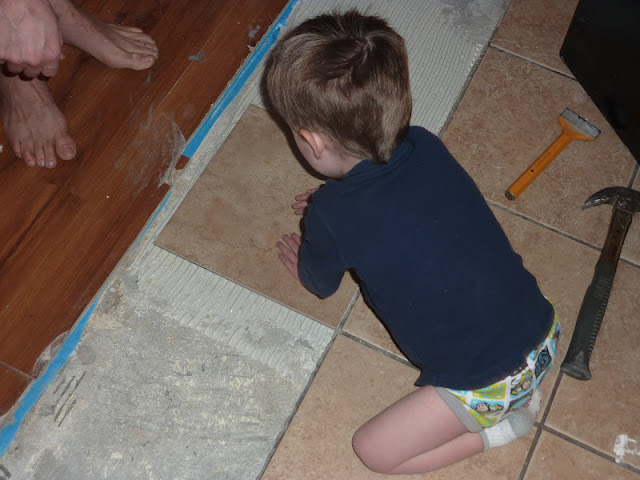 We also busted out a wall between the kitchen and dining room.  I'm loving it!  Since the wall was messed up, I thought it was a perfect opportunity to break the news to Justin that I'd like to change the color in the kitchen.  I'm pretty sure he wasn't surprised.  I think finding a color for the kitchen has been the most difficult one for me.  I really wanted something light and airy.  I absolutely love the color we painted in the laundry room, which is very airy and relaxing, so off we went for another gallon of 'tranquility'.  Let me just say that it's a much better laundry room color than kitchen color.  We now have an unopened gallon of 'tranquility' to add to our paint collection and a new color on the walls.  The new color is quite bold.  It's PURPLE!  I think I love it. Once it's put back together I'll post pictures.

Here's a sneak peek...excuse the mess!
The newest thing that's taking up a ton of my time is cooking.  We gave up processed food for Lent.  I've been wanting to do it for a while but I knew Justin wouldn't be totally on board at first.  I decided to sucker him in by doing it for Lent.  To be completely honest, it's not been that bad.  The first couple of days were rough because I had no idea what we were going to eat, but now that we're in a good routine, I really enjoy it.  I like knowing exactly what I'm feeding my family and knowing that we're not eating a bunch of science words!  I've been making bread, tortillas, granola, pop tarts, muffins and today I made cream of mushroom soup.  It's work, that's for sure.  I'm pretty much spending my alone time during the day bonding with my Kitchen Aid.  Now that we're beginning week four it's getting easier and I think this is going to be a lifestyle change for us.  It feels good! 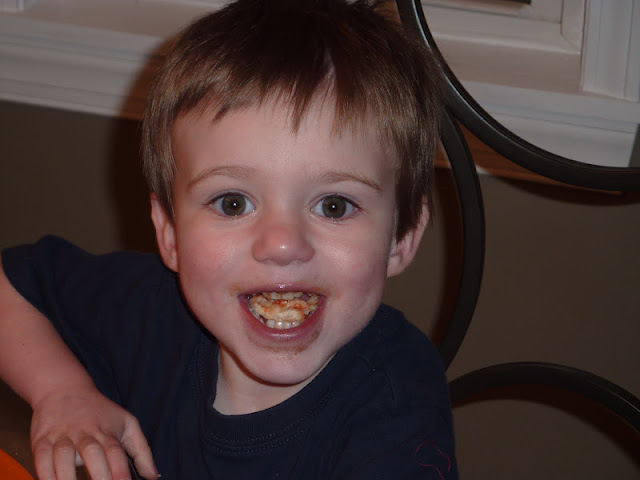 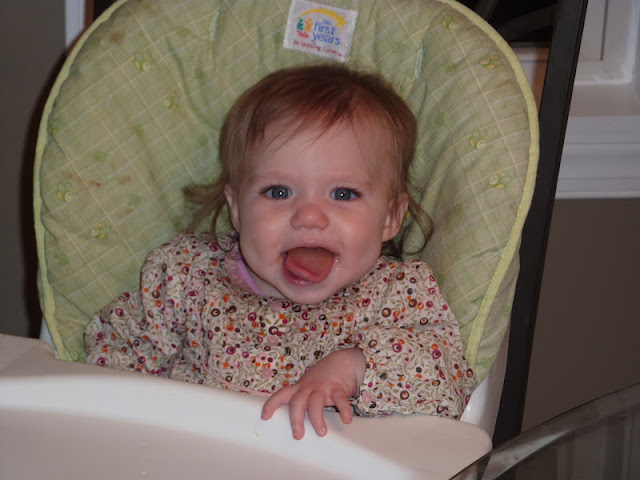 That was a lot, and I'm super surprised if anyone made it all the way through.  Actually, I'm pretty surprised if anyone even still reads this blog anymore since I'm so awful about posting these days.  I miss it and have to get better.  Our kids are going to wonder if we fell off the face of the earth these last several months when they look at this one day!