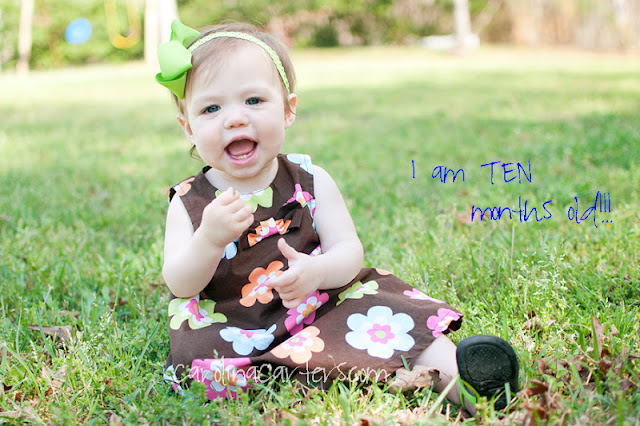 You have turned into such a little girl lately. You don't seem like much of a baby anymore at all. You're so full of personality!
You love attention.
You like to be chased. When you have something you're not supposed to have (which is quite often), and you see us coming for it, you'll take off and crawl so fast! You'll make a little shrieking squeal and laugh as you crawl away as fast as you can.
You are not ashamed to carry things in your mouth that you want to take somewhere else. You're like a little puppy sometimes.
You're pretty social. You are very interested in other kids and are not too shy to crawl right over to them and stare. Sometimes you try to join right in. If they're smaller than you, you don't hesitate a bit!
You love to dance. You dance to anything and everything and even have that same little arm move that Derrick used to do when he was your age. (Are dance moves genetic? :) You were rocking out last night when Daddy and Derrick were jamming on their guitars. Apparently to you they were making beautiful music...and you were the audience, so that's all that matters. :) 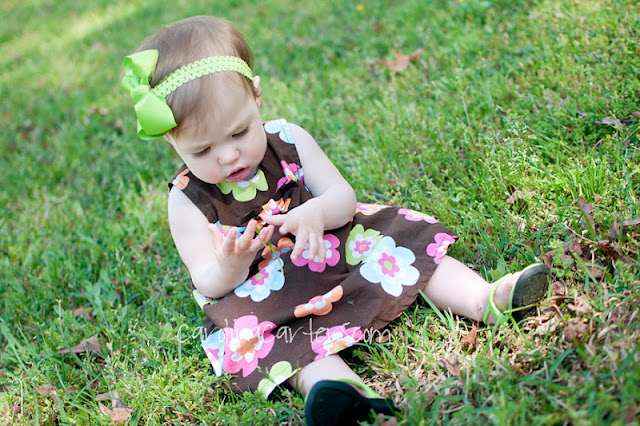 You still think your brother hung the moon.
You're still quite the mama's girl, but you're really starting to love being with Daddy. You think he's so funny! Keep working him girl, you almost have him right where you'll want him.
You are super silly.
You can stand now for as long as you want to. You just pull up and let go. You'll stand on your own and play with something or squat down and stand back up with no problems at all. I was certain you'd probably have taken a step of two by now, but you haven't tried yet. You're a super fast crawler so I can't imagine what life will be like when you can walk. Who am I kidding?! You're not going to be a walker. I'm pretty sure you'll just start out with running!
You love to eat.
You will joyfully eat anything we give you. If you see someone eating, you think you must be eating too. You've tried all kinds of foods now and you seem to love them all. There's only one thing you've tried that we know for sure you don't like...jalapeno peppers! I can't imagine why! We actually gave you that accidentally. (I promise!) I made some mango-avocado salsa the other night that we had with dinner. You love avocados and mangoes, so you were chowing down on it. Daddy decided to let you try a little bell pepper and when he put it in your mouth you made this really sad face and your eyes filled with tears. It looked like someone had just taken away your favorite toy! You let out one of those really sad, pitiful cries so he fished it out of your mouth (it was tiny) and we decided that bell peppers hurt your feelings. As it turns out, it was in fact a piece of jalapeno pepper, not bell pepper! Sorry girl! :) We totally understand why that one made you cry! 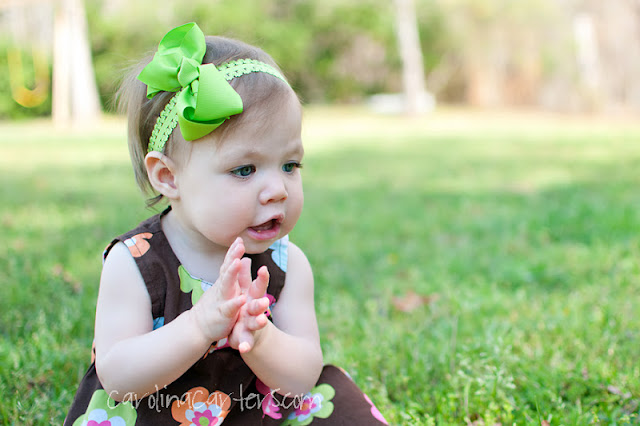 You're loving your sippy cup. All we've given you is water, and to be totally honest, that's probably what we'll stick to for now. (You've had juice twice in your life and you weren't a huge fan, although it's been a little while.) But you LOVE water! You're getting pretty good at holding the cup up high enough to drink it by yourself and you love the independence. When you see us coming with your cup you get so excited!
Milk in your cup makes you cry! :)
You are a happy girl most of the time. When you're not happy you're furious, but I'd say you're happy about 90% of the time. Seems pretty good to me, especially thinking back to how we started out!
You play well on your own.
You still put every. single. thing. you touch in your mouth. I'm pretty sure 'the grosser the better' is your motto.
You love to swing.
You're starting to talk a lot. Most of it is not in English, but Derrick tells us all of the time what you're saying. Apparently the two of you have your own language. According to him, most of the time you're talking about CeCe or Cars. And occasionally monster trucks.
You say 'Da Da,' and we think you're either saying 'dog' or 'doodie' (one of our dog Andy's many nicknames). We're not sure which, but it's always when Andy is around. It comes out as "Duh" or sometimes "Duh Duh" or something like that. You started making the "B" sound recently and we think you're working on saying 'Bubba.' You FINALLY started giving me a little recognition, but it comes out as "Na Na." That's ok, I'll take it! When I walked in the nursery at church to get you Sunday you saw me and said, "Na Na!" It's so exciting to hear you calling me, and I'm sure Nana will be super excited that her name will come easily for you!
You love to laugh! You just giggle all the time. I've been thinking so much lately about how much you remind me of Jenny. It's not just your name, but you really make me think about her so much. A few weeks ago marked seven years since she's been gone. I've been thinking over the past few weeks about how I hope so badly that you stay silly and giggly. Jenny, Miranda, and I used to get in trouble all the time for giggling in class. I'm not sure if we usually had a reason, but if one of us giggled, we usually all ended up with our names on the board. All the way up through high school it was like that. I really, really hope that you stay a silly, giggly little girl. It's so much fun and I promise, even if you get your name on the board with your little girlfriends, you won't get in too much trouble. (As long as you're not being ridiculous, of course! :) 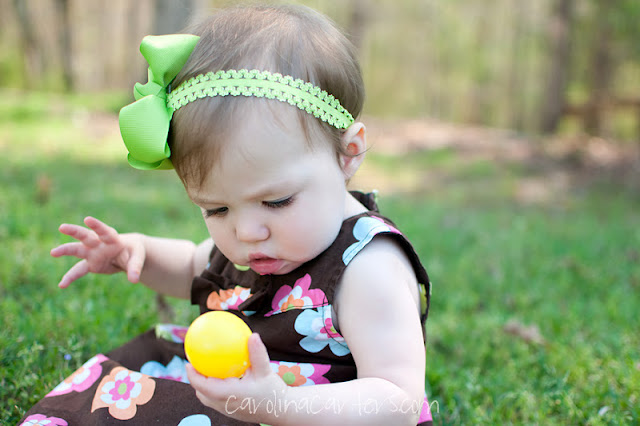 Jenny Kate, we love you so, so much! You have such a fun little personality and we love watching how it develops even more every day. You are snuggly and sweet when you want to be, but you are spunky, sassy, and on the move most of the time. While you keep us on our toes, there's no other way we'd rather you be than exactly how and who you are. We love you, sweet girl.
To the moon and back!