And I thought two was hard!

I want to go back and point to myself last year and laugh.  I thought having a two year old was challenging.  Ha!  A three year old...now that's TOUGH!

Yesterday morning Derrick was the most helpful little thing ever.  I was trying to finish working on something and he wanted to help Jenny Kate drink her bottle then he went to the toy closet and brought her favorite toys out so she could play.  He was so sweet and gentle but then out of nowhere he was whining and screaming and yelling for no apparent reason.  It was literally like someone had flipped a switch.  Where did my sweet boy go and who is this little thing who sounds like he's had no home training?!

In spite of the crazy tantrums and everything I do being wrong, we do manage to sneak in a few moments of three year old happiness.  One way to keep a smile on his face is to take him outside.

He enjoys being a total daredevil.  So much that he will eat a few more bites of food sometimes if we agree that when he gets bigger he can jump off of his monster truck tire by himself. 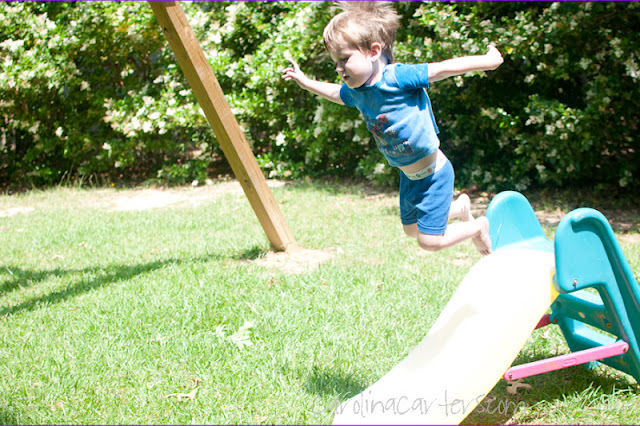 Hours of happiness are added when you throw water in the mix. 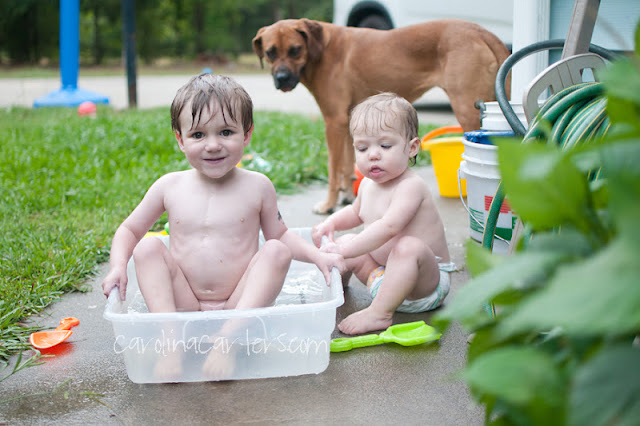 Even when that well water is extra cold, 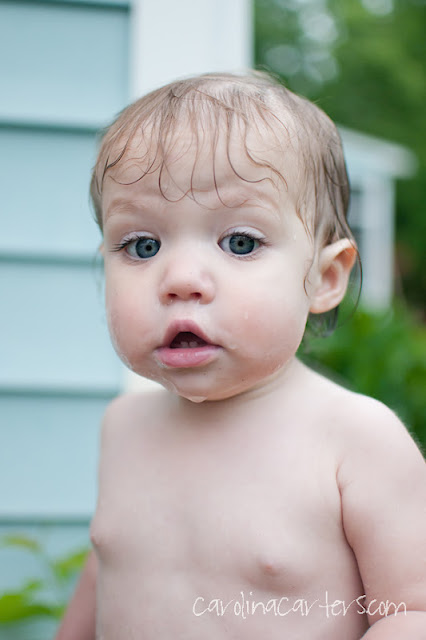 it's still tons of fun! 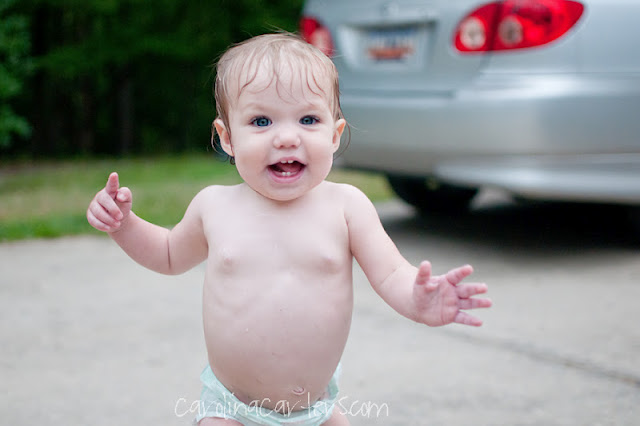 When he's stuck inside, Derrick is often happiest when he's taking care of "his" baby, Anna.  (Or Ay-nah, as he calls her.)  She cries a lot, so he has to hold her and burp her often.  He's a good little daddy. 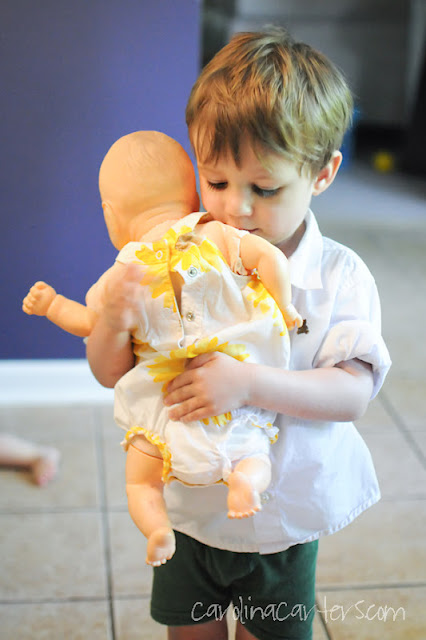 He always makes sure she's well fed by asking for a snack for himself then feeding it to Anna.  I've had to do the finger sweep on Anna several times for goldfish and banana.  He understands that he has to ask before feeding Jenny Kate anything, but Anna...poor girl. 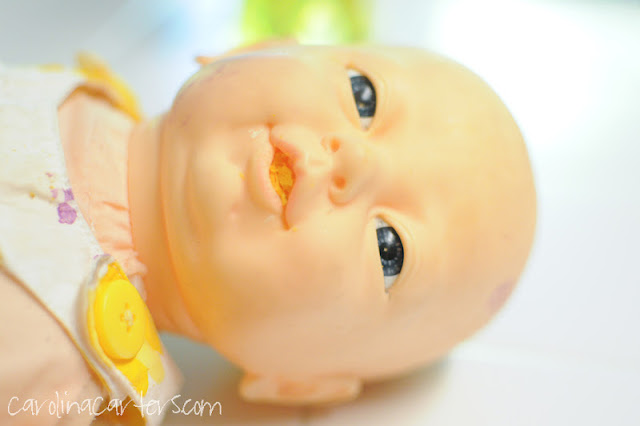 He has been teaching Jenny Kate how to play with cars.  She is actually very good at driving this little car around and has been seen scooting all over the kitchen floor driving this little car around.  He's also trying to teach her how to hand the car to people instead of throwing it, but he hasn't been so successful with that.  It's adorable to watch these lessons and he's a very patient teacher, he just has to duck while she's learning. 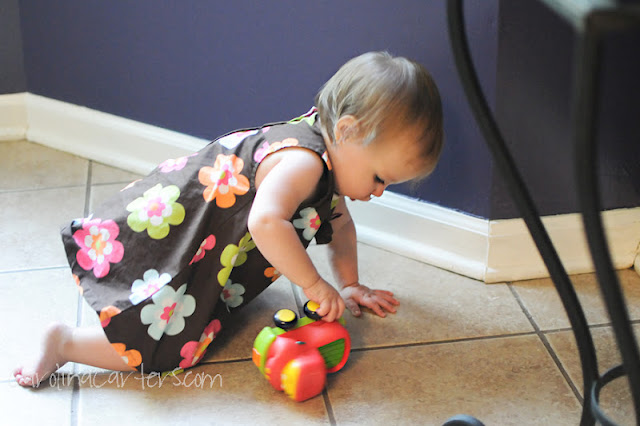 Derrick loves to "do a project" and his favorite thing to do right now is use a glue stick.  He doesn't mind if there's nothing to glue; drawing on paper with the glue stick makes him quite content.  We need to invest in more glue sticks. 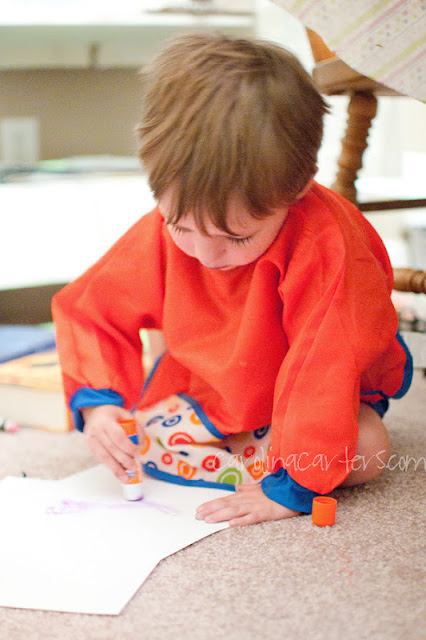 He also still loves to paint!  He decorated my mom (Nona) a luminary for Relay for Life.  She's a breast cancer survivor and he was so proud to "paint a bag" for Nona. 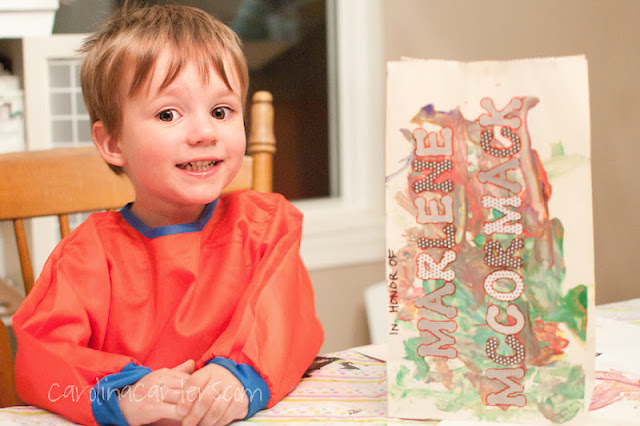 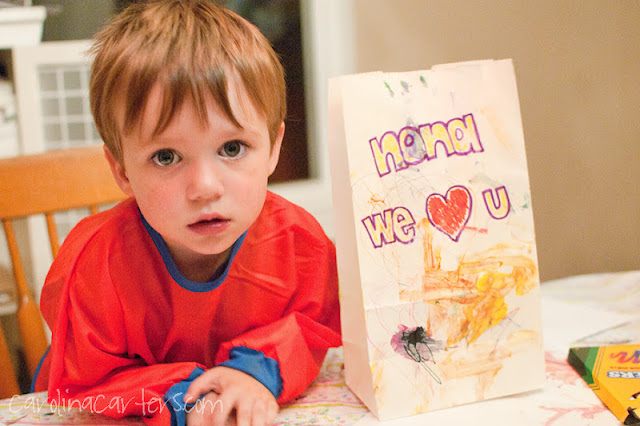 I really am enjoying how independent (oh, so VERY independent) my little three year old has become.  I love that we can have real conversations and that he loves to help us do things.  This really is a fun age, but it definitely isn't without it's challenges! :)


We've struggled through tantrums for the past few days and I'm really hopeful that they leave as quickly as they came!  I don't even want to hear about it if four is any worse because when he's four, JK will be two and...