A Little Girl's Nursery and a Big Boy Room! (Finally!!)

I've only been meaning to put pictures of our kids' rooms here for about a year and a half, and I kept putting it off because there are still a few little details that I want to change before they feel really "finished" to me.  Well, today is "Show us your Kids Rooms" over at Kelly's Korner so I thought there was no time better than the present to share them with you.

This is the view as you walk in her room.  (It's painted "Minty" by Valspar.) 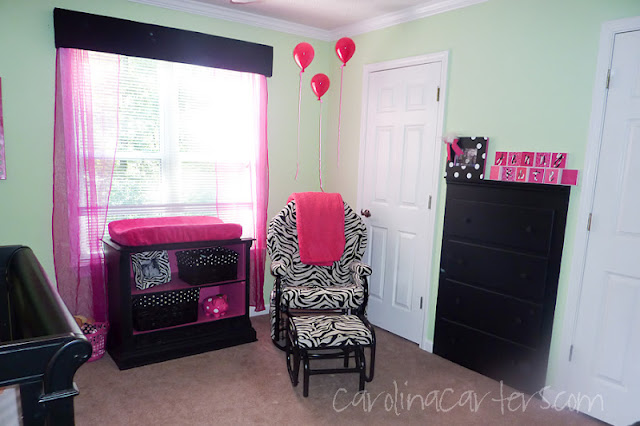 Here's her bed.  This is such a strange thing to try to take a picture of.  We decided to do two little pillows on the back side of her crib instead of a full bumper.  The bumper was such a waste in Derrick's crib and I thought that if we did pillows she could use them on her big girl bed someday.  (If of course the overall look of her room doesn't change, which if you know me well, you know that's always a possibility. :) 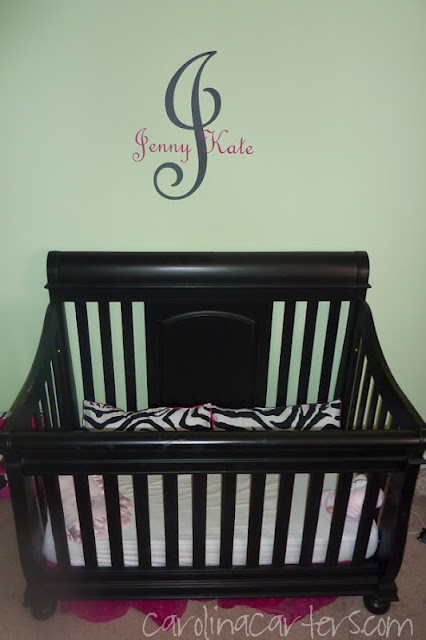 I couldn't use my good camera for these bedroom shots, so the color is a little off here, but here's a close up of the decal above her bed. 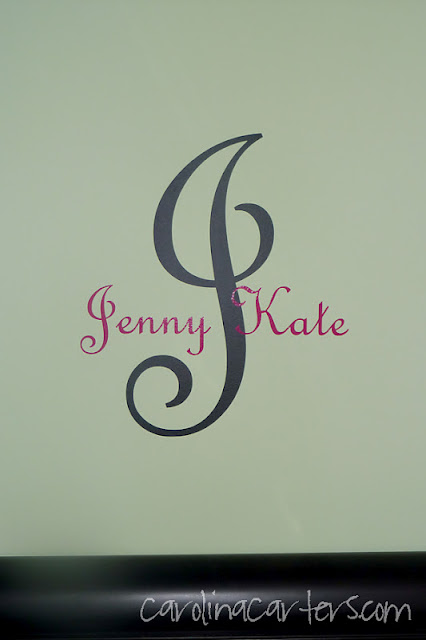 Her changing table/shelf/total trash makeover sits under the window.  I really have to share a before and after of this baby!  You wouldn't believe what it used to be! :) 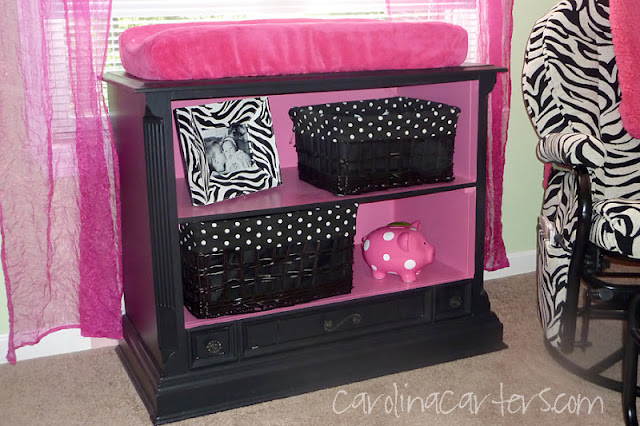 I think one of my very favorite parts of Jenny Kate's room is her chest of drawers.  Both of the kids have two closet doors in their room and the closet runs all along the wall.  It's great because there's a lot of room, but it's pointless because you can't see what's hanging in the middle of the closet because there's a wall in front of it.  We decided to do a built-in chest of drawers that opens right out of the closet.  I LOVE it!  It doesn't take up a single bit of space in her room, has really deep drawers (as deep as the closet) and it makes a useless space useful.  My dad was the handy man for this little project.  :) 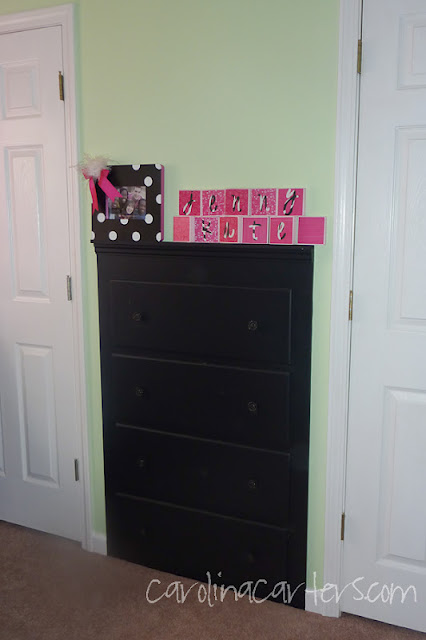 Here it is with the drawer open a little so you can see it.  Yes, I realize the picture frame is filled with college aged kids whom we don't know (filling picture frames is one of my real downfalls) and the blocks are another one of those details I want to change but just haven't.  I made them before she was born and decided I didn't like them.  I'll put something else there eventually. 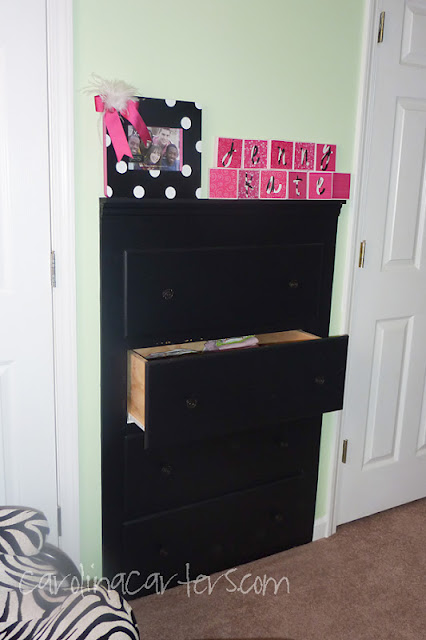 This is Jenny Kate's dressing table.  It was Justin's great grandmother's  (I think).  We painted it, put new hardware on it, and covered the seat.  (You can see before pictures at the bottom of this post.)  I think it's perfect for a little girl! 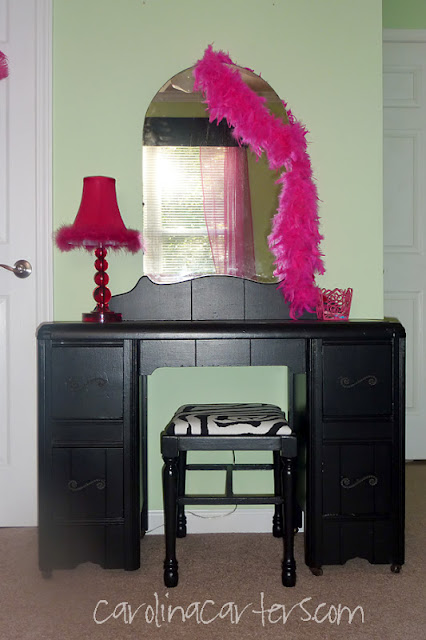 This door leads to the bathroom Derrick and Jenny Kate share.  Both of their rooms have FOUR doors in them.  Isn't that insane?!  The bear Derrick made for Jenny Kate before she was born sits in the chair.  She LOVES that bear! 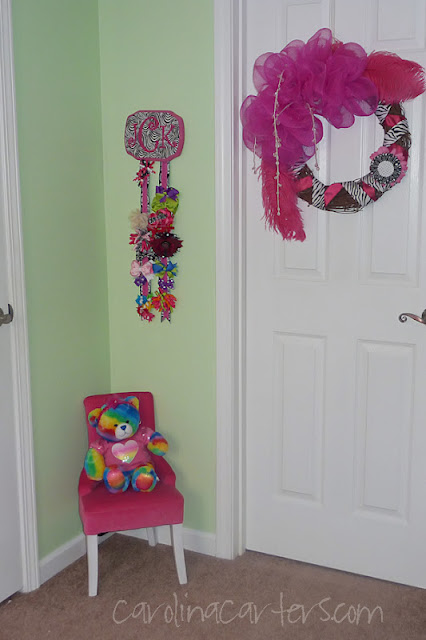 My friend Jess made this wreath for the hospital door when JK was born.  It had a cute little plaque with her name in the middle of it but it came loose and I never bothered to fix it.  I love it so I'm so glad she made it to match her room. 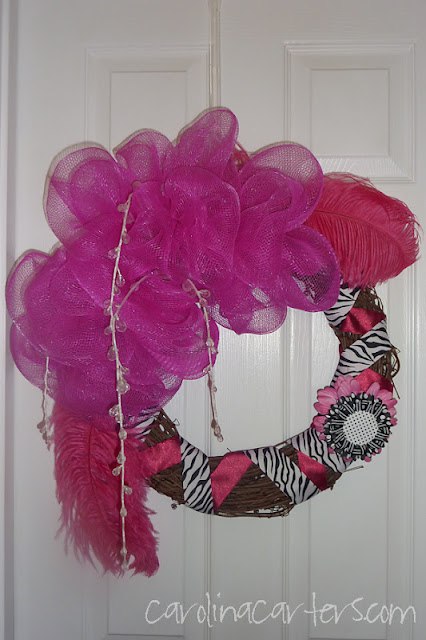 Just a few other little things:

A gigantic pillow that the kids love to jump and flop all over sits beside her crib. 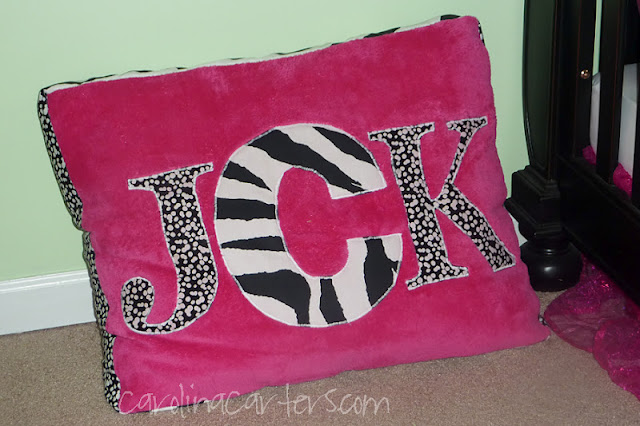 Her first tutu, made by Aunt Danielle, hangs on the wall near the door.  It's hanging on one of those wooden plaques from Hobby Lobby for probably $1 and I painted it, put a piece of scrapbook paper on it, and attached this doorknob that belonged to Justin's great grandmother (? I think?).  It's old, that's all I can remember.  I thought this was a fun way to do something with it.  And every little girl needs a tutu, right?! 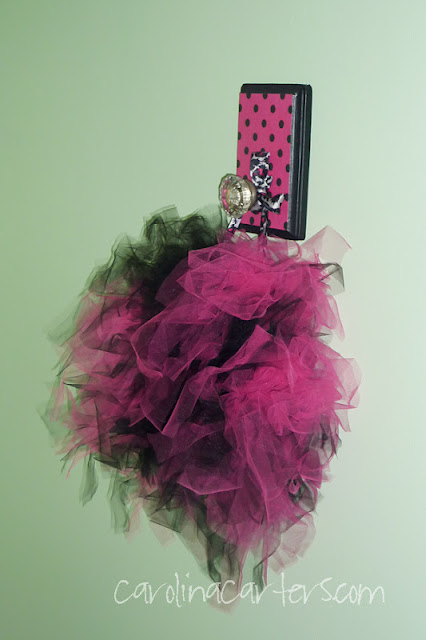 This mirror hangs on the wall directly across from the door.  It came from the clearance isle at Marshalls and it was originally brownish/redish.  A little tape and a can of spray paint later, it matches her room perfectly! :) 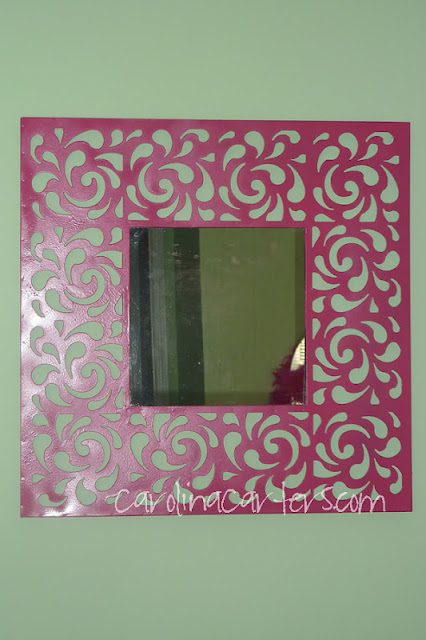 This is a close up of JK's bow holder.  We tend to have bows all over the car and house since the girl pulls them off all the time, but this is where they're intended to go, anyway.  This is another $1 plaque from Hobby Lobby that I painted and covered with scrapbook paper, added her monogram with vinyl and stapled some ribbons to the back.   It works for now and was a super cheap solution for all of those bows. 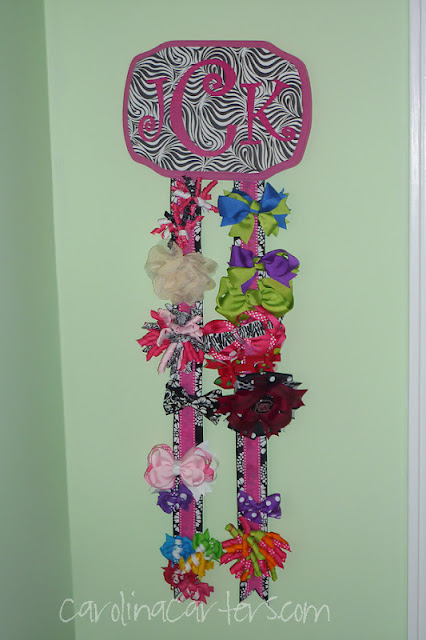 Next up, Derrick's big boy room!


When we first moved here Derrick slept in the room Jenny Kate is in.  We wanted to have a big boy room just for him before she was born so that he didn't feel like she was moving him out of his space.  We added the board and batten and painted the room navy.  I love the navy (Nautical Navy by Valspar) and white! 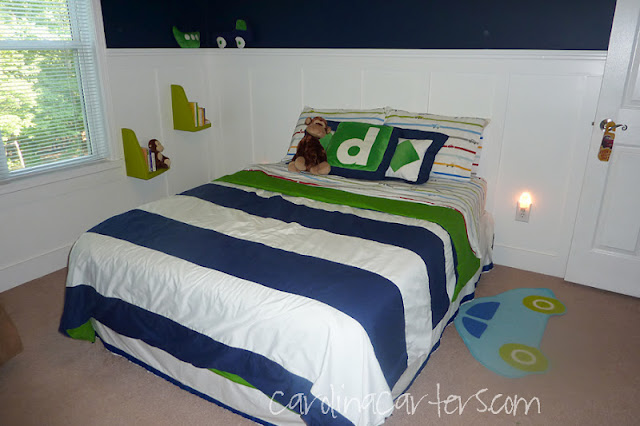 My friend, Ms. Pat, did all of the bedding, curtains, and pillows for both of their rooms.  I drew out what I wanted and she made it happen!  She's awesome, seriously!  I saw a comforter online that was similar to Derrick's but I couldn't justify spending $400 on JUST a comforter, especially for a then 2 year old!  So I had it made...for way, WAY cheaper!

This is the view from Derrick's bed.  We did all of the work on his walls before we came up with the brilliant idea for the built-in chest of drawers, so he has a freebie that we painted white and added green knobs to match the room.  Don't tell Justin, but I think we might have to do a built-in for Derrick too.  It saves SO MUCH space! 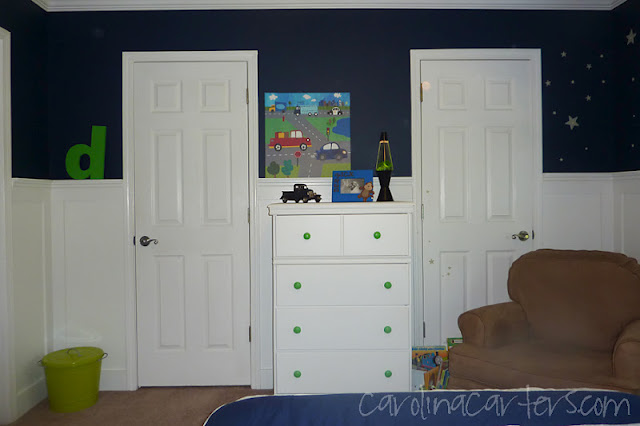 The top of his chest of drawers: a truck, a cute picture frame that my friend Steph made for D (before he was born and it's STILL empty, told you it was an issue), and my lava lamp from high school.  He loves the lava lamp!  We have to turn it on during nap time so he can "watch the bubbles." 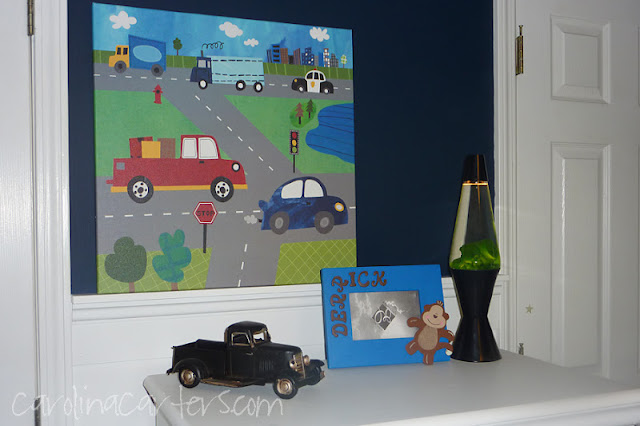 Here's D's bookshelf.  It holds his special animals, his marble collection from Nana, the Lightening McQueen lamp that must be turned on during all sleeping times, 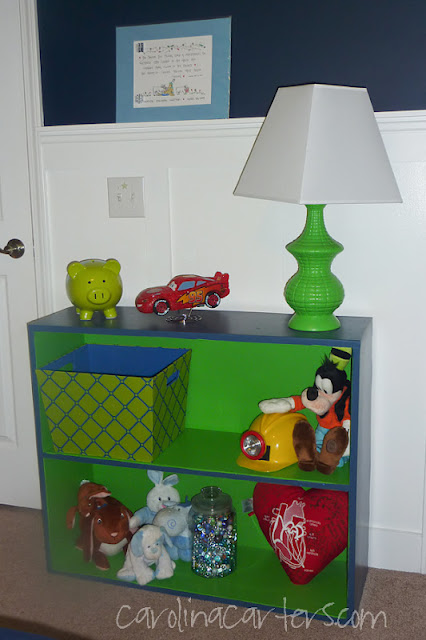 and his special heart pillow from his Glenn surgery. 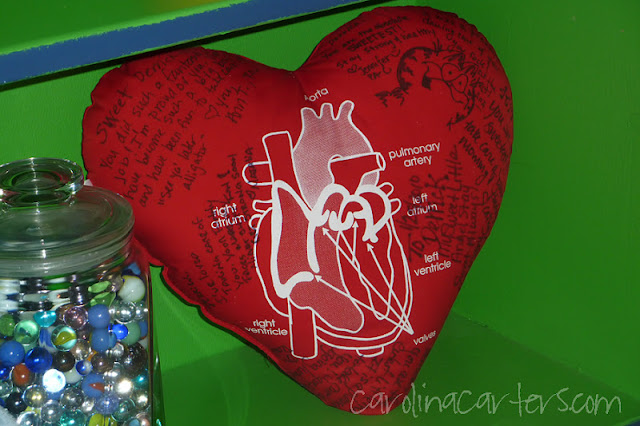 Above D's chair he has glow in the dark stars (which are kind of hard to find now) and his "I love you to the moon and back" sign that his cousin Lily gave him.  He told me one time that he wanted to be an astronaut, so we thought the stars were perfect.  :) 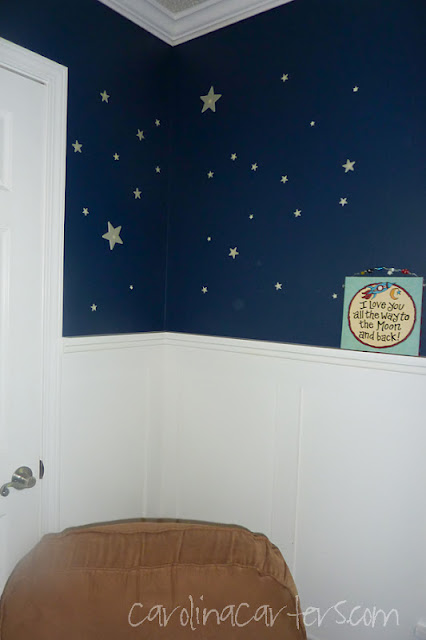 He has some little (Ikea) bookshelves to hold the little board books near his bed. 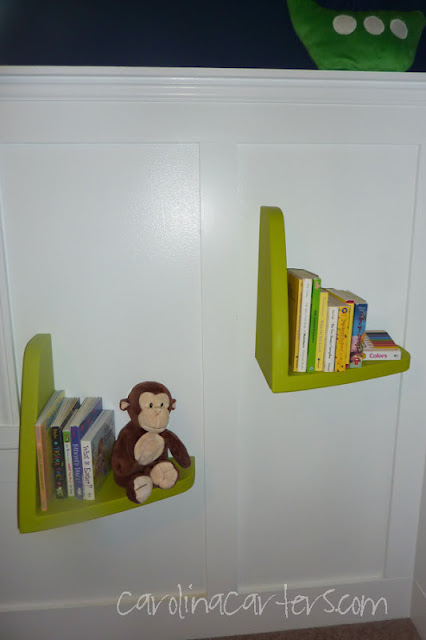 They rarely have books on them because this happens as soon as they do: 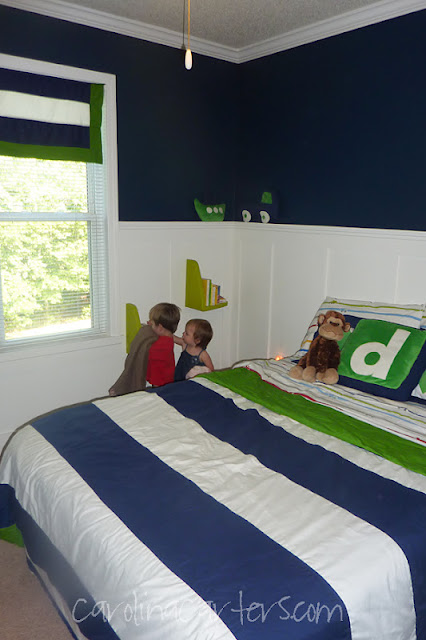 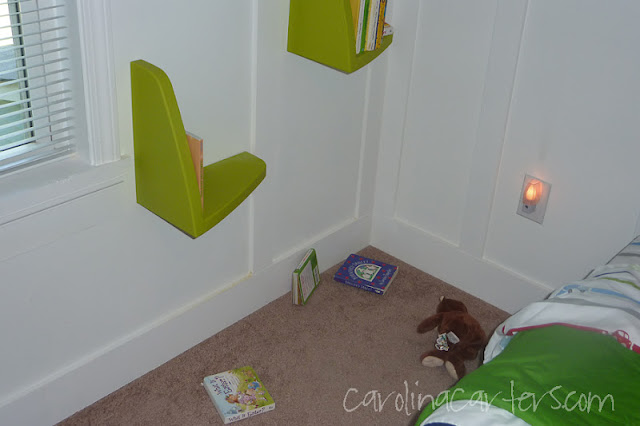 We had a lot of fun decorating their rooms and love them, but what we love most of all are the little people who live in them: 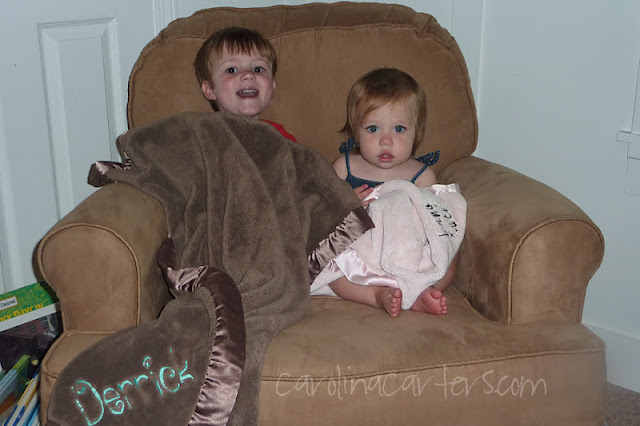 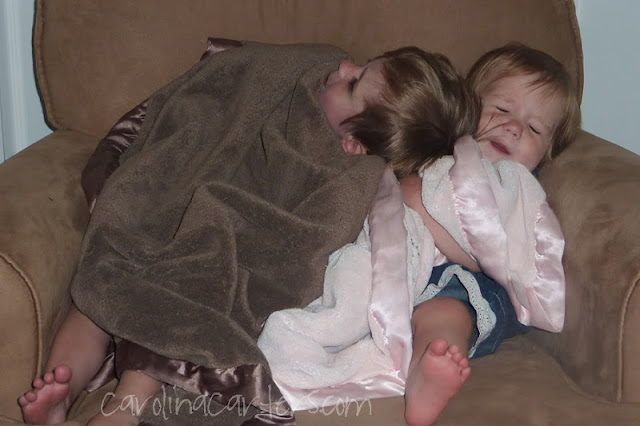 to pose for pictures, 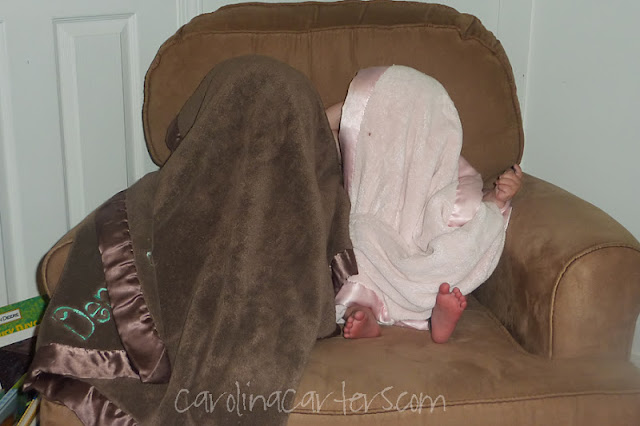 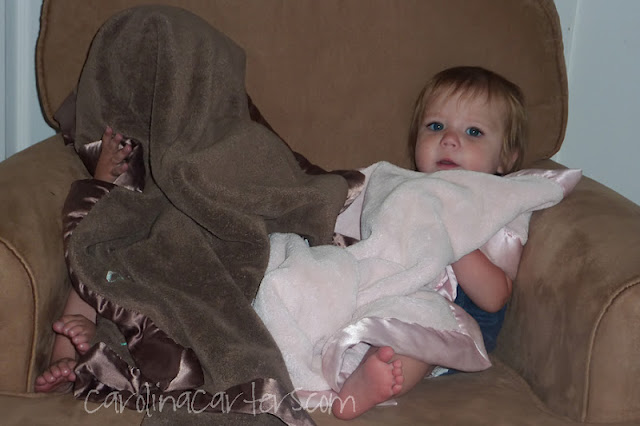 That's it!  Maybe this will motivate me to get a head board made for D's bed, pictures in frames, pics on the wall, and some other little stuff finished.  I'll write it on the list at least!