Well, not a swimmer that can totally be trusted, but he's getting there fast!  Oh, my baby is growing up.  He's so, SO proud of himself and we're so proud of him too!

Jenny Kate has taken quite a liking to the water too, so here she is doing her thing.  She loves going under.  She gets all excited when she knows it's coming.

They are loving the pool! 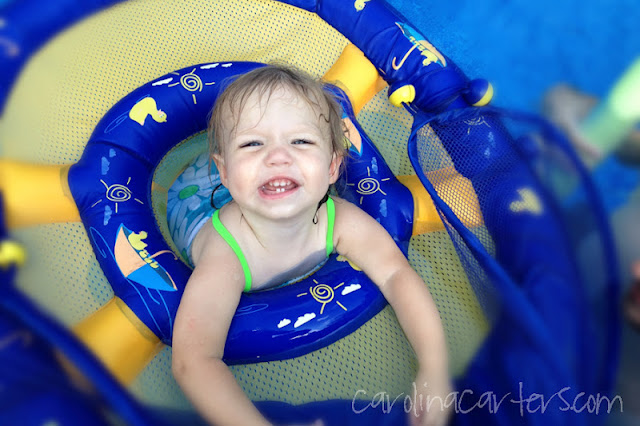 In case you're wondering about how our little stubborn girl is doing with her milk, as of about 3 days ago she decided she'd drink milk from a cup.  We just kept handing it to her and not making a big deal about it being milk.  I guess she figured out she wasn't going to win this one and gave in.  Thank goodness!  Thanks so much for all of your advice and support!  Y'all are the best!  :)  This parenting thing is HARD!  There are many days I'm not so sure I'm qualified!!

Well...it's been almost a MONTH since I updated here!  Whoa!  I've been meaning to and have about a gazillion pictures and posts that I need to do, but I honestly haven't felt like sitting down at the computer long enough to get one out.  I had three photo shoots in one week and editing those pretty much turned me off from the computer for a while.  I've been catching some flack about not posting, so I'm back from my little hiatus with a need for some advice.

We have a stubborn, strong-willed little girl.  We have known this since she was about 6 hours old when she completely refused to wake up to nurse despite four people trying to convince her that it was time.  (Which of course had me freaked out and insisting on a sat check, but anyway.)  As much as we hate to admit it, she's pretty much the shot-caller around here.

Right when Jenny Kate turned one, we decided to take away her bottle.  She absolutely refused to drink milk from any other vessel and we refused to offer her anything but milk in a cup.  I think we tried every cup on the market, including a regular drinking cup with a straw.  She refused.  She would open her mouth and let the milk roll right out as soon as she drank it.  She was a cranky mess and quickly started having way fewer wet diapers than normal, which had us pretty nervous.  She was clingy, fussy, and just plain miserable.  After about 3 days I came down with the stomach virus and since I was the only person she would calm down for, we gave in and gave her a bottle.  There was just no choice.  Seriously.  Once she saw that bottle she was a different child.  She laughed and squealed and played and didn't care at all that I wasn't going to hold her.

I'm sure giving her the bottle back was a big mistake, but for her health and our sanity, it had to be done.

Fast forward two months later and we've decided it's time.  Again.  Yesterday morning we excitedly gave Jenny Kate a sippy cup of milk.  A cup that she uses all the time.  I handed it to her and said, "Here's your milk!!  You're a big girl!"  She took one sip of it, opened her mouth and let it all roll out, then slammed the cup on the floor.

She's a rascal and she knows exactly what she's doing.  Here's how we know:

Yesterday Derrick was eating Skittles and JK wanted some.  I gave her half of one.  When she wanted more, I asked her to take a sip of milk and I'd give her more.  She took a sip of milk, I gave her the Skittle.  I convinced her to drink two sips of milk for another half of Skittle.  She did.  This game went on for about 10 sips of milk.  I stopped giving her skittles, she stopped drinking milk.  Refused.

So here's the dilemma.  She's drinking sips of milk a day.  Her wet diapers have significantly slowed down (she still has some, but not enough for me) and she's a whiny, cranky mess.  I've talked to her ped about it briefly but we haven't come up with any solutions.  It's been one of those laugh and shake your head kind of conversations.  Of course I can't let her dehydrate so I'm hoping someone out there has had this issue.  Tell me I'm not the only one with a child so stubborn that she'd rather dehydrate herself than give in to what we're asking!

And because I can't post without a picture, here's one that shows her personality exactly.  It's blurry because it was getting dark and I took it with my phone, but I love it too much not to have it saved somewhere! 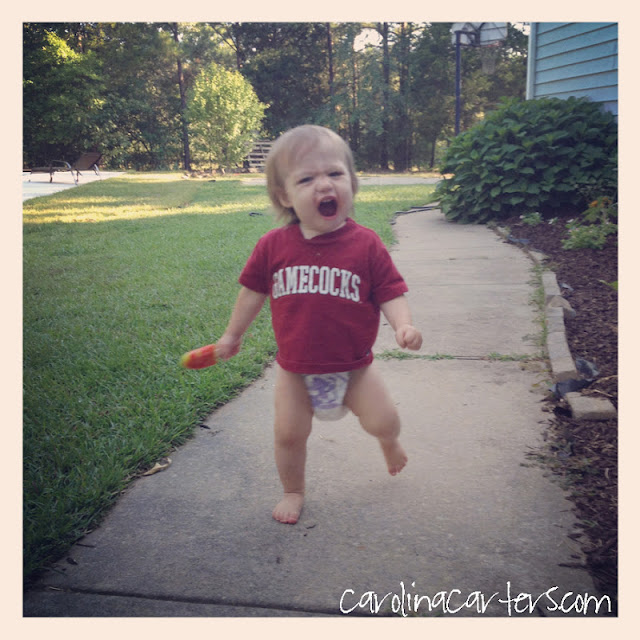 So tell me someone out there has some advice!  Pretty please, with chocolate milk on top?!