It's taken me over a week to write about it, but we did it.

I had two goals:
1.  finish
2.  not be the very last person crossing the finish line

I am insanely happy to say that both of those goals were met, although it didn't end quite like I had planned.

As we were driving in we passed this guy: 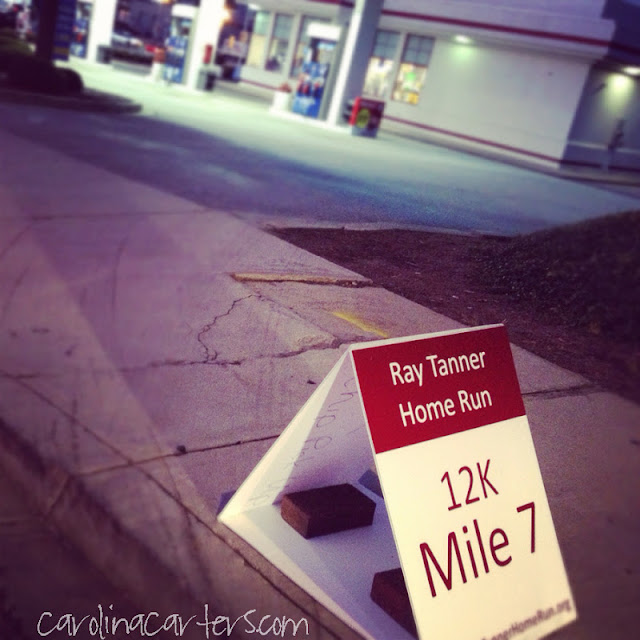 It made my stomach churn.

This "mile 7" marker made me nervous for lots of reasons, but the main one was that the most I'd ever done was 6 miles and it was NOT a good run!  The week before the run we did "easy" runs.  The four runs before the 12k were terrible for me.  I'd had (and still have) shin pain in my left leg like crazy, and as I was running the week before I could tell I was overcompensating somehow because as I would run my hip would hurt.  Three miles was the max for me and I was so scared I wasn't going to make it!

On the way to the race, Justin and I were talking about how crazy it was that we were on the way to a 7.45 mile run...that WE were running!  I mean, I couldn't run a quarter of a mile in May.  Clearly, God had carried us through the training and gotten us this far and we both wanted Him to be glorified as we ran that morning.  He had prepared our bodies for this and we were ready.

We have awesome running buddies.  This past summer my running buddy moved away, but God provided not only me with a new partner, but Justin with one as well.  Brad and Susan have been an answered prayer and they have pushed each of us farther than we anticipated.  Gently, which is nice.  :) 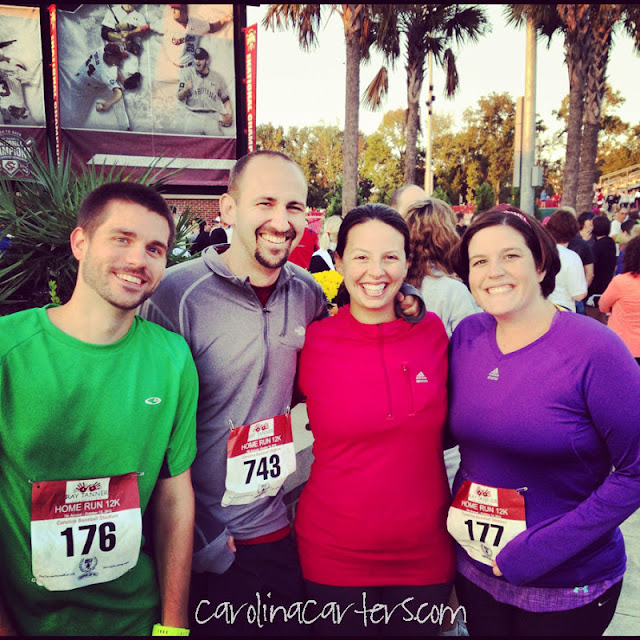 The race started, and like everyone promised, adrenaline carried me through a large portion of it.  I'm so thankful for our training on "Likas Hill" because I'm telling you what, downtown Columbia, SC is FULL of hills.  OMG!  There were several places where I was sure I could go no further.  Especially once we hit the 3/4 mile incline that I was pretty sure was never going to end.  But it did, finally, and it was downhill again.

The strangest thing happened to me as we were running.  As we hit around mile 6-6.5 we came to another BIG hill.  I remember looking at it and completely dreading it.  I remember Susan saying, "Ok, it's our last 'Likas Hill'."  We decided to push it up the hill to get through.  We were exhausted and going faster up a hill is sometimes easier, so faster we went.  I remember thinking to myself, "You're going really fast," but there wasn't anything I could do about it.  My body was running fast and I couldn't stop it.  Once I reached the top I felt dizzy.  There isn't a whole lot I remember about the last mile of the race.  I remember Susan encouraging me and her saying, "Oh, dizzy is not good." I vaguely remember passing that dreaded mile 7 marker, but that's about it.  I was in a dizzy fog the rest of the race.  There is no explanation of how I finished that race and didn't fall down, other than God carried me through it.

I have no memory of the most exciting part of the race.

I remember getting to the baseball stadium, but I do not remember running across that field and crossing home plate of the Carolina Gamecock baseball stadium, which makes me sad.  Thankfully, Justin snapped this picture as proof that I did indeed finish: 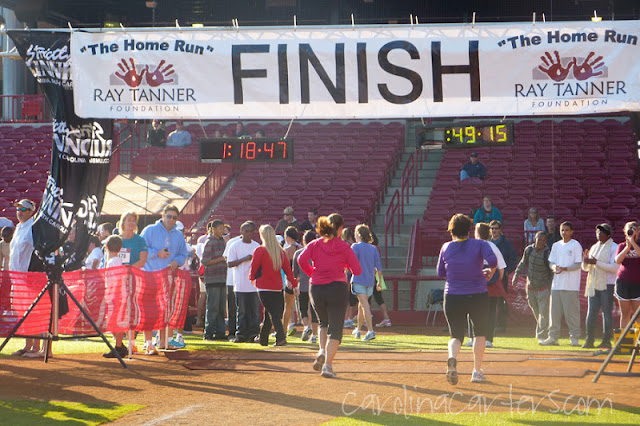 I am so bummed that I don't remember finishing the race.

All I remember is seeing a chair with a big bag in it and grabbing on to the chair.  I asked the guy (who ended up being the most useless paramedic ever) to move the bag so I could sit down.  Justin came over and said I was as white as a sheet.  When I run or get hot at all, I am super red-faced so he knew something was wrong.  Apparently I wasn't answering his questions at first, but he gave me some Gatorade and I started feeling better.  It was the craziest feeling ever.  It was like I was there but not.  I sat there for about 15 minutes and I was fine the rest of the day.  All we've come up with is that my blood sugar and/or blood pressure dropped and/or I got dehydrated.  I've been trying to drink more and I'm taking a multivitamin again to try to replenish anything I may have lost.  Hopefully that'll do the trick.  No worries!  If I still feel weird as I run again I'll get checked out!

After the race we had a super nutritious breakfast at the Waffle House.  I know, but chocolate chip pancakes were calling my name!

Justin's parents brought the kids to see us finish the race and they were pretty excited.  They have been training with us, after all.  :)  Derrick's only request was to stand on the pitcher's mound but he wouldn't do it alone.  Maybe we have a future baseball player? 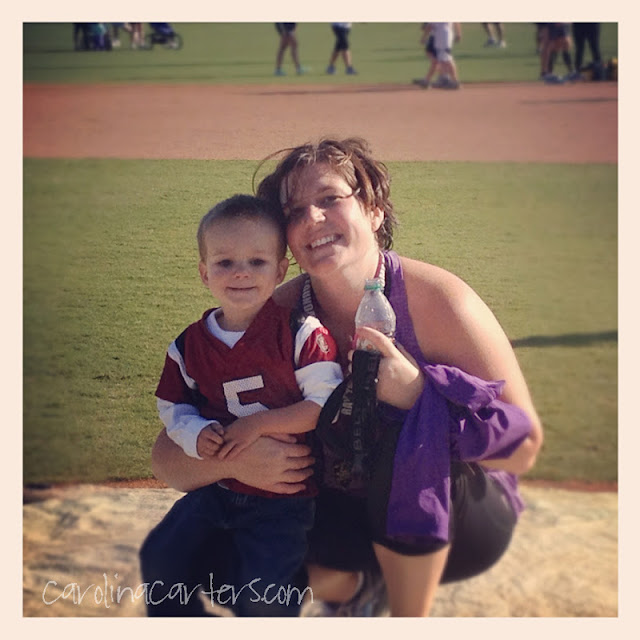 So we made it out alive and have the medals to prove it.  Woo hoo!  I'm so thankful that God has given us legs that can carry us and lungs that can feed us the oxygen we need to make it through...even though a lot of the time it doesn't feel that way.  It feels good to push, and I'm so thankful He is showing us that we are capable as long as it's with Him.  I'm telling you what...there is absolutely no other way I would have crossed that finish line! 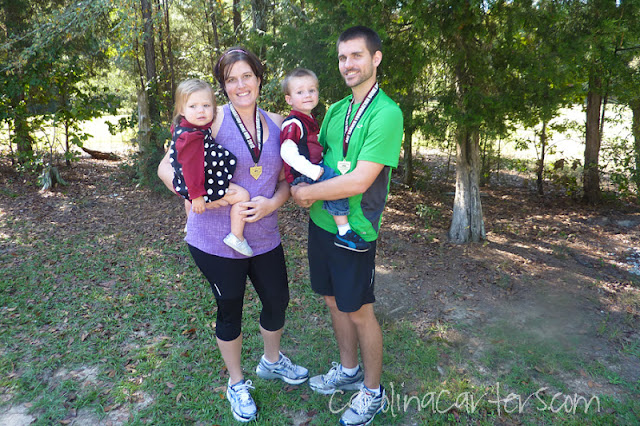 To God be the glory!