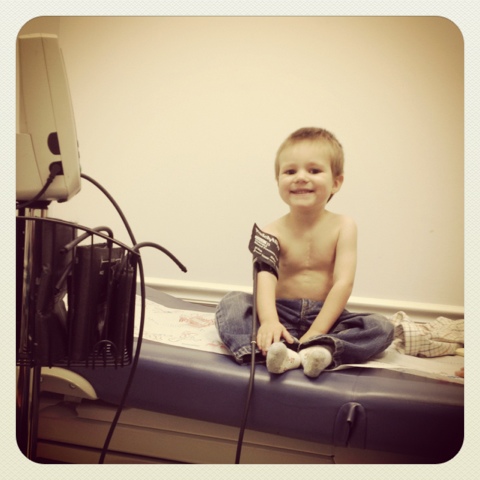 Today I am so very thankful for the advancements that have been made in modern medicine. I think about it every day, but today was one of those days that kept it at the forefront of my mind.

Derrick had his 3 month cardiologist follow up today.  The appointment went well and he was a super big boy.  He sat on the table by himself and had his blood pressure checked and let Dr. S listen to his heart. 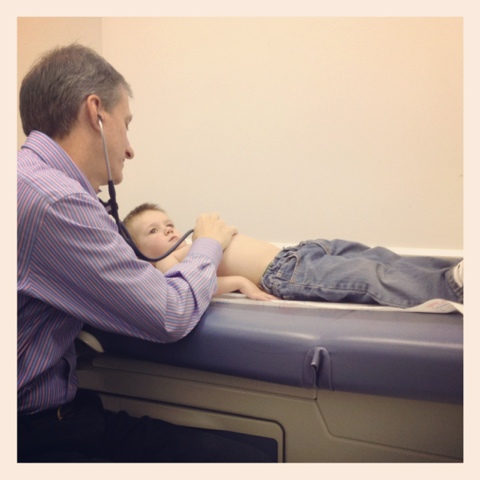 He helped put the stickers on for his EKG and daddy held his hand while he was on the table.  He was super still just like they asked. 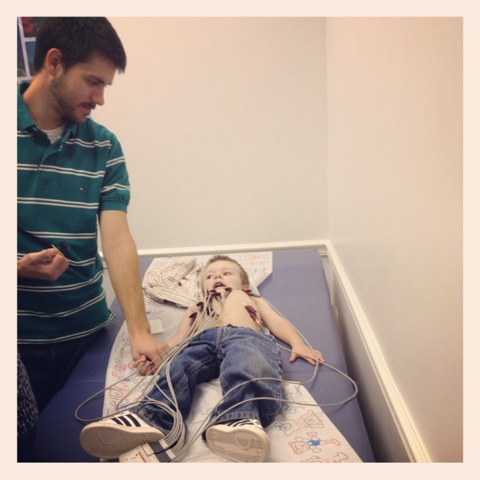 Overall, the appointment went well.  Derrick looked and sounded good, EKG was the same and there were no new murmurs.  His sats, however, have been slowly trending down and we had the big "S" talk again.  Dr. S told us today that he wanted to do Derrick's Fontan in May instead of waiting until the end of summer.  This caught us off guard a little since last time we were there we kind of had a choice and were planning to wait until the end of the summer.

So, in SIX months it will be time.

Honestly I'd rather it be earlier so he has the summer to recover and we don't have to worry about the germs of the fall.  I have to admit, though, that I had visions of a jam packed summer living it up before the big day.  I guess we'll have to do the hard part first and celebrate afterward.

I've been thinking about it all day and trying not to think about it all day.  Oh, my gosh I'm so not ready to do this again!  In thinking about being thankful today, I've thought about how grateful I am that Derrick was born when he was.  If he were born 25 years earlier he wouldn't have much of a fighting chance and for that I am so very thankful.  There is great hope for my boy and this surgery is going to make his quality of life so much better.  It's a GOOD thing, not a BAD thing.  I have to keep remembering that.

Here's the rest of our day in Instagram photos:

We went to Family Fun Day at the mall.  Jenny Kate jumped right in and was enthralled by the puppet show.  She isn't the least bit shy and I love that about her! 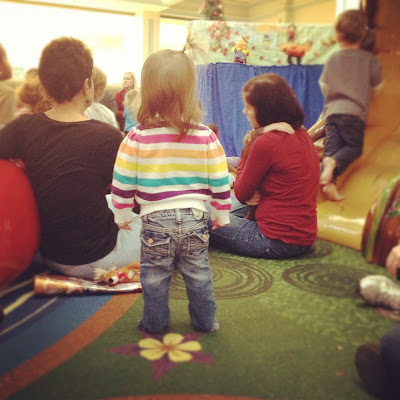 Derrick loved it too, but he stays close by.  And I love that about him.  :) 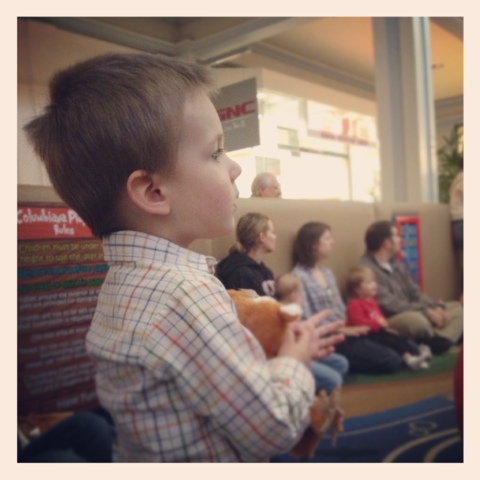 Derrick had one of his favorite foods for lunch, Japanese.  The boy loves some rice! 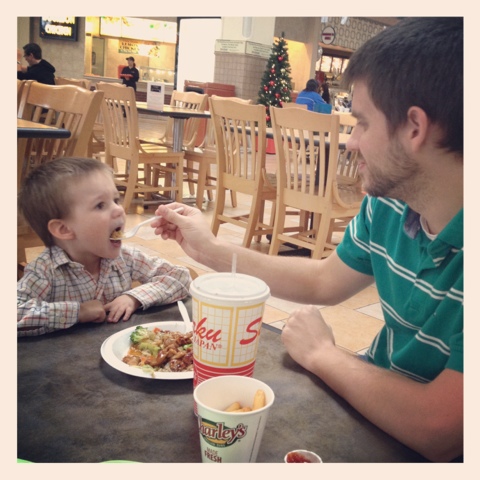 Jenny Kate had her favorite food too.  Ketchup. 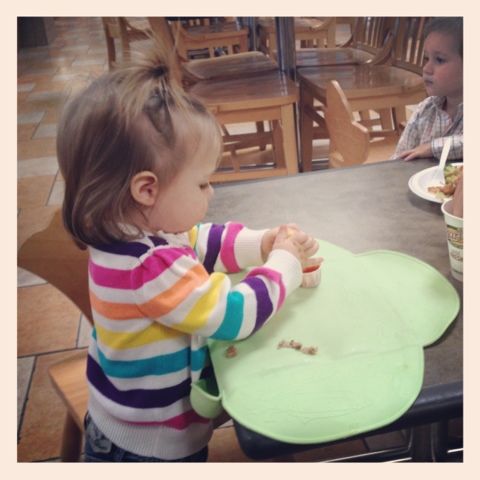 We had to play on some of the rides and this time when they started moving Derrick loved it.  This is a big step for us!  I guess it also means that we have to really put coins in from now on because just sitting in it isn't going to cut it now that he's not afraid.  :) 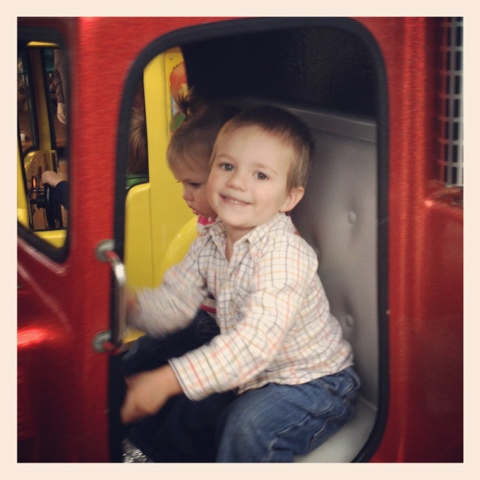 Jenny Kate liked it too, but she wasn't overly thrilled.  Her face was expressionless just like this the entire time D drove her in the cement truck. 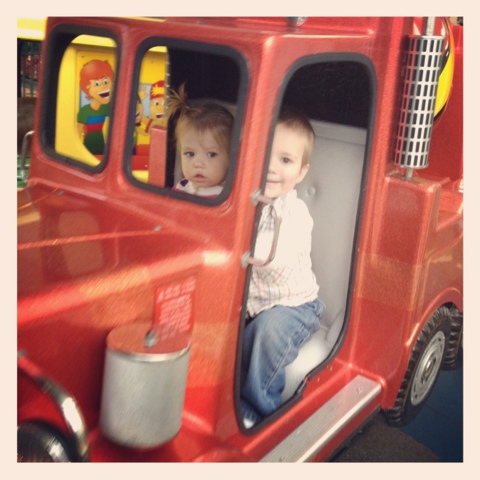 We promised Derrick he could get a gumball since he was such a big boy today.  Of course he chose blue.  He loves blue candy! 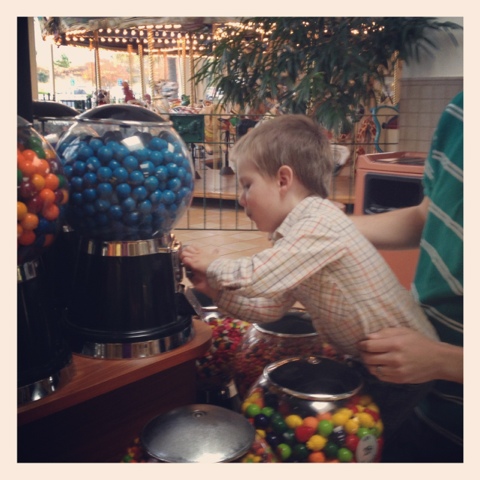 We stopped by the mall playground one more time before leaving.  Can you tell this girl loves her brother? 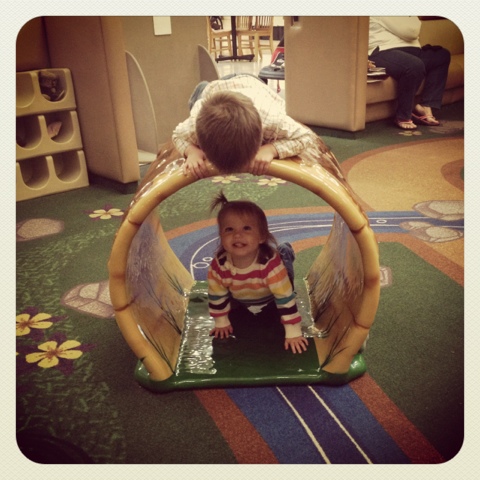 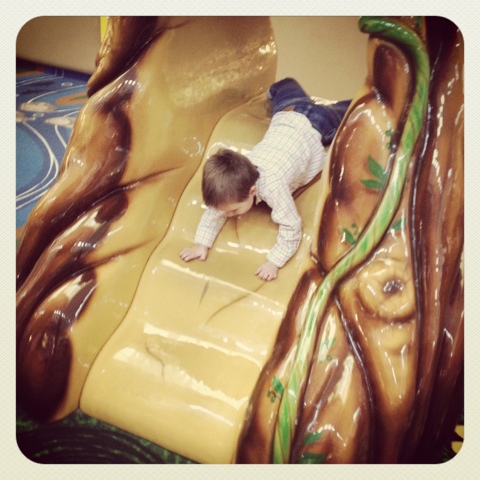 Overall I'd say it was a pretty good day!

On another note, my dad could really use some prayers.  He's been doing radiation 5 days a week for the last 6-ish weeks and he's had 2 chemo treatments.  He's been doing really well, but it's starting to catch up with him and his throat has gotten really, really sore.  So much that they gave him a couple of days off from radiation because it's burning his throat so much.  Obviously he can't eat anymore (he does have a peg tube so he can get calories), but it's even hard for him to swallow now and he really can't talk at all.  I sure would appreciate some prayers for him and I know he'd appreciate it too!  Thank you, friends!