There was one thing we knew when signing Derrick up for preschool, and that was that we would have to walk him inside every morning. His school does a carpool drop off but we were sure that Derrick would never ever be ok with being removed from our car by someone who wasn't his teacher. 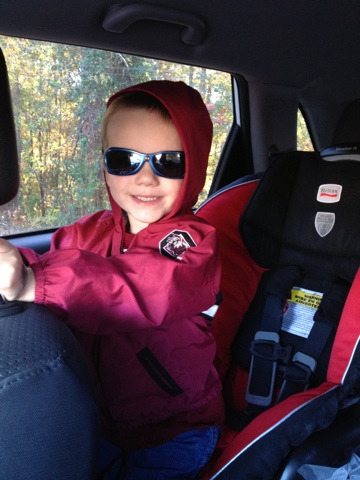 He's been telling us for a few days that he wanted to walk in school by himself like his friends.  (He also said that he wanted to "just do whatever my friends do," which might be a whole nother issue! :) This morning on the way to school I asked him if he wanted to go through carpool. "Yes, I want to walk through 'big room' by myself like my friends," he told me. We talked about how Jenny Kate and I would stay in the car and a teacher, probably not one of his teachers, would help him out of the car. He kept insisting that was what he wanted to do so we got into the carpool line. I unbuckled him as we waited in line and when the teacher opened his door he hopped right out with barely a wave goodbye. Today I am thankful that my clingy little boy has has developed more independence than I ever thought he would at this point. I was so proud of him as he hopped out of the car and walked up the steps with his book bag that's almost as big as he is. I have to admit though, this step tugged at my heart strings. Hard! I can't believe how much my boy has grown up these last few months!  It's bittersweet!