It's catch up time once again!  Someday I may catch up enough to do our Christmas post.  :)  Maybe!  Anyway, here's what we've been up to the past couple of weeks or so in iPhone pics.

Running...oh, how I loathe getting up at dark-thirty to run in the cold...which is why I haven't been doing it like I should.  (And boy can I tell!!)  For a little motivation to get us moving, Justin and I signed up for a last minute 5k to benefit the Ronald McDonald House in Columbia.  Y'all know how much we love the RMH.  It was insanely cold (for this southern girl, anyway) but it was nice to run again, especially with my hubby.  :) 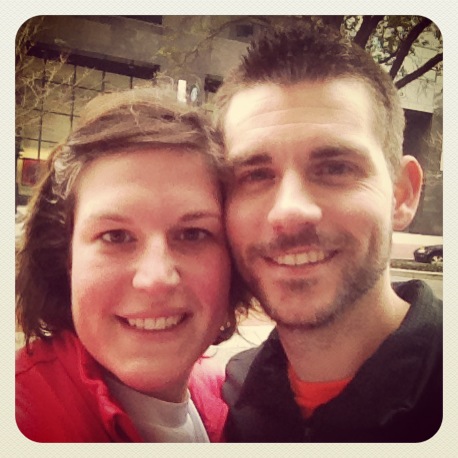 Since we had an early morning kid-less date, we decided to go to the Farmer's Market for a few staples:  eggs, cheese curds (omg I love cheese curds!), homemade bread and buns, and of course kettle corn!  The poor kettle corn guy was having some issues so we had to kill some time before that yummy, salty-sweet goodness was ready.  We found an adorable little coffee shop called Drip.  It was such a fun little place.  It's a good thing it's not close enough to swing by in my day-to-day life.  A mocha latte with a chocolate straw...out of this world!  It was way better than any Starbucks drink I've had.  And the little heart...love!   It was fun to sit and chat over coffee, looking out at the city streets.  I can't even remember the last time we did that! 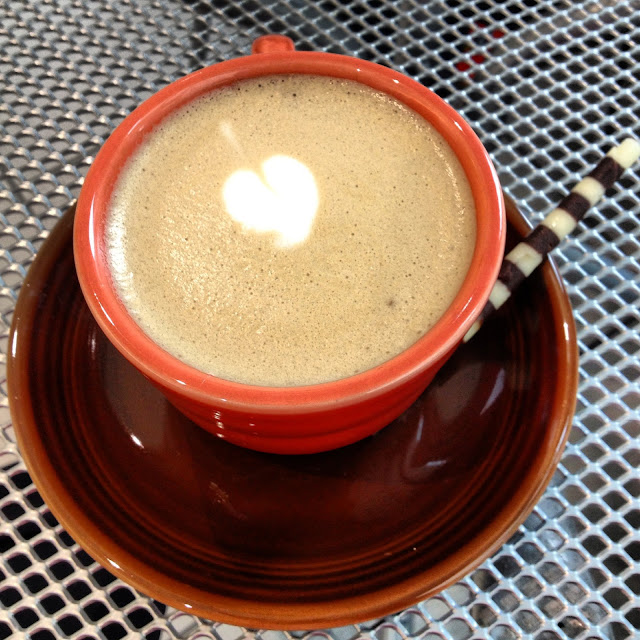 We went down to Charleston to take a batch of BraveHEART Baskets and to pick up a few Christmas baskets they had left over.  We finally smartened up and got totes with wheels to get the baskets in and out of the hospital.  We usually cause a scene walking those halls juggling huge totes, baskets, a stroller and two children.  This time it was much better!

Derrick is a huge fan of the wheels! 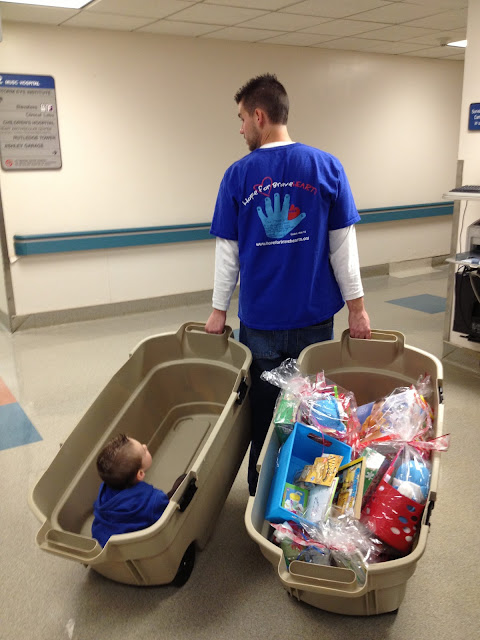 Since it was chilly, we had to figure out something fun to do with the kids indoors.  Derrick has been asking to go to Chuck E. Cheese for a while, so we thought we'd check out Mr. Cheese's digs in Charleston.  It was awesome!  There were approximately 4 other people in the building.  Score! 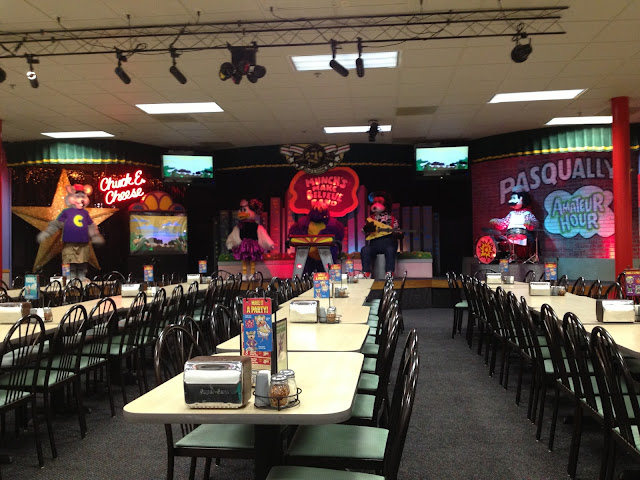 The games were a huge hit! 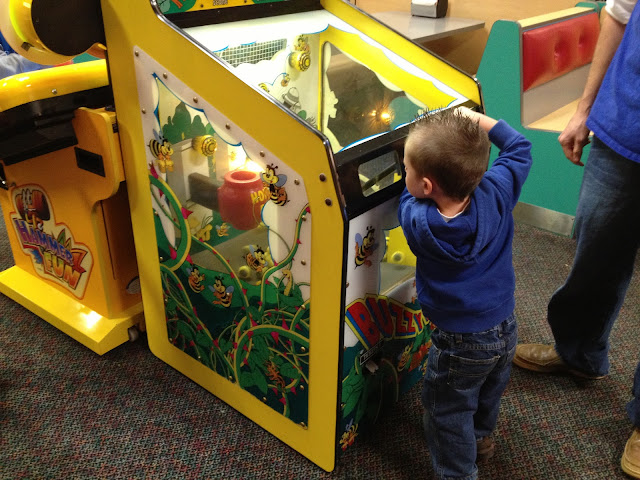 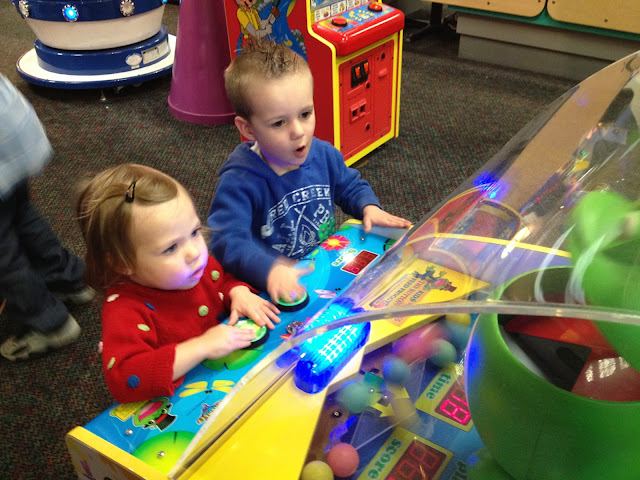 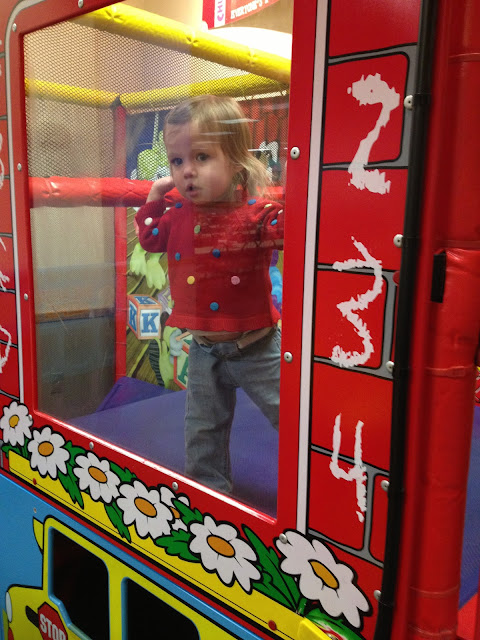 Jenny Kate's favorite thing to do was to put the tokens in the machines.  She would have happily fed machines all afternoon. 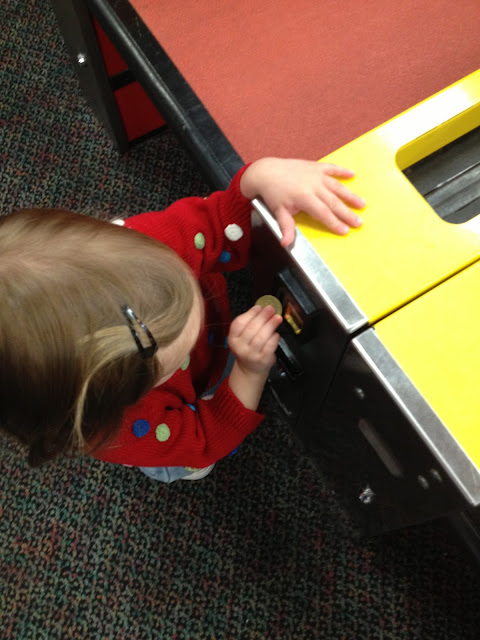 She did get a little worn out, though.  She looks like a hot mess here! Ha!  She now refuses to keep a bow in or shoes on.  We had to just go without the socks after putting them on over and over each time we got out of the car.  And her pants are too big.  Poor girl! :) 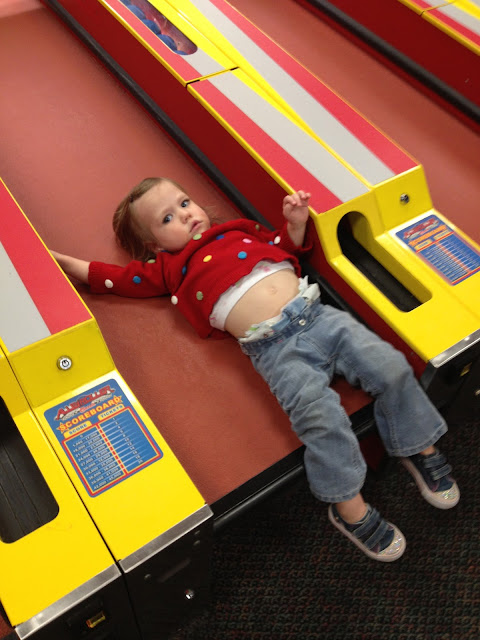 Right as we were leaving the man himself came out.  There were a few kids there and they were all scared...but not our boy! :) 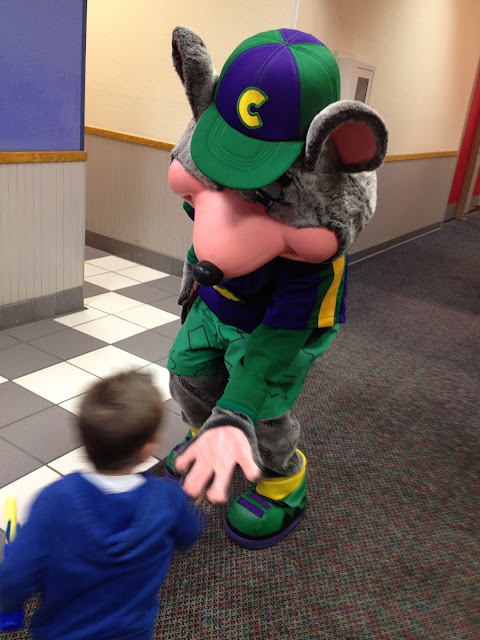 The other day when we were walking out of church, this is what our babies did.  The whole way to the car.  Not a great picture but a precious moment.  I love how they love each other.  (Although they already love to fight, too!) 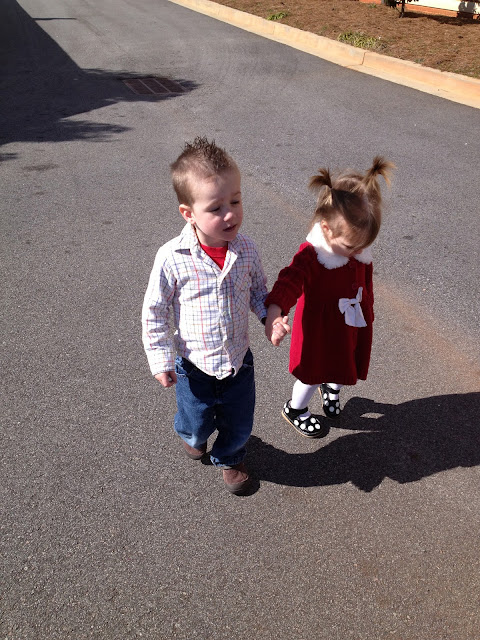 A couple of quick pics from "Wear Red Day." 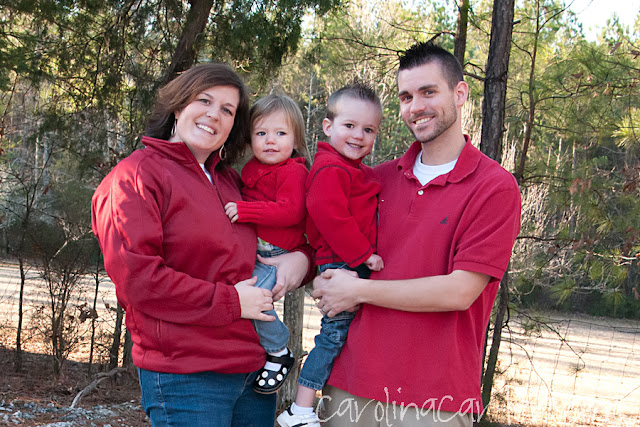 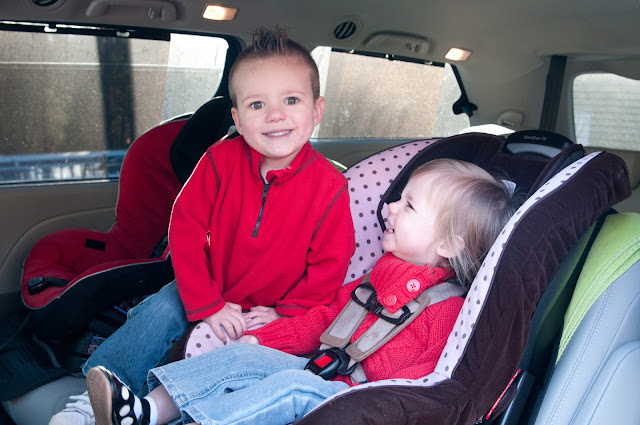 That day after preschool JK and I picked D up and headed across town to Krispy Kreme.  (Joye, I saw the heart doughnuts on your FB page and couldn't pass it up!) We even managed to save a few to drop off to Justin and his crew at work. 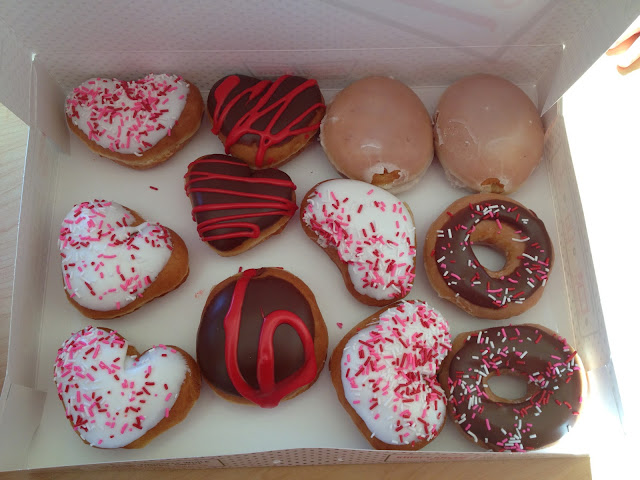 Derrick picked out our festive assortment, but I had to add in the two lemon filled ones.  OMG I love a fresh, lemon filled KK!

Everyone was happy with their doughnuts. :) 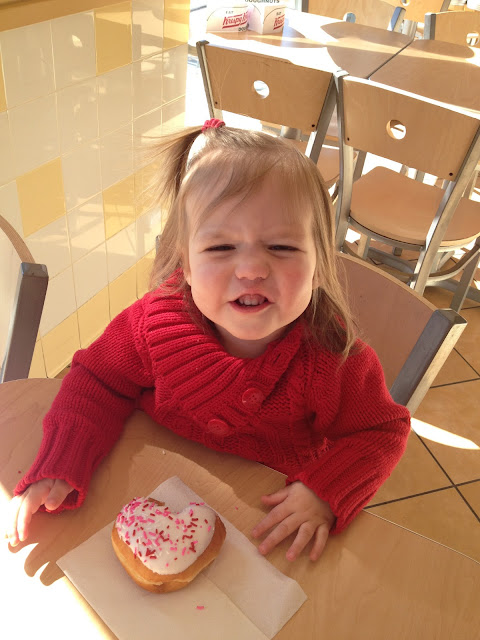 This boy shocked. me.  He ate TWO doughnuts.  Two.  While I know that is a very, very simple task for most of us, we're talking about a boy who usually nibbles the icing off and calls it finished. 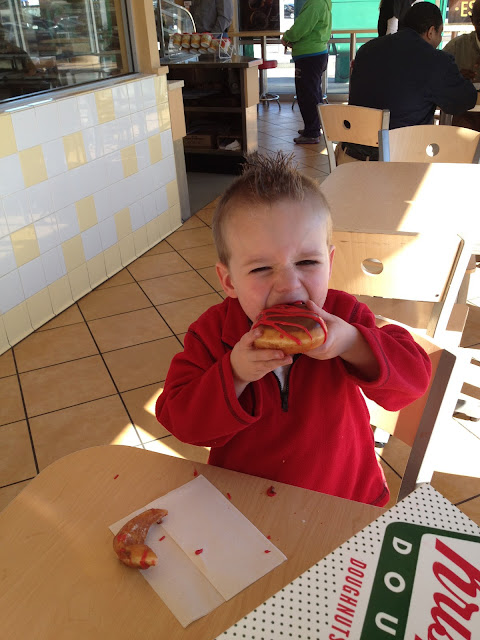 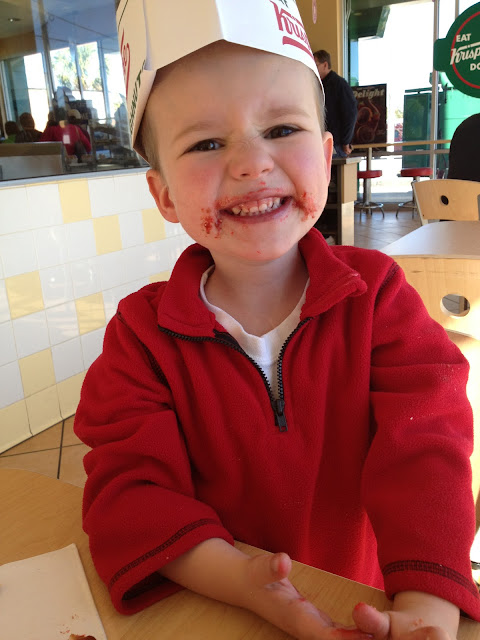 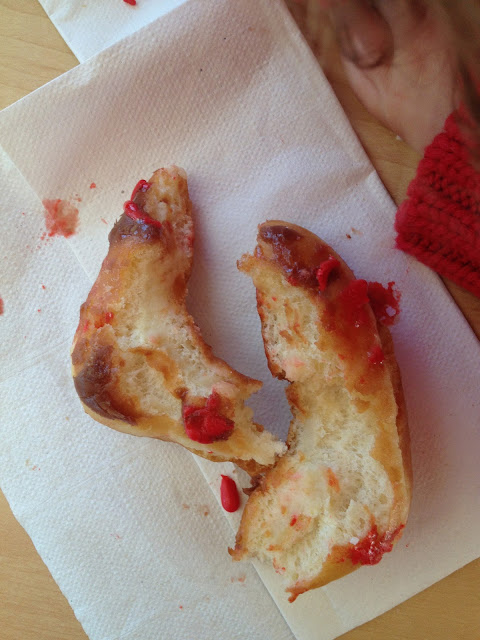 I want to give a huge "Thank you!!" to our friends and family who wore red in honor of Derrick.  Every time someone told me they were going to or sent me a picture of themselves/kids in red, it made me tear up a little.  You have no idea how much that means to us!


In other news, we have a new nap time dilemma.  Here's how I found them during nap time a few days ago. 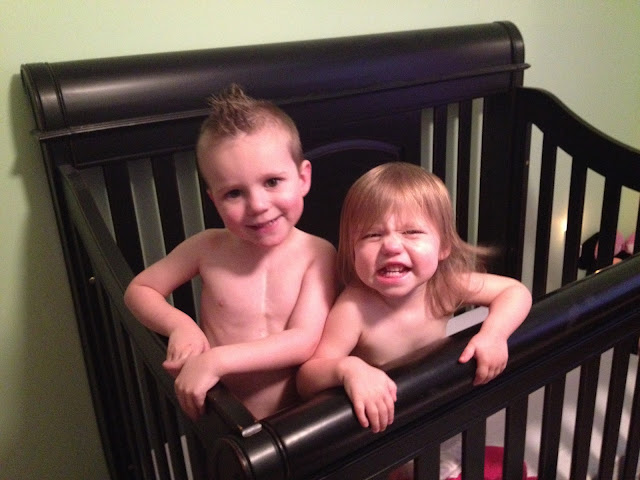 Sometimes JK cries when I put her down.  Being the awesome big brother he is, D goes in to the rescue.  He pulls her vanity bench up to the crib and makes himself cozy.  It's so funny to listen to them over the monitor.  This particular day he decided that he wanted to sleep with no shirt. Apparently when she saw this she, like usual, had to be just like Bubba.


We have a fun little trip coming up soon and the wetsuit D used this summer just wasn't cutting it. Here he is in his new suit.  He looks just like a little surfer, right?  He took it for a test swim in the bathtub and said it was perfect.  It's a little big but hopefully it will work out fine and last us more than one year this time! 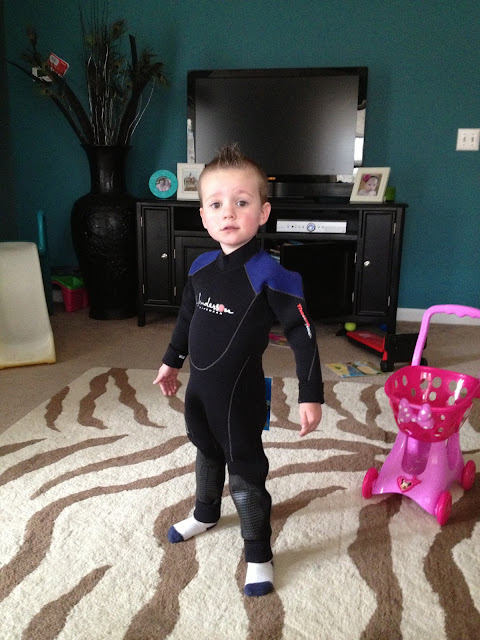 Derrick had a terrible double ear infection (that he never once complained about), and two antibiotics later he finally got the all clear.  Yay for some time without antibiotics OR breathing treatments.  Woot woot!!  This pic from Dr. B's office was just too cute not to share. 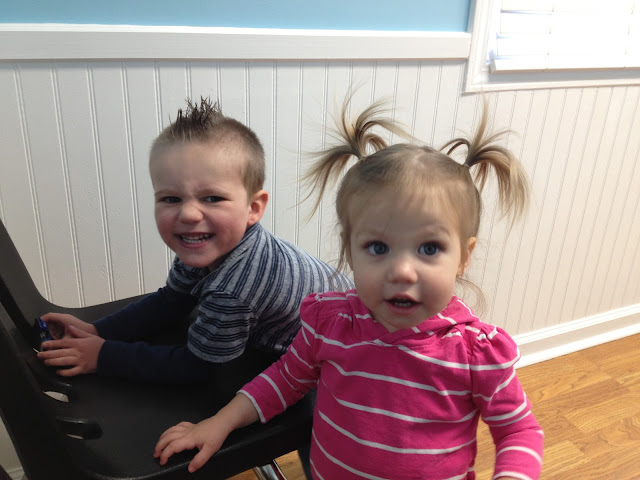 Our breakfast last Saturday was AWESOME!  A huge thank you to all who came out and supported Hope for BraveHEARTS!  It was the best one yet, bringing in a grand total (after paying the bill) of $5,296!!  We were over the moon!  Thank you, friends! :) 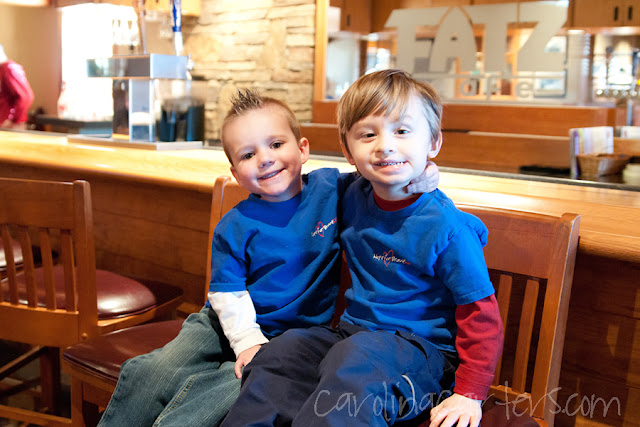 D and his little heart buddy, Parker.  Love these boys!!

Wow, that was long!  Anybody make it through all that?