A Really Cool Honor and a Cath Date

Several months ago our friend Courtney took a picture of Derrick for a competition among high school students called "The Art of Healing."  Students chose different media to show their interpretation of "The Art of Healing."  When Courtney asked if Derrick could be her subject we were honored, and we were super excited when she told us a few weeks later that her photo won the competition for her school! 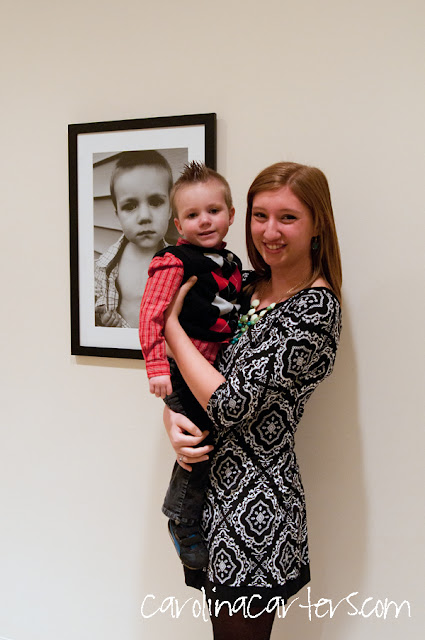 I know, he looks thrilled.  Ha!


Each school's winning artwork was displayed in the Columbia Museum of Art for a month (how cool is that?!).  Not only was their work displayed, but there was also another contest for the winning work.  Courtney invited us to the reception at the museum and we were excited to see her photo hanging in the gallery with the other amazing artwork created by other teenagers.  It was mind blowing to see some of the creativity there. 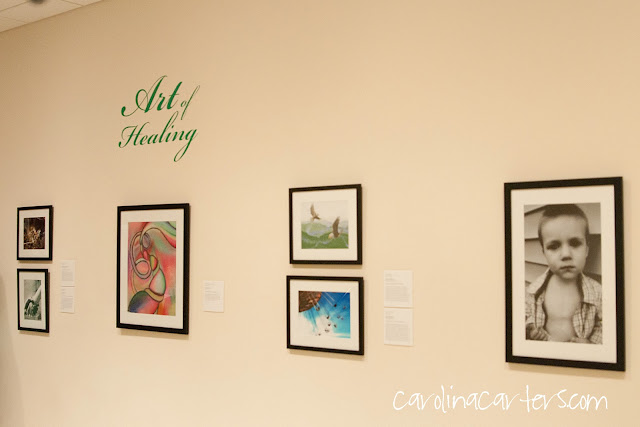 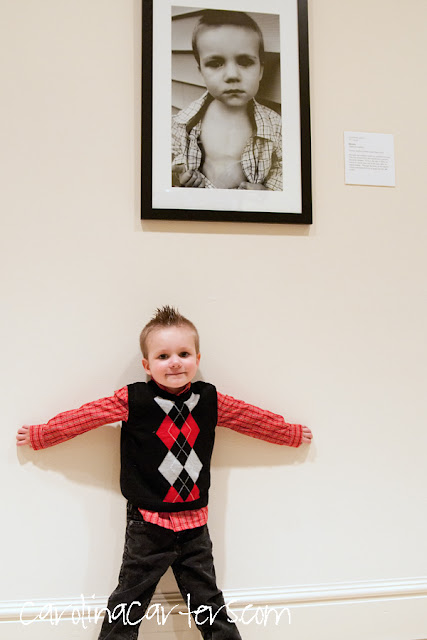 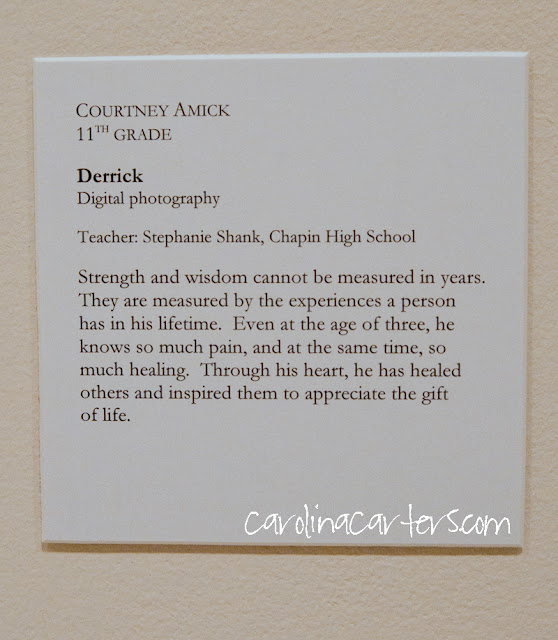 I can't read this without tearing up!

After the reception there was an awards ceremony.  How interesting it was to try to keep Jenny Kate quite for this! :)  They called out each of the winners until there was only one left: first place.  As soon as they started reading the description Courtney whispered, "That's mine!"  Derrick's picture popped up on the screen and they called her name.  She WON! 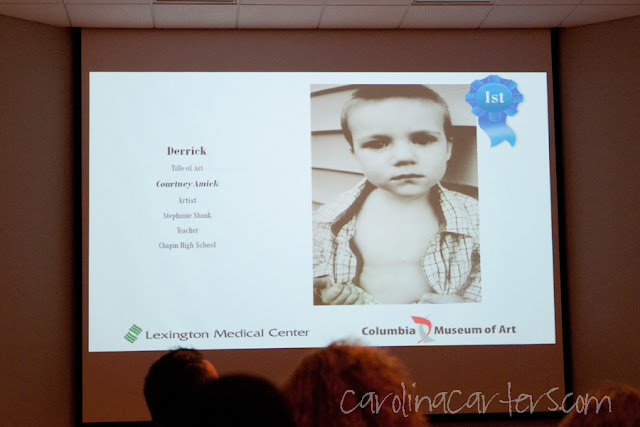 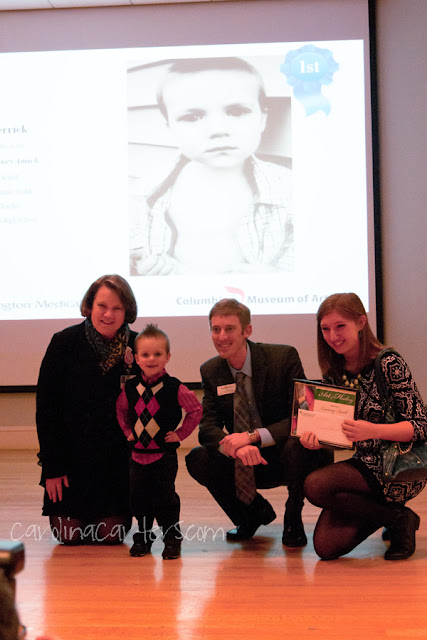 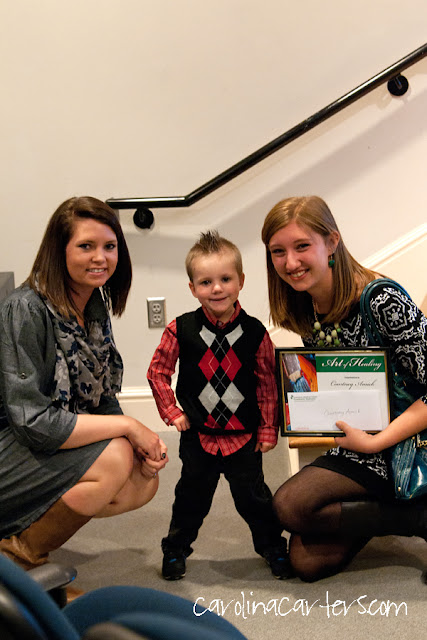 Derrick, Courtney, and her photography teacher


Courtney, we are so proud of you and honored that you chose Derrick to represent "Healing."  It's a flood of mixed emotions that our three year old can depict healing, because sometimes, that just doesn't seem fair.  We are humbled that you think of him as inspiring.  Of course to us he is, but for others to see that too, that is a wonderful feeling.  By choosing Derrick you also helped spread awareness for CHDs, which I'm sure you were unaware of.  Now each of those thousands of people who get a glimpse of his silver scar peeking out from his shirt will realize that special little hearts are real.  Maybe they'll see those big, serious, wiser-than-they-should-be eyes of a little boy and think about how much our kids have to go through to simply live.  Maybe they'll realize that just because they don't look sick on the outside doesn't mean they aren't really, really sick on the inside.  We thank you for honoring Derrick and all of the other children who have and have had special hearts.  Thank you.  And thank you too, for donating your prize money to Hope for BraveHEARTS.  You are awesome and we love you! 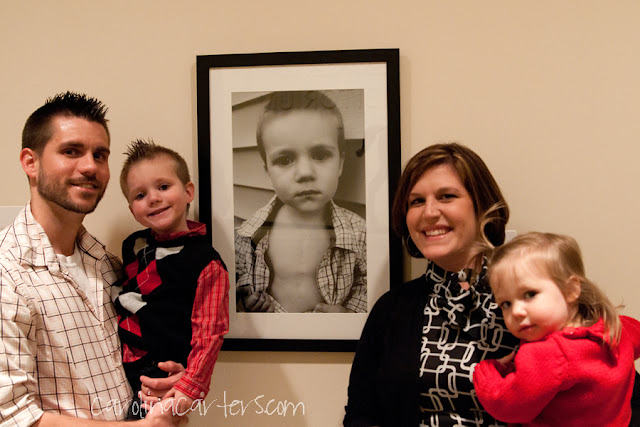 We got the call for a cath date.  May 7th is the big day.  The paperwork came in the mail to make it official.  There's something about seeing it in print that makes it all too real.  I knew as soon as I saw the cute MUSC Children's Hospital logo on the envelope exactly what it was.


We're ready to get it over with but so not ready for it to come.  We've known for the past four years this was coming, but I don't think there's ever any way to be ready.  Guess it's a good thing there's not an option, huh?

We're having fun until then and just got home from our last little get-away before surgery.  It was a BLAST and I can't wait to share the pics! :) 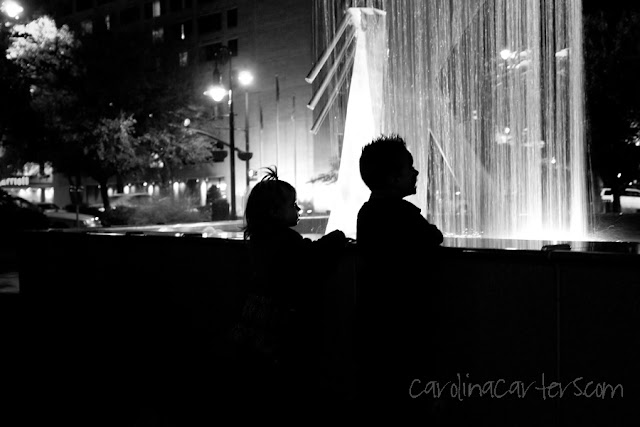 Of course we had to stop at the fountain outside. the museum.
I loved this one.  :)