As usual, time is flying by.  Ever since he turned 4, this boy has seemed SO grown up! 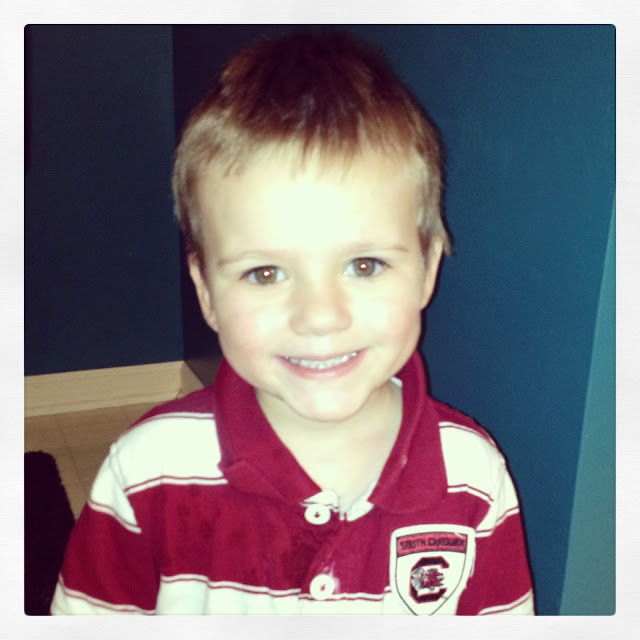 Since we got bumped, Derrick had to go in for a cardiologist visit.  We had fun playing in the waiting room. 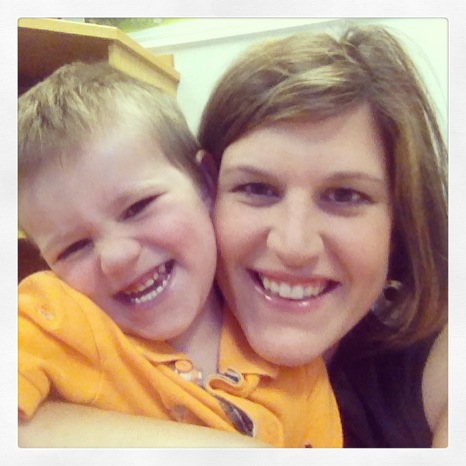 Derrick isn't a bit nervous about these visits anymore.  Actually, he seems to kind of enjoy them.  Crazy kid! 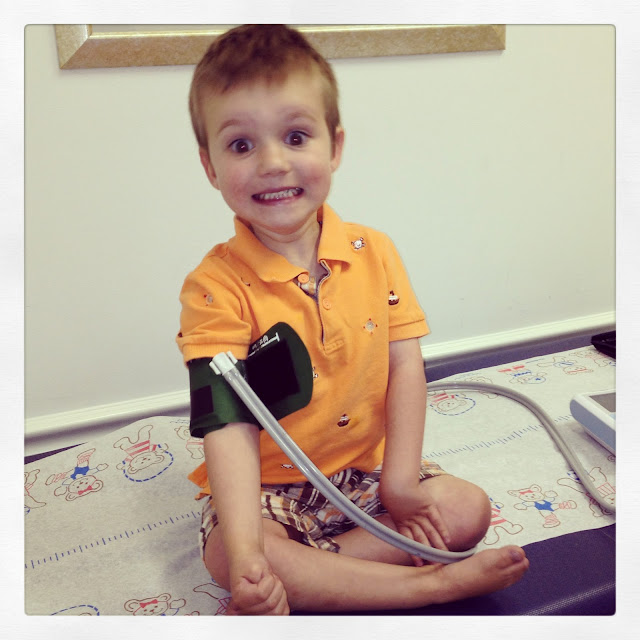 He got a "Have a great summer, we'll see you after surgery," from Dr. S and we were out the door.  But, BUT....he's grown a whopping TWO INCHES since we were there in February.  The nurse measured him twice just to double check.  Yep.  That's insane growth for Derrick!  Thank you 350 calorie Pediasure!

On the way home we stopped by the strawberry stand.  Gosh I love this time of year!  We haven't found time to go pick fresh strawberries ourselves but by golly when they pick those super sweet juicy strawberries for you...well, I couldn't pass them up.  And when they're picked ripe like that they make amazing chocolate covered strawberries!  I think that's my all time favorite dessert.  Ripe strawberries and milk chocolate just can't be beat.  I bought a gallon Thursday and another two gallons today.  Yummo! 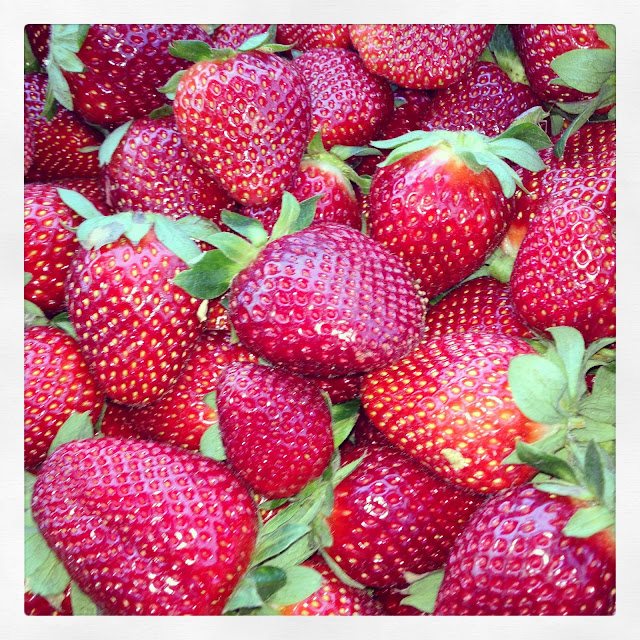 Last week at preschool, D's class had "Washing Day."  They had been reading Mrs. McNosh Washes Her Wash and got to wash and have water play.  They all had a great time! 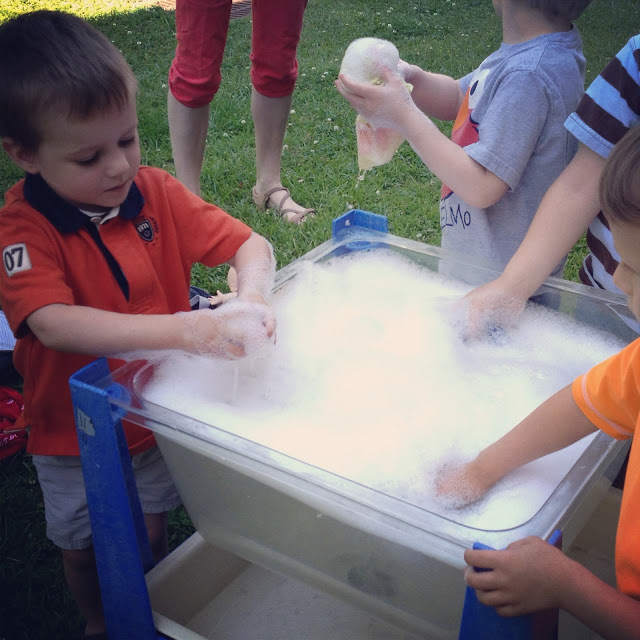 They also got to play with shaving cream and some slime that they made.  Messy fun is the best! 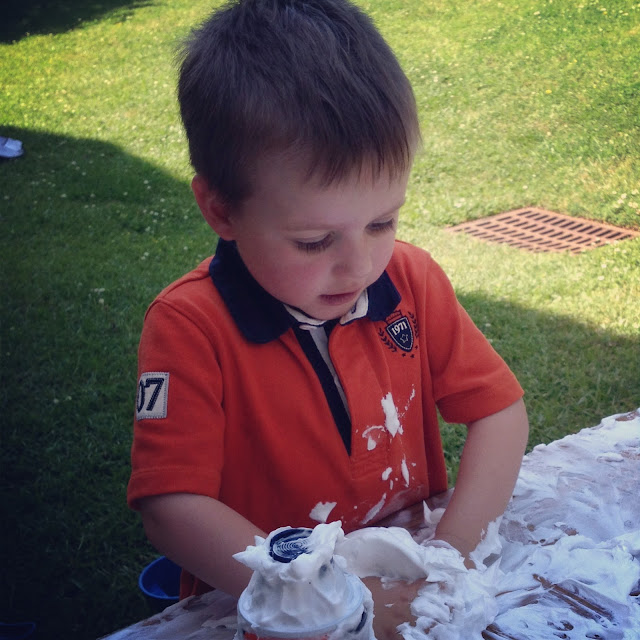 Mrs. McNosh washes everything (including her mail!) and hangs it all out to dry. 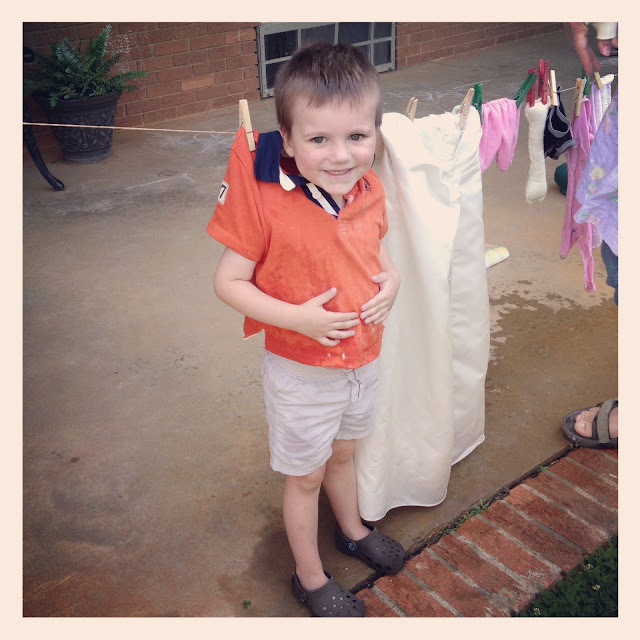 In other news, we've actually gotten a Spring this year, which is quite unusual for us.  We've enjoyed playing outside as much as possible.  Some of us are a bit more safety conscious than others. 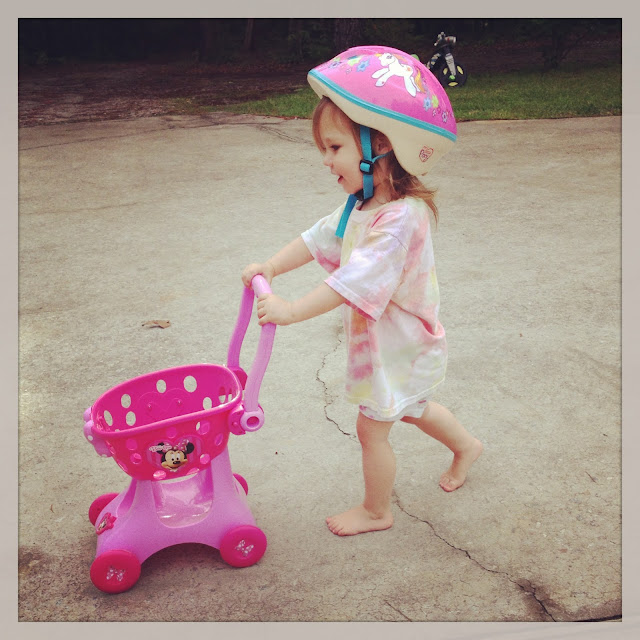 Most days when it's time for nap Derrick tries to convince me that he can just rest in his room because he's not tired.  Some days I let him stay up, but by about 6pm he starts melting down.  He wants to be ready to no longer nap but most days he can't handle it.  To be honest, I'm not ready for it yet either!  On this particular day he wanted to sit outside his room and wait until I said it was ok for him to come downstairs.  I went up to find this right outside his door.  :)  He tried so hard! 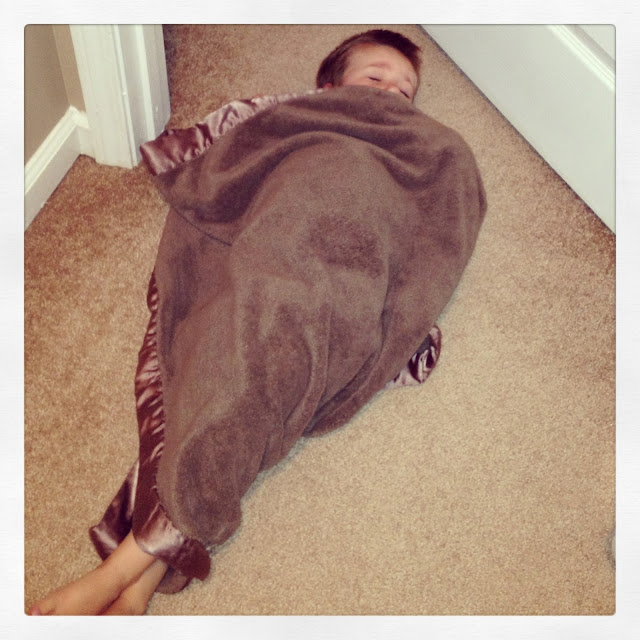 Justin's work raises money for the Children's Miracle Network.  Each store sets a goal and his store was falling behind.  He decided to step it up a little and made a deal with his customers that if he could collect $200 in the next two weeks that he would shave his head.  In two days they had donated over $300, so guess what? 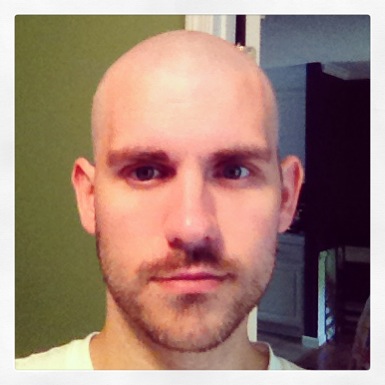 Ha!!  This was the day he shaved it.  It's been a week and it's already grown out a good bit.  Thank goodness!  We have family pictures this week. :)

My silly girl is always into something. 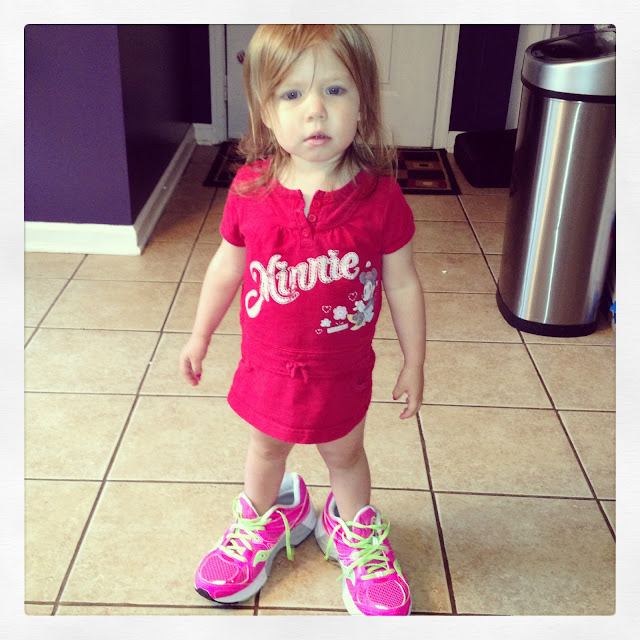 We went to Charleston yesterday to deliver BraveHEART Baskets.  We did some shopping, and as a reward, the kids got to go on a ride.  They don't fall for our tricks anymore and we actually have to put money in the machines now. 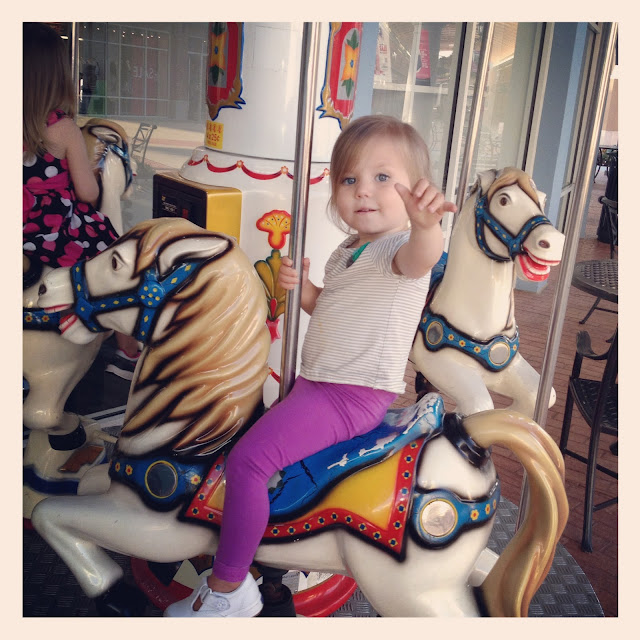 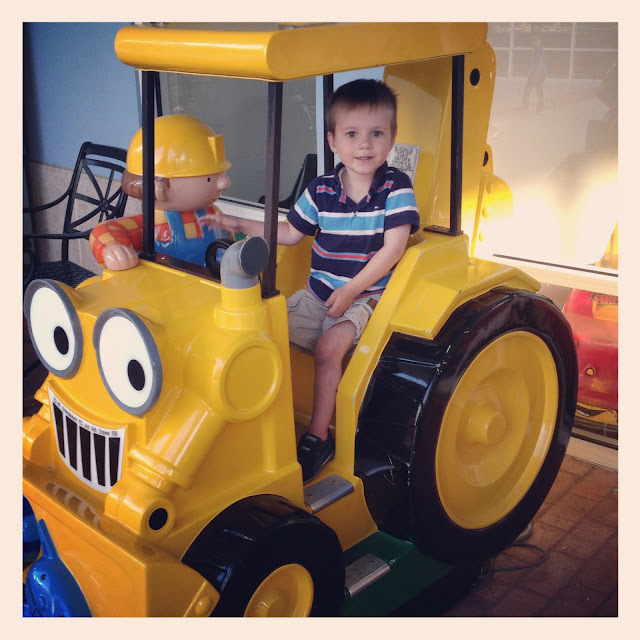 They are both obsessed with fountains right now and would stand and throw coins in all day long if we'd let them.  They also think it's ok to try to get coins out and we were constantly having to pull them away from the water.  Jenny Kate calls coins "kick kicks."  We have no idea where that came from.  She speaks in complete sentences and can say anything she wants to, but she likes to find "kick kicks" to throw in water or her piggy bank.   I don't know. 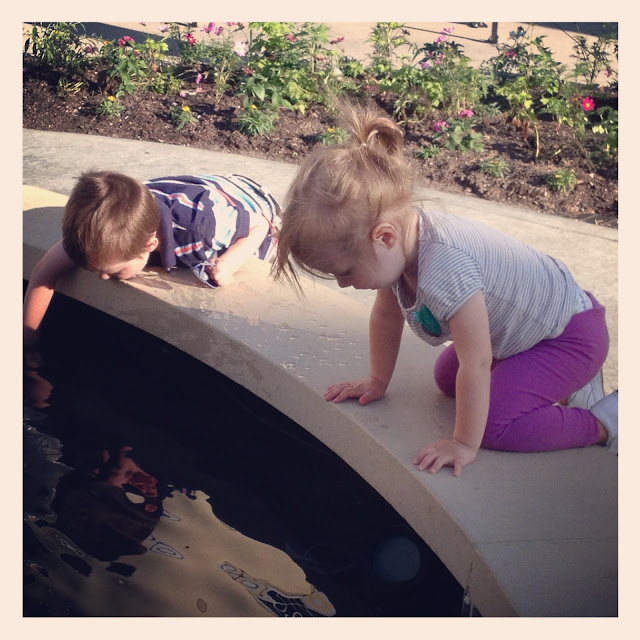 We {finally!!} got a Trader Joe's within driving distance and I'm ecstatic!  That place makes me happy.  Today I took both kids and I wasn't sure how that was going to go since I knew they didn't have "buggy cars."  Low and behold when we walked in we discovered they have the mini buggies, which is even better in Derrick's eyes.  I knew it would be chaotic but I gave it a chance. I'm pretty sure we were the entertainment of the day for everyone there.  It was crazy, but we survived.  They kept trading items in their carts and I found several things I wasn't planning to buy in there too.  It was fun but boy was I glad when we were finished.  Who needs the gym when you have little people to chase around the store! 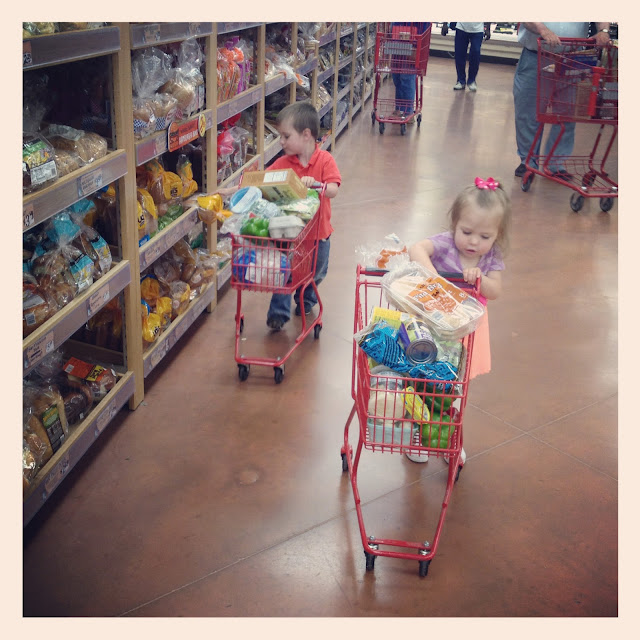 Other than that we're just hanging out, counting down the days until our girl turns TWO!  How can that possibly be?! 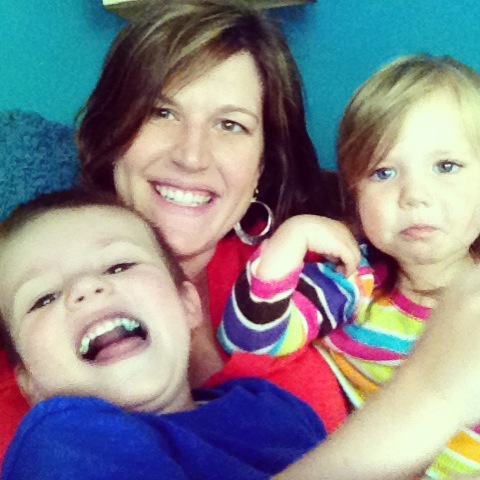