Chasing Rainbows and Other Randomness

I was going through my phone pics and decided it was time for a photo dump.  A few things that were randomly on my phone that I don't want to forget...

I was asked to speak at one of our local electric co-op meetings several weeks ago.  Have I ever mentioned I'm not a public speaker?  At all?  But I did it because I love and believe in Hope for BraveHEARTS.  They were very kind (and generous!) and I made it through without sobbing, so I took it as a win.

It poured down rain as we were getting there and on the way home we saw the most beautiful rainbow.  I really wanted the kids to see it, so we chased it.  There were points on the road where it was so vivid but Derrick never could catch a glimpse.  We finally made it to a gas station where I got him out to look at it and we caught the last little bit of it fading away.  He never really did see it, so we came home and looked up pics online so he would know what a real rainbow looks like for next time.  They both still talk about seeing rainbows on the computer.  Sometimes D even prays to see a rainbow at his house.  :)

You can barely see it in this picture, but it's there. 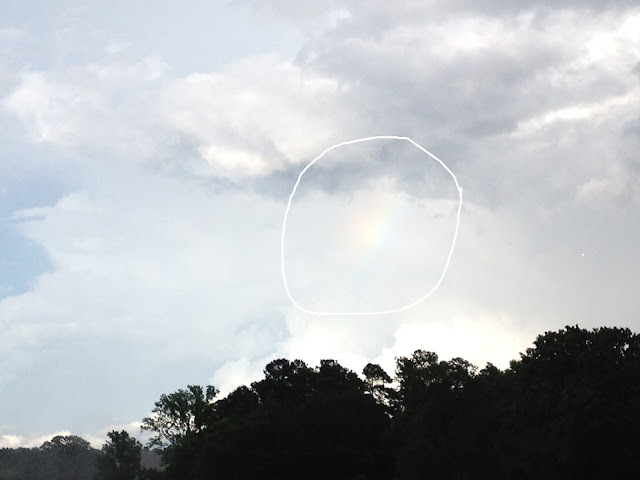 And the other randomness...

I just love this boy. 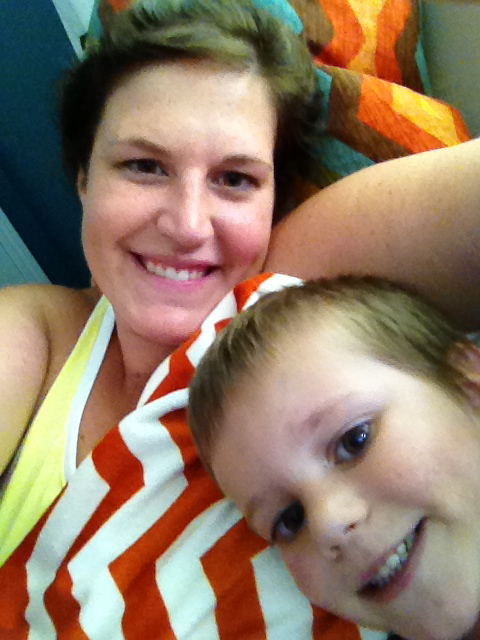 We went to the grocery store and picked up a special treat. :)

Our reward for going to the gym on Friday mornings is stopping for a smoothie afterward.  These girls are now 'Island Green Spinach and Kale' junkies. 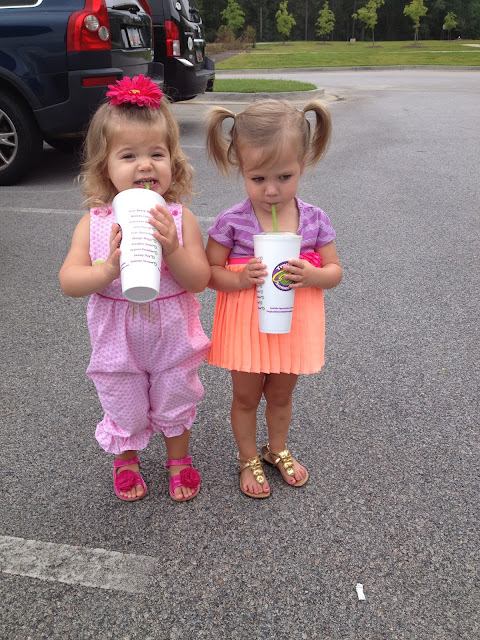 We've had lots of birthday parties lately.  A party at the splash pad

with an icee is super fun. 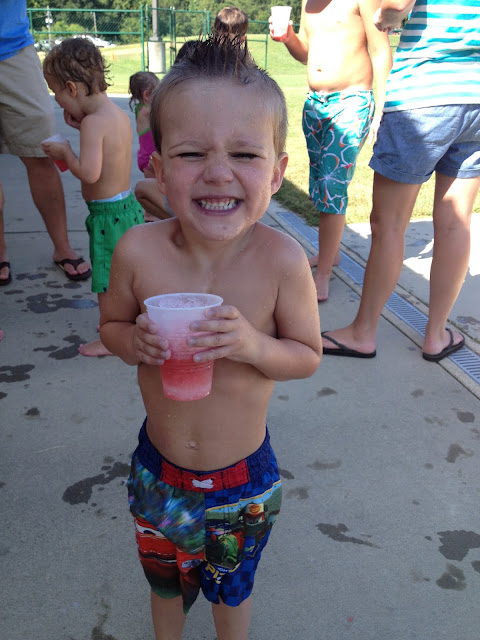 The next day we had an airplane party complete with aviators and a pilot's license, 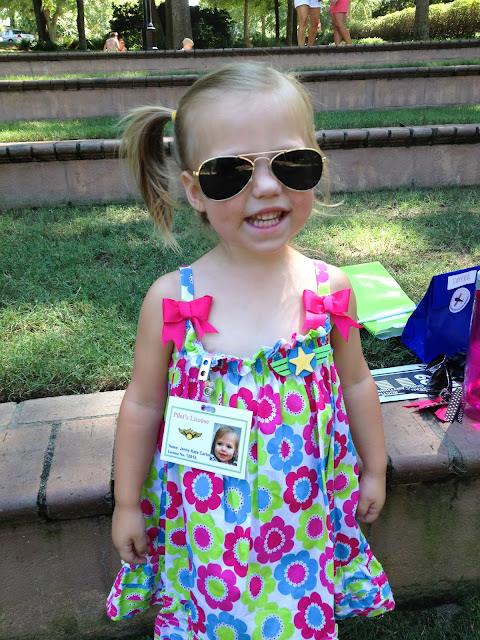 and all the girls loved the birthday boy's new wheels.  They couldn't get enough! 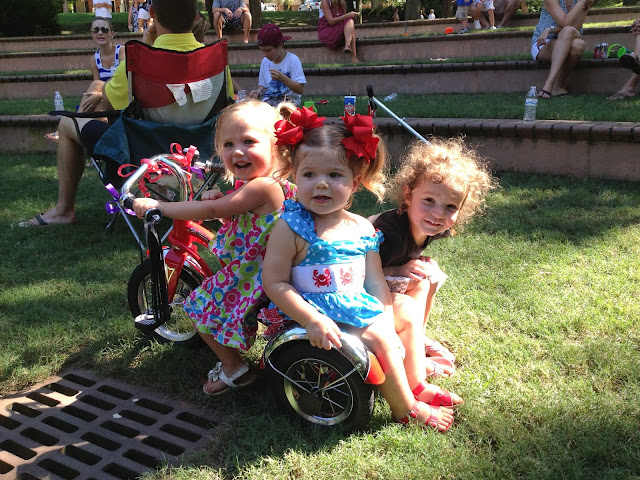 Derrick was at another party while we were at the plane party, so he enjoyed chillin in his glasses once we got home. 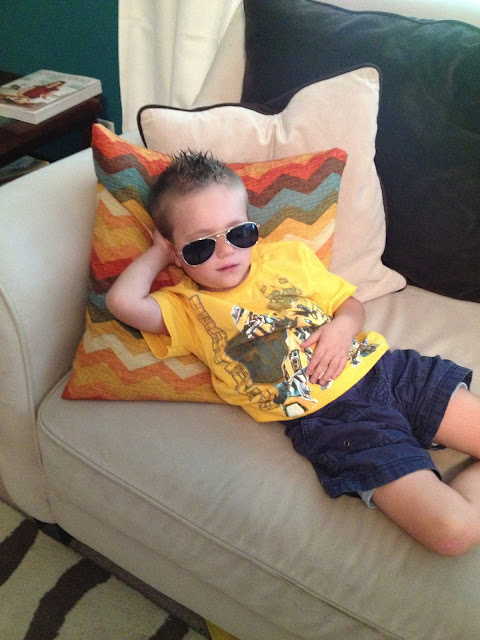 My favorite people in the whole wide world. 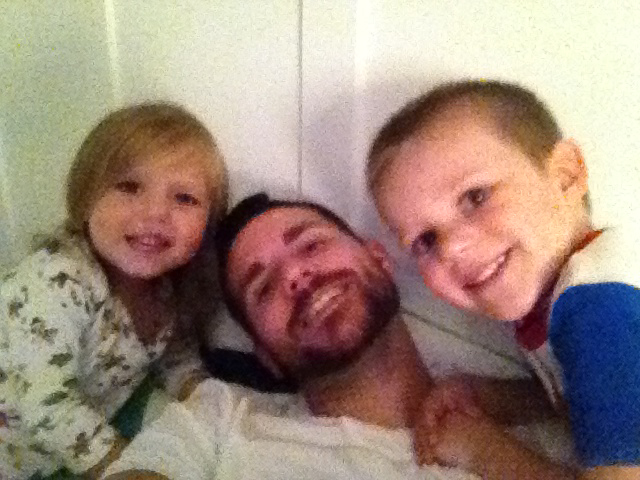 We went through a monsoon season for a minute.  These two love strolling in the rain (as they fight over who will hold the umbrella!). 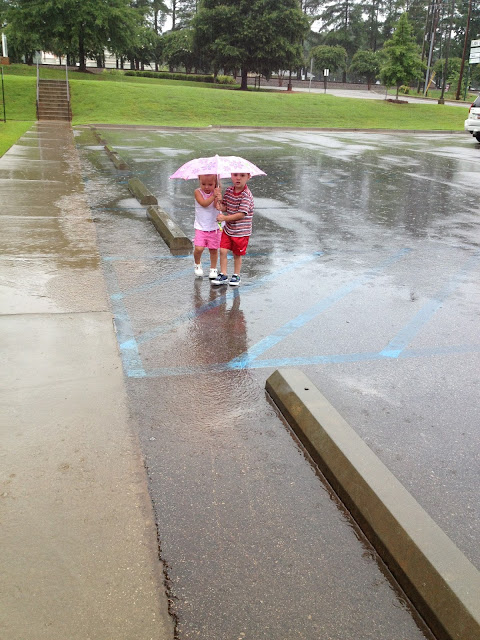 Dips in the pool have slowed down some for me, but cooler water doesn't stop these two!  Or should I say three?  We can't keep Andy out of the pool either. 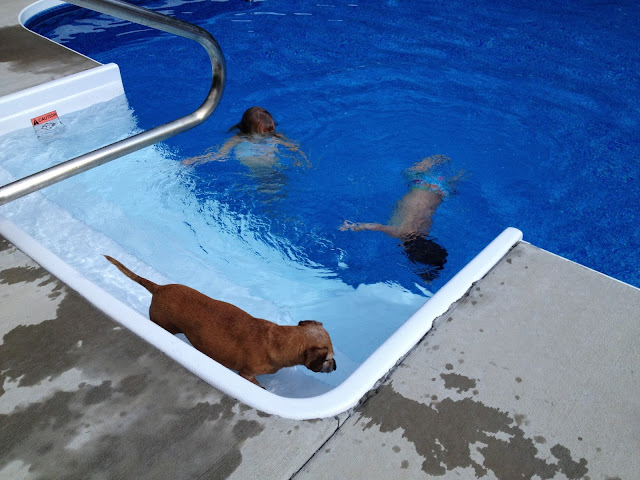 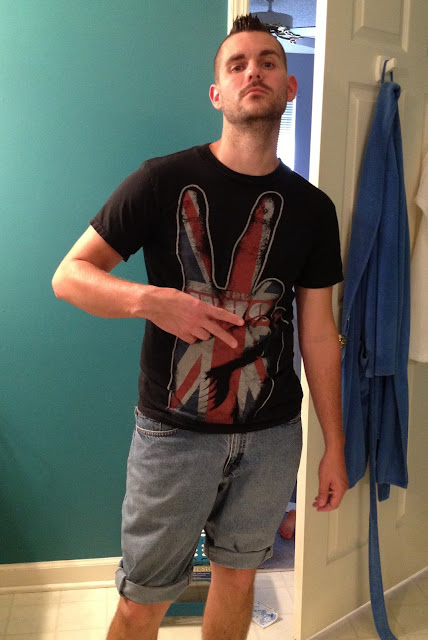 You can't really see the crimped hair and blue eye shadow, but it was there! 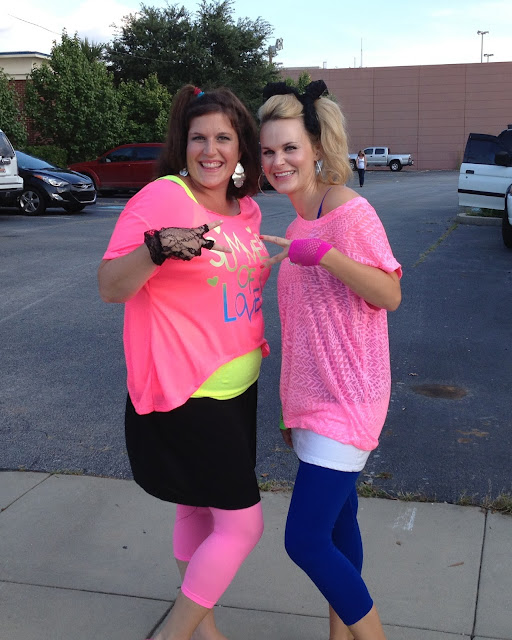 It was fun getting all dressed up, but ranked right up there with one of the most embarrassing nights of my life.  We were told "everybody" would be dressed 80's.....ummmm....nope.  Let's just say we got lots of attention.  OMG. 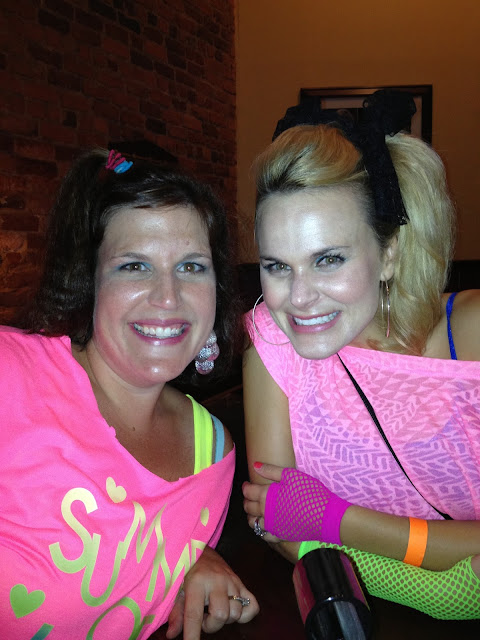 While we went out the kids spent the night with my parents.  I went to go pick them up and Andy insisted on going.  This was his seat of choice. 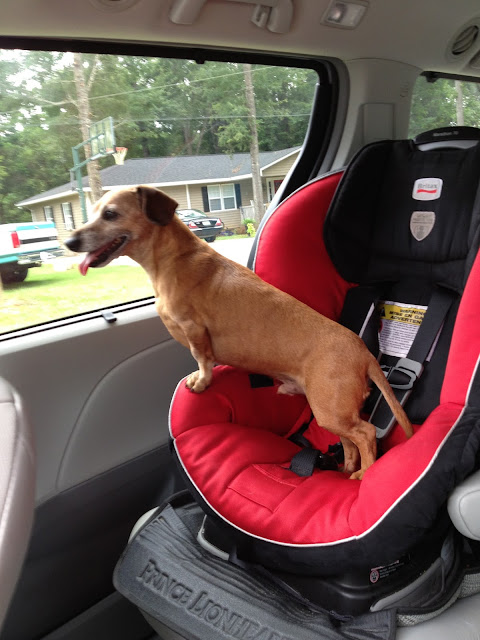 After picking them up guess where we went?  Another birthday party!! 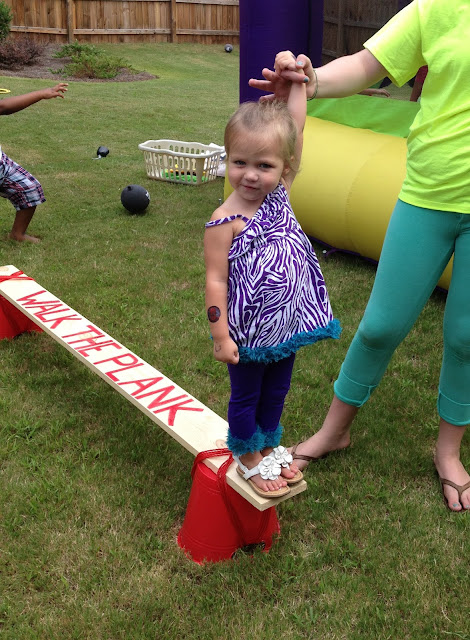 A super cute pirate party for our sweet friend Parker.  I hate I didn't get a pic of the birthday boy and my kiddos.  We sure do love him! 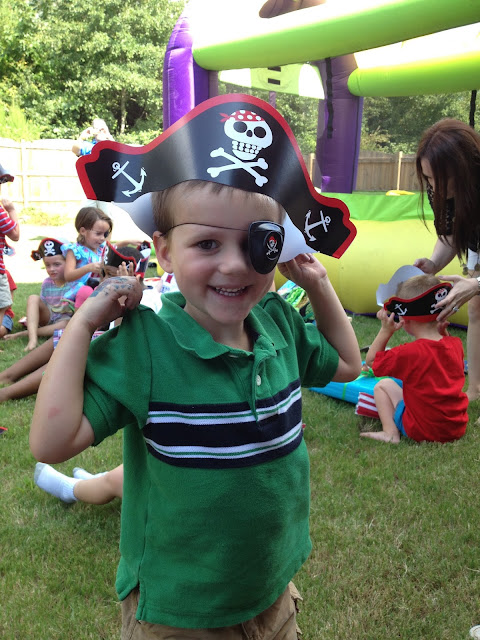 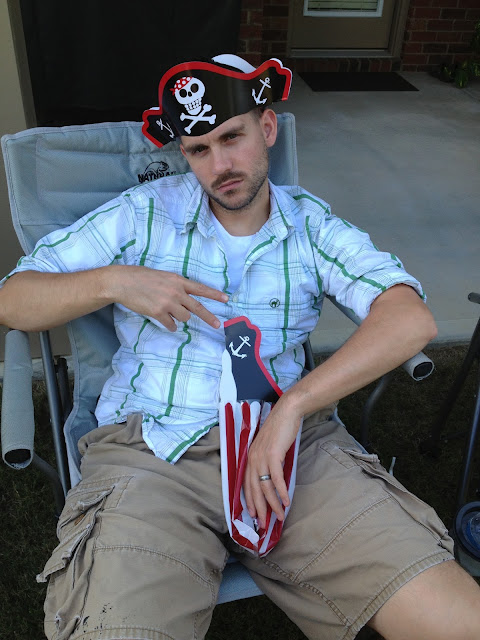 They had pirate ship rice crispy treats.  So cute!  (and yummy!!) 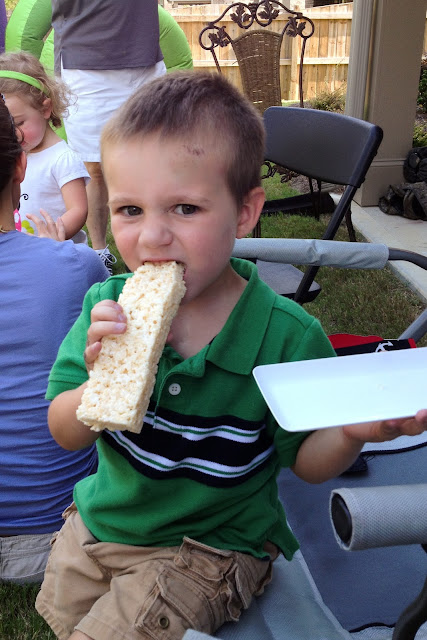 After that (whoa this was a looooong day!) we went to a concert at church.  OBB and Stellar Kart came.  It was awesome and we have some new favorite songs.  The little kids loved being right there at the stage but I was really worried about their hearing!  Derrick is literally one step away from the speaker and it was rock band concert LOUD!  I had to keep asking him to back up. 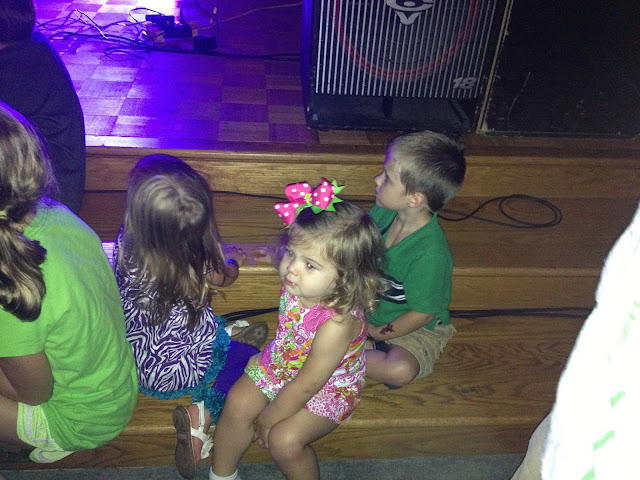 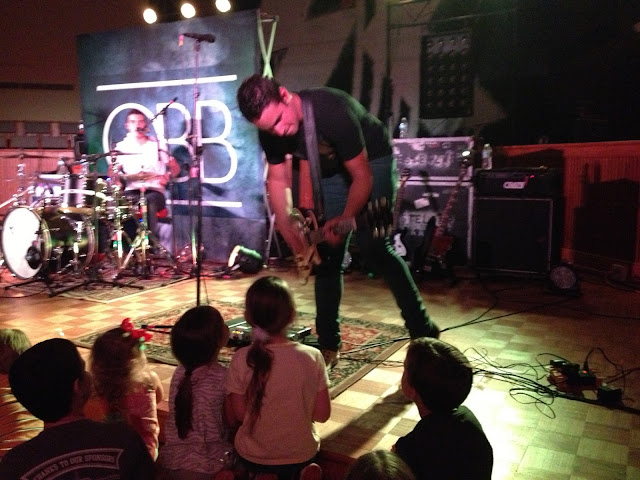 Derrick is now obsessed with Stellar Kart's version of "Kiss the Girl."  Yes, from the Little Mermaid.  It really is awesome!

Whew, that made me tired!  Next up...what we've crossed off the bucket list.