Derrick had a little anxiety this morning.

When we got out of the car he said, "I don't want to have surgery today."  We reassured him that today wasn't the day but he continued to ask questions about how long we would be here and when he could go home.  Once we made it up to Same Day some of that disappeared.  Thankfully.

Here's our pre-op day in pictures....blurry ones, but pictures nonetheless.

They had toys waiting on him when we walked in and we got the easy stuff over with first.  Blood pressure, 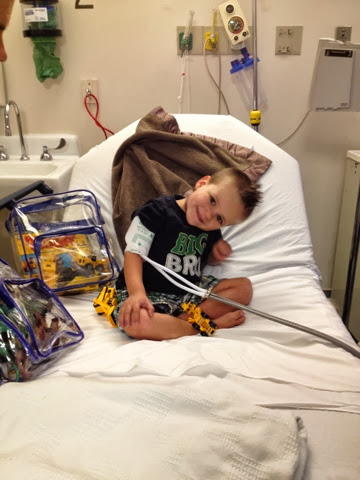 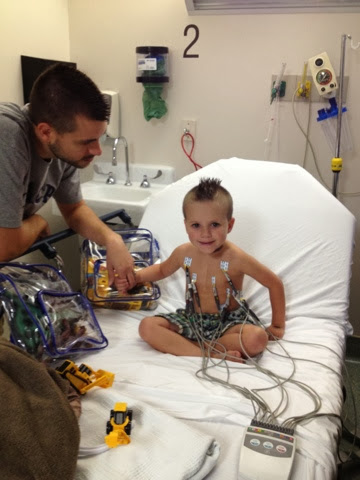 an x-ray then an echo. 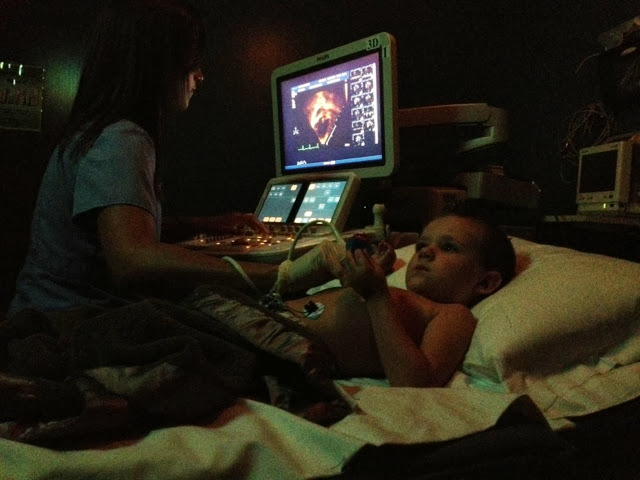 He was a fantastic patient! Until it was time for the blood draw. As soon as he saw the nurses come for the blood he freaked. He cried the whole time they got their supplies ready and while they were looking for a vein. As soon as she stuck the needle in his arm he immediately stopped crying and just watched. He sat completely still and watched the whole thing. He later told us it didn't hurt at all! These ladies obviously knew what they were doing, and apparently he feels a lot more comfortable with being able to see what's happening to him.  Totally understandable and I have a mental note about that for next time he gets shots.
After a morning full of procedures we were able to go to lunch.  Derrick insisted on his own slice of pizza. 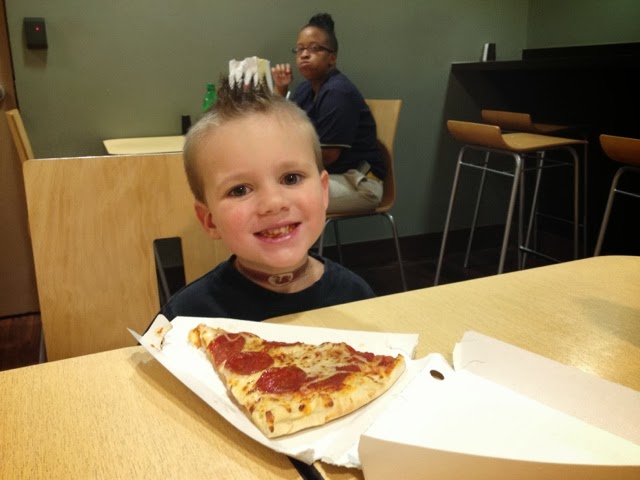 And he shocked us by eating most of it! 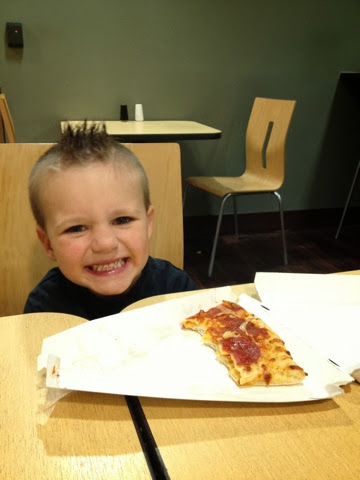 Before we could open our ice cream we were called back upstairs to go for another scan.  Back when D had his first surgery his diaphragm was paralyzed.  It didn't require any intervention, and it wasn't mentioned at his 2nd surgery.  Apparently when he had his X-ray today one side of his diaphragm was higher than it should have been so they wanted a closer look to see what they would be dealing with.  When we walked in for the scan we were told we could watch through the window but couldn't go in. We get nervous. We told D what was happening and he went right to the nurse. (Total shocker, FYI!) he waved at us from the window and did exactly what they asked of him. He even got to watch his diaphragm moving up and down on the tv, which he thought was pretty cool! 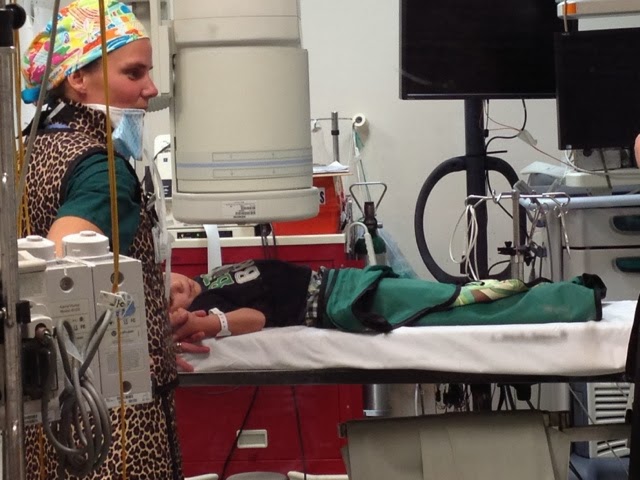 He really shocked us with how big he was today!!  We know it was the prayers! Thank you!! That made the day so much easier!
We talked to the PA for a long time. She chatted with us for at least an hour.  It was so nice because we were able to ask a lot of questions and got a lot of reassurance from her. Derrick's Fontan has an extra complication because he has dextrocardia (the bottom half of his heart is backwards and points in the wrong direction).  Justin asked her about the additional complexity of it and she told him that she's been doing this for 20 years and has seen a lot of pediatric heart surgeons. She said Dr K is one of the best ones she's ever seen. :)  That gave us the comfort we were looking for. We also talked to anesthesia, another cardiologist that will be in the OR, a PCICU Fellow, Child Life Specialist, then Dr K. 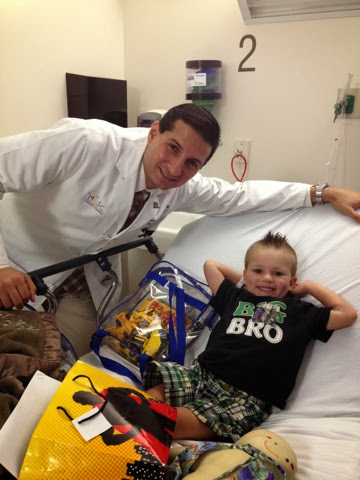 Dr K was very nice and very thorough.  He explained his plan and made sure we understood exactly what was going to happen. As he talked about the extra little complication we learned a little more.
Here's the short story of the Fontan:
The inferior vena cava is connected to the pulmonary artery using a gortex conduit which then allows his lower body blood to have a way to get to his lungs.  Usually it's a pretty straight shot, but since D's heart is pointing in the wrong direction it's not as cut and dry. We assumed they would need a longer conduit and just go around his heart but we were wrong. They're actually going to go under his heart with the conduit instead.  This of course poses other risks because its possible for the heart to compress the conduit, which wouldn't allow blood to flow through, which would mean another trip to the OR.  Dr K said the complicated-ness wasn't common, but it wasn't like they haven't done it before. So...that's where we are. The added complication isn't comforting, but knowing that God will be in that OR guiding Dr K the whole time is all the comfort we need. He is the Great Physician and nobody gets better than that!
Yesterday we took d to ride go karts and since he had such a blast and was such a big boy today we took him again...followed by lots of sanitizing! 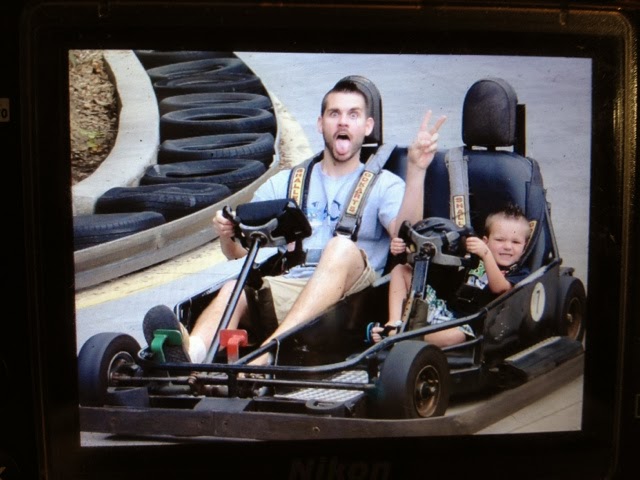 This is a picture of my camera because again I don't have Internet. Derrick is officially a thrill seeking junkie. He LOVED it! He told my mom tonight that he was asking Santa for a go-kart for Christmas. Ha!
We ended the night with some yummy seafood with the grandparents where D officially proclaimed that he will NOT be going to surgery tomorrow, he will he going home. Overall it was a good day.  Nerve-wrecking, but as good as it could be.  Minus the part where d says he's not showing up...that may be a bit of a complication. :)
Before I give you specific prayer requests I have to share my girl, who I miss terribly. She's at home with "Uncle Gramps and Aunt Mimi" and is enjoying getting spoiled. She's been decorating and doing yard work. 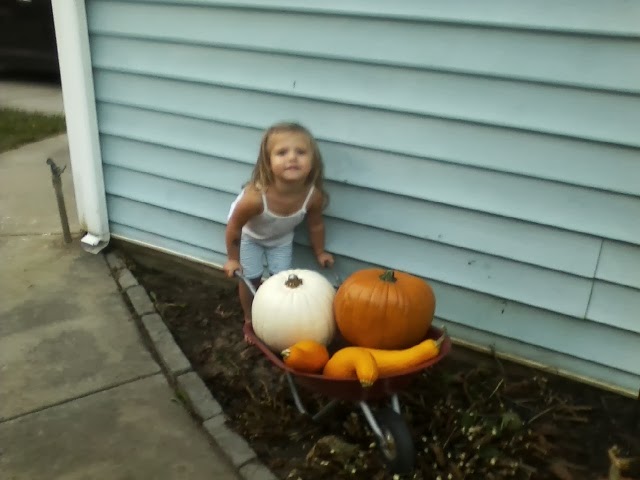 We talked to her earlier and hearing her say, "I miss you" broke my heart! I miss that girl like crazy.
Specific prayer requests for tomorrow:
That surgery goes well and there are no complications.
That Derrick doesn't have anxiety tonight or in the morning, and he continues to handle this like the champ he is.
That we will all be at peace tomorrow and are at least able to hold back the tears until after we hand him over. I don't want to add any stress to him by crying, but I'm about to hand my baby over for a risky open heart surgery where they will actually stop his heart for several hours.  I have over active tear ducts. It won't he easy for me to keep them under control.
That our friends and family who are traveling tomorrow will get here safely.
That JK handles all of this well. I know she'll be in great hands, but it's not what and who she's used to.  We miss her like crazy and I know she misses us, especially her bubba.
Jk had a cough last night so please pray that it goes away so she can come visit us on Friday.
I think that's it for now. My brain isn't working.  I'm sure there's more but this should cover most of the big stuff.  You know how to pray much better than I can tell you anyway.  Thank you all for the messages, calls, texts and everything else.  We are only as comfortable about this as we are because we can feel your prayers. We appreciate that more than you'll ever know!
We have to be at the hospital by 6 so the grands can see D before he goes back around 6:30. We will get updates from the OR hourly and I'll post them here as we get them.  I can't promise they'll come via email each time, so you may want to check back here every so often if you want up to date info.  :)
Thank you, thank you, thank you.