We had our first post Fontan check-up with Derrick's cardiologist Friday.  Already behind.  Sorry.  :)

He went in with pretty high anxiety.  We aren't exactly sure if he has a stitch in his middle chest tube site, so we told him there was a possiblilty he would have a stitch removed.   We've always believed in warning him when we know something will or may happen, but this time that was the wrong thing to do!  All of that hospital stuff was way too fresh for him to be calm about anything that could potentially hurt.

After about five minutes of being in the room we gave him a ring pop and that did the trick.  No more panicking, just a calm boy with sticky blue lips.  He always chooses blue...especially at the cardiologist.

Dr. S said he looked great, sounded great, and his sats were 96!  Yes, NINETY SIX!  In case you don't realize how big of a deal this is, he hung out between 78-82 before surgery.  Oxygen saturations of 95 are considered "normal."  Your muscles and body are getting enough oxygen at 95 to be able to perform like they're made to.  Functionally, Derrick is working with half of a heart.  We honestly never thought we'd see him pull numbers like that, even though they said it was possible after the Fontan.  We have only used the pulse ox once since we've been home, and that was the night we came home, and he was at about 93.  The pulse ox at the cardio office seems to run a little higher than the one we have at home, but who knows which one is really right??

We had a happy cardiologist, which definitely equals happy parents!  We go back in three weeks for another follow-up.  We'll go to the pediatrician next week for a baseline check and to figure out if there is actually a stitch that needs to be removed.  We learned our lesson though, we won't be talking about that one ahead of time.  Not this time!

After we left Dr. S's office we went by Yoghut for a fat free treat.  Well, a possible fat free treat.  I guess adding Reese's chunks to fat free yogurt doesn't keep it so "healthy" huh?  Anyway, D could pick almost any flavor he wanted and there was a wide variety of toppings on the safe list.  He chose chocolate and vanilla yogurt with gummy frogs. 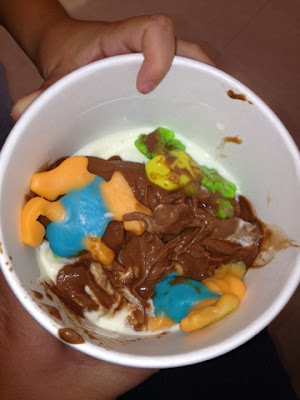 He ate zero gummy frogs and about 5 bites of his frozen yogurt, but it was a pretty normal experience, so it was worth it just for that.  He's having a hard time with being told he can't have certain things.  I guess it's extra hard to deal with when you've had people shoving food in your mouth your entire life to try to get you to gain weight, then all of a sudden you can't have any of that same food!  We're trying for as much normal as possible, and he's really doing well with it overall.  It is funny to hear him ask if something is fat free though. 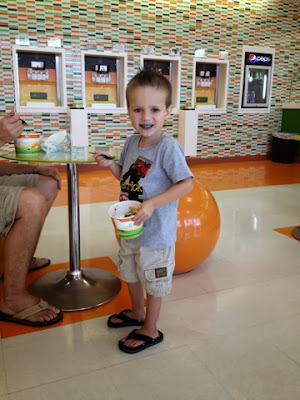 That's about all for now.  We're just mostly hanging out at home, trying to get things done before Justin goes back to work.  We've been out some but no highly crowded areas for us yet.  Gotta try to keep this boy well as long as possible!  :)

This is totally random, but it's been the hit around the Carter house for the past few days.  If you haven't had the pleasure of this viral sensation on YouTube, please enjoy.  It's been stuck in my head constantly for three days, but it is catchy and the kids LOVE it.  You can thank me later.  ;)