Today has been a long day after a very long night after a very long day.  I'm running on 1.5 hours of sleep over the past 36 hours.  I'm kinda tired.  We both are.  We're going to attempt to nap in shifts today and Justin is taking his turn right now.

Derrick had an ok night last night but he woke up about every 10 minutes.  Judging by the things he was saying when he would wake up I think he was having some pretty interesting dreams.  He woke up once saying, "No, no!"  When I asked him what was wrong he said, "Don't let Jen take it."  Throughout the night he also asked if we could go to the playroom, if he could have the basketball game he had been playing before they took him back to surgery, if he "was deserving to go ride go-karts again," and many other random things.  One of us had to be sitting beside him at all times holding his hand so he didn't wake up upset.  I'm really hoping tonight he can have some stints of sleep that are a little longer.  We'll definitely all benefit from that.

He's been in some pain today.  He's also been agitated because he has a nasal cannula that he's totally done with.  The thing is driving him bonkers!  Also, in true Derrick fashion, his armpits are giving him grief.  He had open heart surgery yesterday and his chief complaint today has been that his armpits hurt.  Go figure!  This is pretty random, much like his eyes hurting more than anything else after his cath.  We're treating it with some Nystatin powder and are hoping this does the trick.

He's gotten rid of many of the IV meds and is taking his pain and nausea meds by mouth now.  He's still on Lasix, which seems to be helping the fluid some.  His face is a tad less swollen than it was last night and while the Lasix is still in his system his urine output has increased.  Once the dose wears down the urine output decreases, which they said is normal for right now.  At rounds this morning the docs said his Fontan (xray and numbers) looked great.  Dr Kavarana, his surgeon, stopped by and was pleased with everything too.  We're happy!

We're waiting on two big things right now.  First and foremost he needs his LA wire (a wire in his left atrium measuring pressures) removed.  After this is removed he'll be able to get up and move a lot more.  It can only be removed by a surgeon and his surgeon won't be back in the PCICU tomorrow until after a surgery so we're stuck with that one a little while longer.  After that's removed he can ditch the arterial line that's in his hand which has also been bugging him.

We did a trial run of breathing room air, but his sats dropped a little lower than they'd like so he's stuck with the nasal cannula a little longer too.  The big thing he needs to do to help that is cough.  Coughing isn't easy with a freshly closed chest.  They gave him another heart pillow to hug while coughing but he isn't interested in trying.  He knows it will hurt when he coughs. :(  We have convinced him to hug DD a few times and he's gotten out some pretty good coughs but he needs to get all of that junk moving so he can get breathing better!

This picture is pitiful, but it pretty much sums up the day so far. 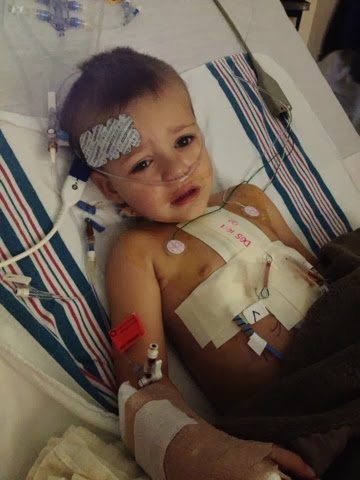 Aunt Danielle went over and played with Jenny Kate a little this morning and she sent me a few pics.  They played and painted nails.  I'm sure JK was a happy girl!  These pictures made us miss her so much.  Thankfully she's coming to visit tomorrow.  It doesn't look like she'll get to see D, but she'll get to see us and that will do us all a lot of good! 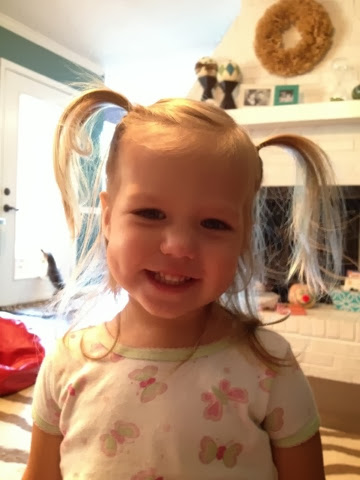 Specific prayer requests for today:
This is really hard.  It's so much harder than his other two surgeries have been.  I wish so badly that I could crawl into that bed and take his place.  He keeps asking me to hold him and it breaks my heart to tell him I can't.  I can't wait until I can hold my Cheeky and see him smile again.  :(

Thank you so much for your prayers, words, support...everything.  We appreciate them SO much!!