Today was a much better day than yesterday.  Thank you, Jesus!!  Gosh I couldn't have handled another one like that, not in a row!

Derrick has still been in some pain today, but nothing like yesterday.  He's still being really quiet but he doesn't hold back when it comes to telling you what he wants.  He's pretty darn bossy right now and really seems to enjoy giving me an extra hard time.  Last night during my "duty" he kept asking me to move him then would yell when I tried.  He kept saying, "Mommy, just get my nurse."  His nurse was busy with her other patient so he had to deal with me, but he just wanted to argue with me.   I couldn't handle his wishy washy-ness at 3 am so I made Justin wake up and take over.  That little stinker took his meds, let him move him, and was a little angel.  Rotten much?

Derrick is refusing meds by mouth.  The only time I can get any meds in him is when he's loopy from versed or morphine, which he gets via iv.  Sometimes Justin can get some in him, but no matter what, every time something goes in his mouth he says he's going to throw up.  He hasn't eaten a single bite of anything today.  He had about 3 licks of a Popsicle, which he said make him need to throw up.

On the bright side, today we had several big things happen!

The nasal cannula is gone and his sats have hung out mostly between 86-88.  Once his fenestration closes we hope he's in the low to mid 90s, but 86 is a great improvement!

He also had his RA line, art line, and pacer wires removed today!  His belly is getting a lot more bare and we like it!

Because he's not eating and is draining a "moderate plus" amount, they added on Albumin.  This will give him additional protein since he's losing a lot through his chest tubes.  His potassium was also really low so they added that on.  Dr K told us today that Derrick has to start eating and he would like him to lose the middle chest tube before moving him to the floor.  He said we may be looking at Sunday or Monday before we're out of ICU.  It's kind of a bummer, but he said all of D's numbers and issues are all very typical of post-Fontan kids, so we'll take it.

In other exciting news...I got to hold my boy!!  Best day in a long time! :)  He wasn't the most comfortable and neither was I, but we both loved it.  He fell asleep almost immediately. 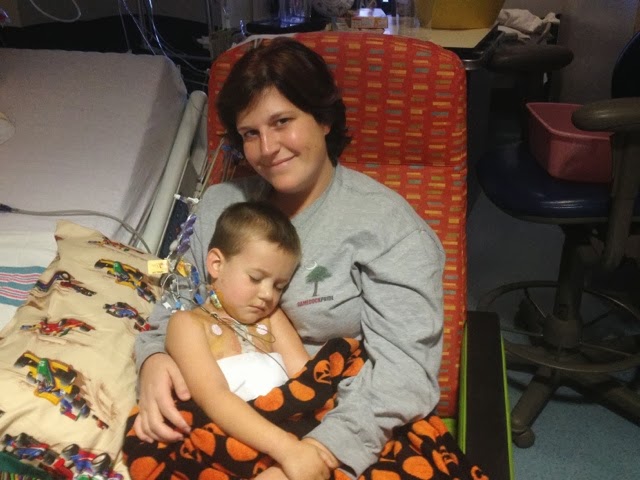 My friend Ashley visited us last night and this morning and Mamaw, Papaw, and Danielle visited this afternoon.  Justin and I got to get some fresh air and have lunch together, so that was really nice.  This whole having to eat alone thing is for the birds!

All in all today was a great day and a step forward.  Thank you so much for praying with us and for us.  I know I say it all the time, but you have no idea how much we appreciate it!