Ahhh....today was a better day!  It didn't start out with a great attitude from the boy, but it ended much better.  Justin decided this morning that we were going to stop the hefty pain med and see if that helped with Derrick's attitude.  Today he's been on all of his heart meds and tylenol for pain.  Guess what?  He was a lot less of a grump!

We're thinking that while he had a lot of pain the Oxy was very helpful, but his level of pain has dropped a good bit and it seemed like the med was doing more harm than good.  While it was killing pain it didn't bother him a whole lot, but since it didn't have as much pain to kill anymore it was making him feel kind of crappy.  He's been a different kid today.  He may get the good stuff tonight to help him sleep, but until he tells us he needs it, it's gone.

He got the central line that was in his neck pulled today.  That means no more iv anything!  All he has left now are the 2 chest tubes.  We're cleaning him up!  The lack of iv also means his drainage is down enough to stop the Albumin, which of course is a good thing.  The drainage is still decreasing so we're happy about that.  At this point he's draining about 80ml out of each tube and they won't pull them until he's 30 or less out of each one.  Of course they don't want to get our hopes up and give us any sort of discharge date, but the nurse practitioner said today that based on his trend in decreasing we're looking at maybe Tuesday or Wednesday.  Maybe!  That gives us a little hope! :)  The outpatient pharmacy brought over going home meds which means discharge is near.  That part kind of confused us, but whatever.  It means home is at least in the foreseeable future!
In other news....

We got to play with Gams again this morning.  :)  This was the best I could get with the two of them.  They're not very cooperative for pics these days. 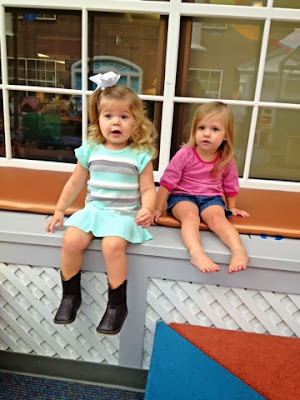 They were so funny in the elevator.  It was such a long ride they had to take a break. 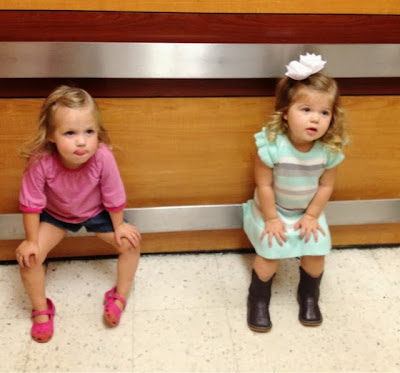 We took them outside to run around and burn off some energy.  I think Ashley and I are the ones who got a workout.  They ran, but ran out of control.  Not exactly what I had in mind when I thought it was a good idea to take them outside.  It was a beautiful day and they had fun running wild.  I'm pretty sure people were watching us like we had no control of our kids...and they were a little bit right.  But there's only so much you can do with a kid who's been cooped up in a hospital room and her little friend who follows suit. 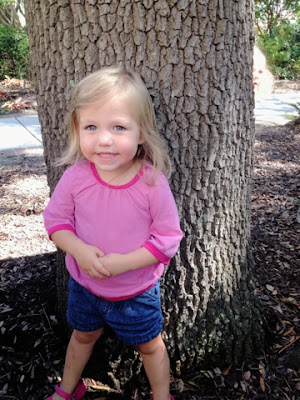 We took the girls to the Atrium to play. Derrick wasn't interested in making the trip this morning but the girls had a blast! Jk was playing patient, which totally broke the rules and I forgot until she got up.  Oops. It was cute though. 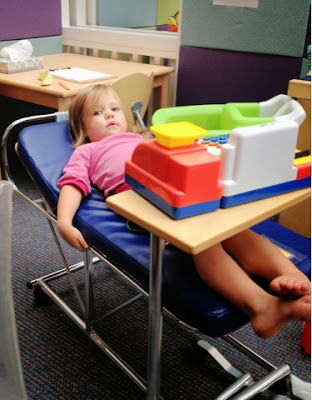 This afternoon we played in the room.  We had a lot of fun with this crayola projector that d's friend Braeden gave him. 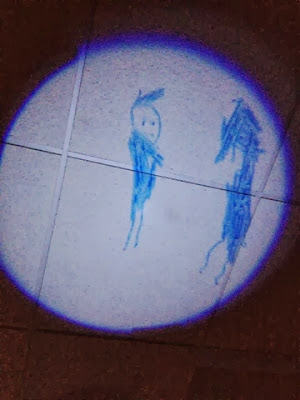 Another therapy dog, Lucky, came by.  Sadly, D was sleeping and jk had wet nails from a fresh paint job and couldn't pet him. She was pretty upset!  Lucky was too cute in his stroller. 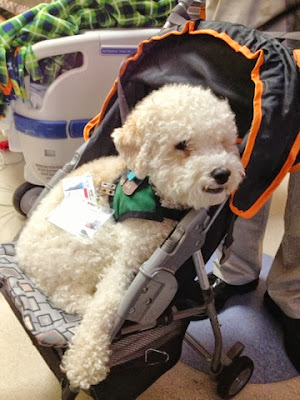 Once Derrick woke up we got special permission to be off the monitors and take him outside for some fresh air! It's been 11 days since he's been outside! He was in desperate need of some vitamin D!  There were lots of balloons around, which jk loved. 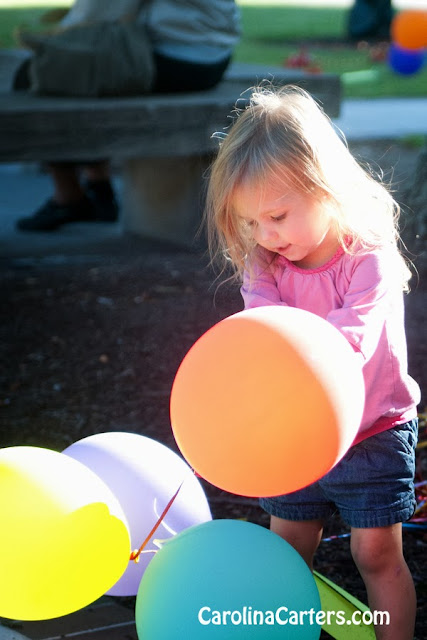 D acted like he didn't want to go out, but once he did he enjoyed the fresh air. 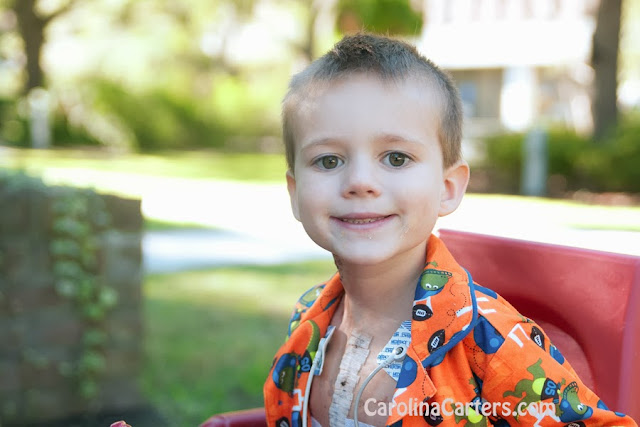 We just strolled around the horseshoe. 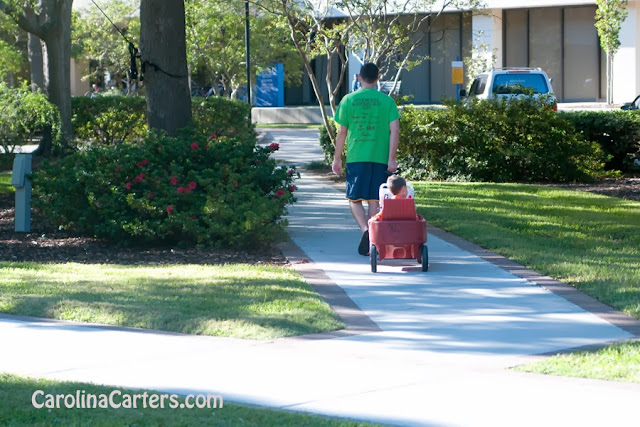 On the way back upstairs we made a pit stop. Fat free Fro-Yo! 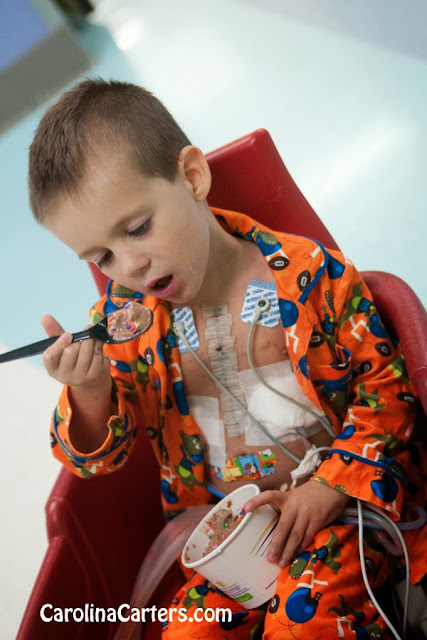 Chocolate with sprinkles is a yummy combo. :). I see many visits to Freshens in our near future. 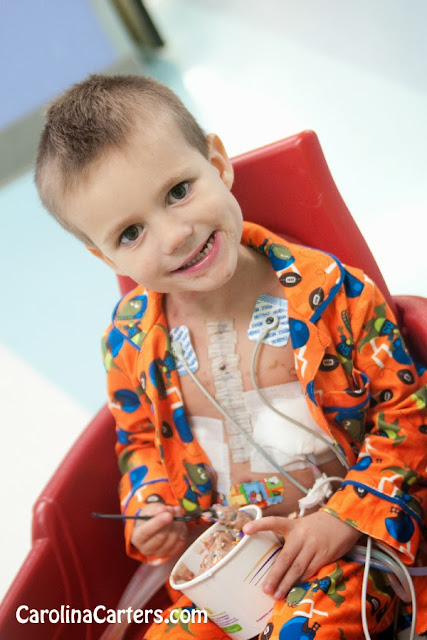 Before calling it a day we squeezed in a trip to the Atrium.  The craft for today was sparkly ghosts. 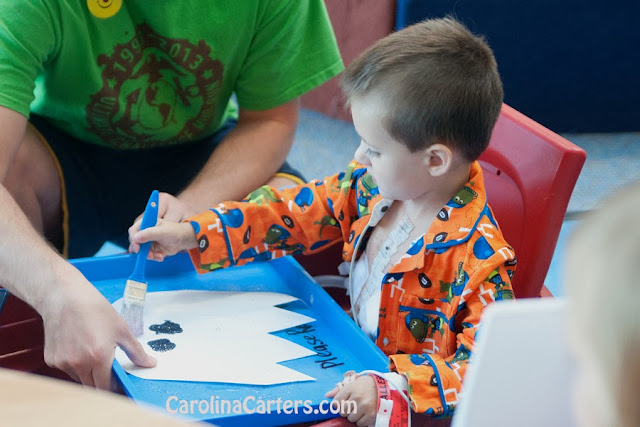 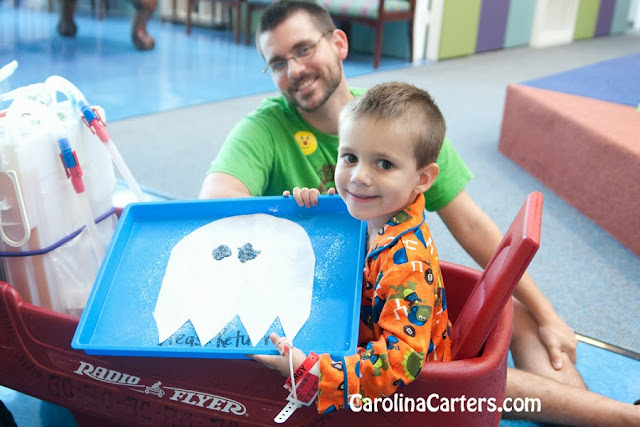 And we discovered jk's love for glitter, which doesn't surprise me at all! 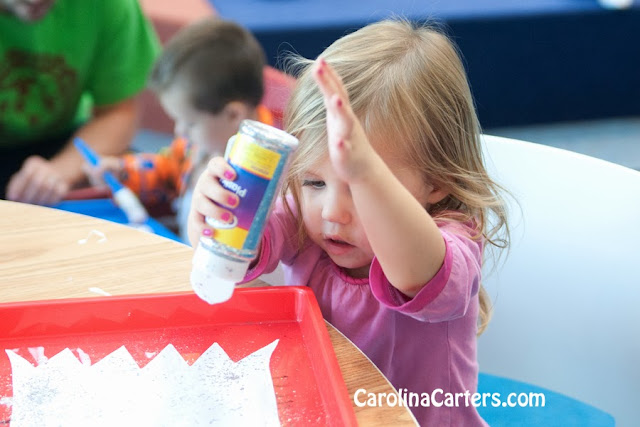 It was so nice to see Derrick enjoy himself again. He wasn't without his whiney fits, but I'll take days like this over the past two days anytime!  Jk has gotten pretty comfortable with the hospital. So comfortable it makes me a little sad, but I'm thankful she can be here.
We're off to get some zzz's.  Thank you for your continued prayers!!
Our specific requests are pretty much the same:
That the drainage stops soon.
That d's personality continues to come back.
That we can remain patient as we wait. And wait. And wait.
That we can give d some good, nutritional foods while keeping him fat free.
That he starts gaining weight, or at the very least doesn't lose anymore.
Thank you, friends!