Whew.  I'm telling you what...we had a ROUGH day today!  Our poor nurse.  He was a rock star and was awesome with Derrick, but he certainly earned his pay today!

Let me rewind to last night.

Last night was a better sleeping night.  I think we each got about 4 hours of sleep, which honestly, made me feel like a new person!  Derrick slept better and longer.  He still woke up a good bit but slept for longer stretches at a time.  He got his dressing removed, his nasal cannula pulled and his catheter removed.

This morning he had to have his oxygen turned back on. His sats were getting down to the low 80s while he slept and the lowest they wanted him at was 85.  On went the oxygen.  We also learned this morning that his RA line was not going to be removed because his atrial pressure was too high. As the morning went on he started complaining about hurting despite his pain meds.  He was complaining about his armpits hurting again and we lifted his arms up and saw that his armpits were one huge blister.  It was horrible!  They called in a wound specialist who ordered some little sponges coated in silver because she thought the problem was more of a moisture issue.  The sponges should soak up the moisture and the silver should prevent infection.

At about noon Derrick said he needed to pee. I'm sure it looked like some kind of circus act was going on in his room with four of us helping him.  He tried and tried but it didn't happen.  We decided to wait and let him try again before intervening.

As the day went on he complained more and more of pain.  His chest tubes were hurting, his back was hurting, his armpits were hurting...he was a mess.  He barely spoke and couldn't fall asleep.  He just sat staring with this sad, pained look on his face.  Every few minutes he would jump in pain then cry, although cry is probably not the word I should use to describe the sounds he was making.  He reverted back to the "whah" crying sounds.  He was pitiful.   Watching his vitals change as he complained proved to us that he wasn't just being dramatic, there was something wrong.  We didn't want to keep pumping him with pain meds because we didn't want to cover up a problem.

After another attempt to pee and several people checking him out they decided to do an ultrasound to check his bladder.  It was full and probably what was causing a lot of the other pain problems.  They went back and fourth on whether or not to do an "in and out" (to relieve him once and let him try again on his own)  or cath him again.  The catheter won.  We all decided it was best to let him rest another day, plus it would stink to have to do the catheter after the "in and out" if he still couldn't go on his own.  It's amazing what that relief did for my boy.  He was a totally different child after that, thank goodness!  It was agonizing watching him being in such pain. He's still doing some whining, but it's nothing close to earlier! 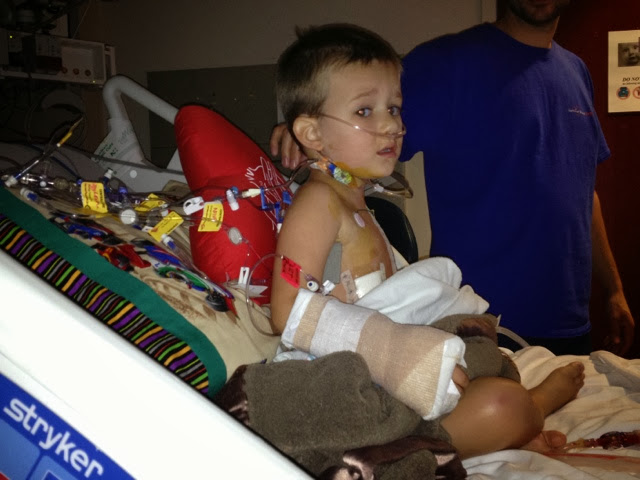 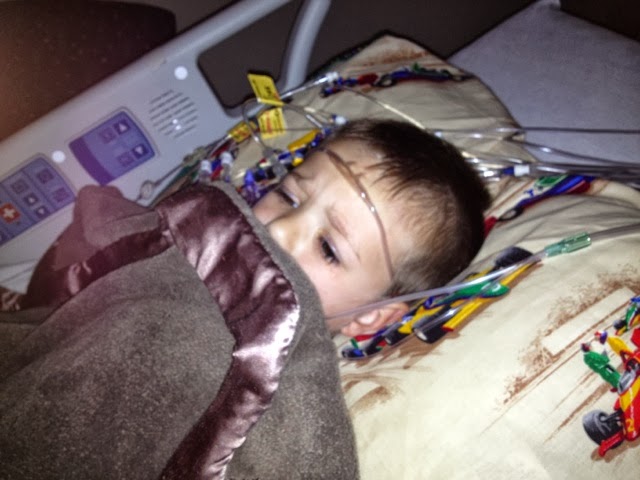 For the first time since since surgery he asked to "smell DD."

Thankfully, on such a hard day, my mom and grandma came to visit and they brought our girl!!  They sat with Derrick while we took a walk to a cute little restaurant called Hominy Grill.  It was so nice to be with her, nice to be in the fresh air, and nice to get out of that hospital!  We loved spending some time with Jen and I'm pretty sure she was equally as happy to hang out with us.  We ate outside and Jen loved trying to catch the birds that were looking for leftover crumbs.   She was flipping through the pictures on my phone and found that sad faced pic of Derrick from the other day.  She showed it to our waitress and said, "Bubba's crying.  He's not feewing wike better."  (not feeling like better)  She talked about Bubba crying the whole way back to the hospital. 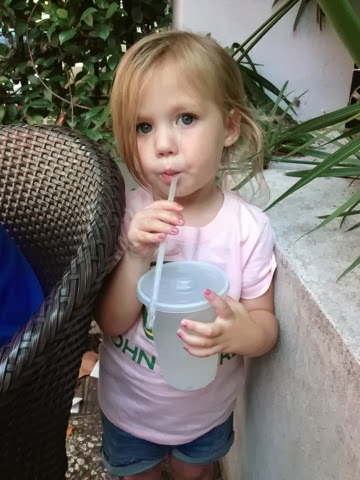 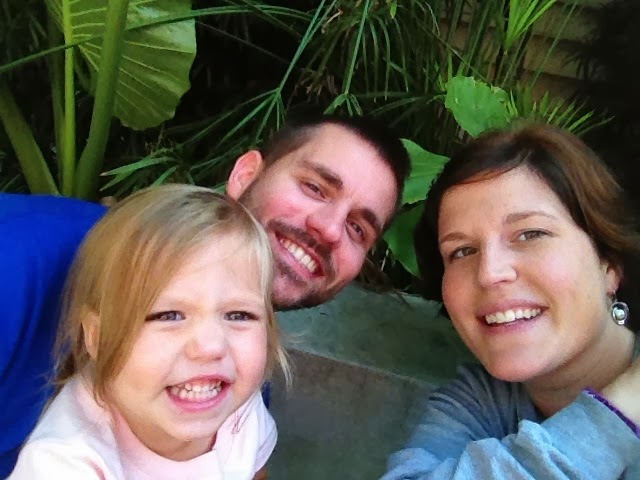 Once we got back she got to sneak in and see Derrick for a quick minute.  {What an answered prayer, thank you!!!!  Our favorite attending granted my tearful request this morning. :)}  She was happy to see him and I know he was happy to see her, he just couldn't show it.  He wouldn't talk to her; he was in too much pain.  She kissed him on the head and sweetly told him goodbye.  Even though he didn't react like I wanted him to, I know he was glad to see her and it did both of them good.  (This morning when I told him she was coming he asked, "Where's the bouncy ball I got her?"  Sunday night when we got here he had insisted on finding one to take home for her.  He loves her, his reaction to her just showed us again how awful he felt today.) 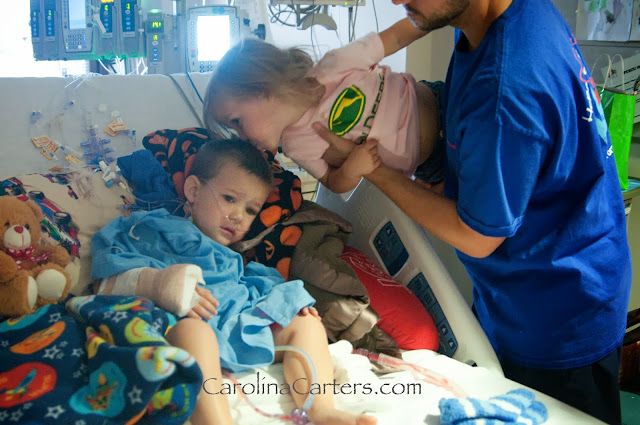 The day started pretty darn rough, but is ending on a much better note.  Derrick sat up in his bed for a little bit and he is now sleeping soundly, although he has said "Ouch, Mommy" several times in his sleep.  Let's hope that lasts a while!

Thank you again for your prayers, kind words, support, encouragement, calls, texts, food, gifts....everything!  We appreciate it all so very much.  I know y'all are talking to God a lot about us and I know he's listening.  Sometimes its difficult to pray when you're in the middle of such situations (or for me it is anyway).  I know others are lifting our needs up when we can't find the words, and when I can step back for a minute I can see the work He's done and continues to do.  These days are hard but I know how fortunate we are to be here, by Derrick's side, as he recovers from a heart surgery that wasn't even an option not that long ago.  We can hold his hand, we can give him kisses, and we can see the progress he is making getting us that much closer to home and back to normal life.  We are blessed to go through this journey, and to have you walk with us and be our strength when we need it most.

This song resonates so well with me right now.  If you've never heard it you should take a listen.


Our specific prayer requests for now:
Gosh, that's a lot!  Thanks, y'all!!