It has gotten a tad bit better in our little nook of the PCICU.  Justin had a decent nap, Derrick has actually slept peacefully for about 30 minutes straight once, and I....I guess I just feel a little bit better.  Up until about 6:00 I was honestly wondering if I was going to lose my mind.

The beeps start getting to you after a while.

Anyway, a little update on D and the potential plan....

His blood pressure is still a smidge lower than they would like.  High blood pressure is usually an indication of pain in situations like this, but the only time his blood pressure gets higher is when he's getting moved.  At that point you can almost see steam coming out of his ears he's so mad.  We've been trying to push fluids but that's a pretty slow process with him since he's drinking what averages out to about 1 sip every 20 minutes.  We upped his dopamine (med to increase blood pressure) a few minutes ago to see if that helps.  If his blood pressure isn't high enough his kidneys won't profuse like they need to, and since he's not peeing a whole lot we can't keep waiting around to see what happens.  Hopefully this will help and we can move past this issue.

Dr K has two cases tomorrow.  The plan is for him to come by between cases, probably between 12 and 1, and remove the LA line.  They'll sedate him some because it's important that he doesn't move since the wire is in his heart and could cause bleeding.  *Pray that goes well!*  Once the LA line is out he can move around more.  He will get his catheter out and hopefully that art. line in his hand removed.  That thing makes it impossible to use his right hand since it's bandaged with a board.  He's down to .5L of oxygen now and they may turn it off and see if he can keep his sats up.  It sure would be nice to get rid of the nasal cannula.  He hates it!  He's still on several meds but they plan to wean down some of those too and see how he responds.  We had to go up a little on the anxiety med, but overall hopefully we'll be shedding some stuff tomorrow!  That will be nice.  :)  He told Justin earlier to "Get all this stuff off of me!"

Justin went to our home away from home to shower and bring me some clothes.  I'm going to shower here in the Ronald McDonald Room upstairs then clean my boy up a bit.  We should all feel better tonight simply because we'll be clean!  We'll pull shifts again tonight and hopefully we'll all get a little more rest.  Tomorrow should be a busy day.  We have lots of visitors coming tomorrow including my girl!! :)

Thank you so much for the support and prayers.  Y'all are amazing and I can honestly say they've been felt.  For real.

Justin finally convinced D to give us a smile.  It was a fake one, but he wouldn't even fake it earlier today.  I'll take what I can get! 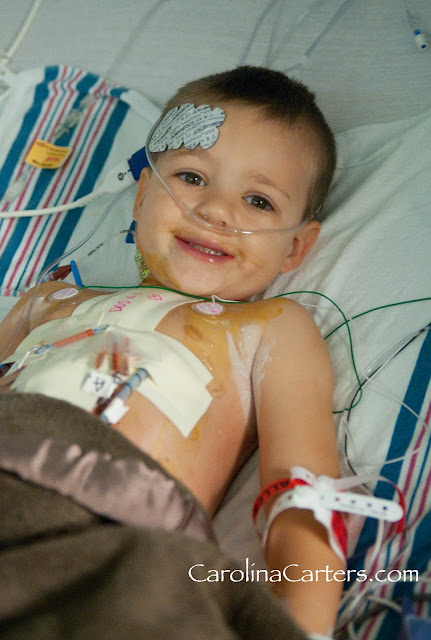