Gosh, we've waited a long time to say that.  We are officially post-fontan!  Of course we're not even close to being out of the woods yet, but we are definitely past a big 'ol hurdle.

Today has been long.  It's weird, because at the same time I can't believe it's 8:30.  Strange how that happens.  This morning while trying to get Derrick ready to go back, he threw up his Versed.  We couldn't convince him to try taking it again, so we had to go with a Ketamine shot.  Not what we wanted to happen, but he couldn't leave us upset.  He cried for a few seconds after getting the shot, gave a funny little chuckle, then was off in a spacey oblivion.  I didn't like watching him like that but it was quick and got the job done.

Surgery officially started at 9:00.  It took about 2 hours to get through the scar tissue and a little longer for the actual Fontan because of his complex anatomy.  It all finally ended at about 4:00 this afternoon and we were able to see him about 5:30.  Having great company made the day go by pretty quickly, and we're so thankful for our friends and family who were here.

Overall, Derrick is doing great.  Like I said in the last post, his surgeon said he "Couldn't be any happier" with how it all went.  His pulmonary artery was not as in the way as he thought it was going to be, so the risk of compression was not as high as he thought it may be.  (Just in case you missed it, yesterday Dr K told us that there was a possibility the conduit could compress since he had to run it under his heart instead of around it because of Derrick's dextrocardia.)  His fenestration is a little different than normal, again because of his crazy anatomy.   Other than that it was a "normal" fontan.  And I realize this paragraph may sound like another language to some of you, but my heart peeps are going to want to know these things.  :)

Derrick looks great.  Great is relative of course, but considering his busy day he really looks good.  He's not very swollen, although that could change tomorrow.  His eyelids are a little puffy right now, but not too bad.  The most exciting news is he's PINK! 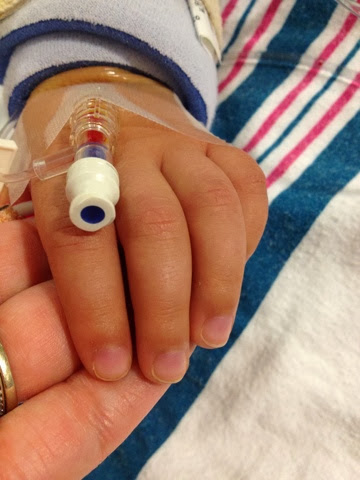 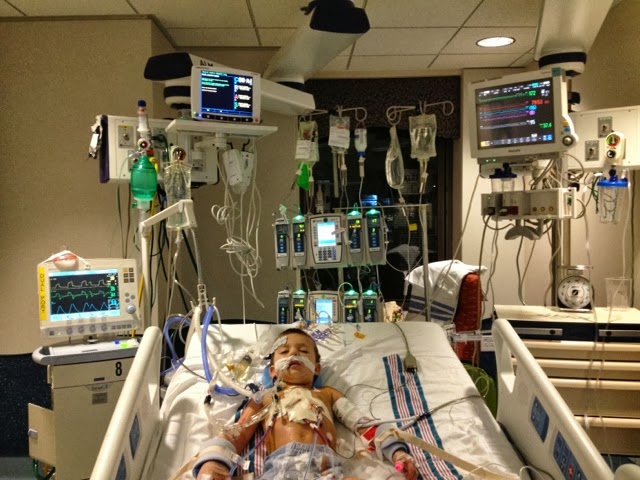 And lots of tubes and wires that we're ready to see go! 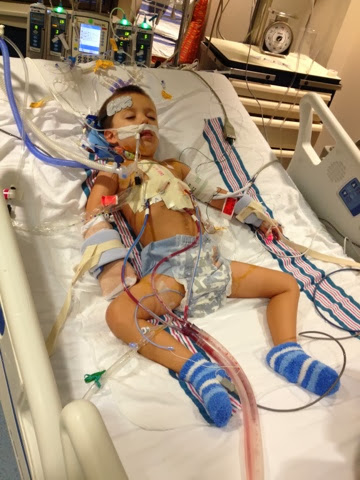 But we can see our little guy under there.  He's working on waking up and doing a CPAP trial to see if he's ready to lose the vent. 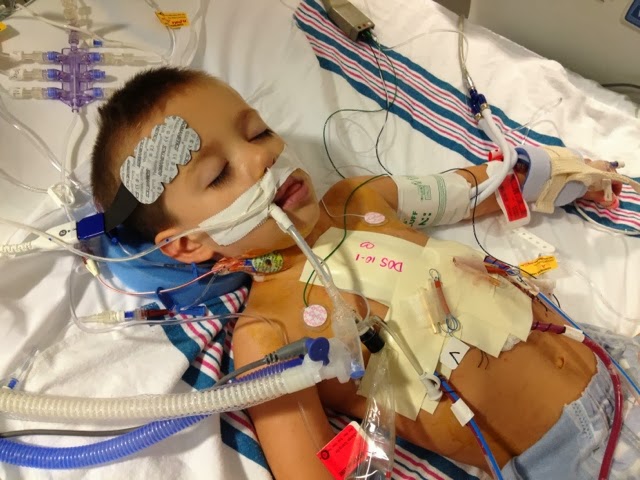 ** Since it has taken me almost 4 hours to get back to this update we've had big changes.  Derrick is now off the ventilator and now only has a nasal cannula.  The plan was to wait until around midnight, but as usual, he had other plans.  He was waking up some and not happy with the breathing tube.  He woke up and mouthed "mommy" and about broke my heart!  Since he was breathing over the vent and getting agitated they decided to extubate early.  He's had several blood gasses drawn since then and they all look great.

He has been begging for water and the little sponge on a stick isn't doing the trick.  After being turned down several times for water, he decided to ask for lemonade.  When that didn't work he asked for a ring pop.  Poor boy!  He's not too sleepy to know what he wants!  He has also asked for his Kindle, Yahtzee, and to color....all while lying there with his eyes closed.  Apparently he's ready to get on with this!

I'll update more in the morning.  It's looking like a loooong night here in the PCICU.  We're in a private room so we have a little more wiggle room with the rules. :)  I don't think either of us will be leaving this little room tonight.  He's very aware of us being here and one of us has to be holding his hand at all times.  He just got a few sips of water and a couple of licks of ring pop and seems to be content for now.

Thank you so much for all of the support today.  We are so grateful that we have so many people who care about and have been praying for Derrick and our family.  I cannot tell you how much your prayers, calls, texts, comments, messages, and however else you communicated with us has meant.  We are blessed and we are thankful.  Please continue to keep Derrick in your prayers.  The next few days are critical and will be tough for all of us.

Now to him who is able to do immeasurably more than all we ask or imagine, according to his power that is at work within us, to him be glory in the church and in Christ Jesus throughout all generations, for ever and ever! Amen.  Ephesians 3:20-21